So, the final episode of Jyu Oh Sei was a rollercoaster ride. I was on the edge of my seat for almost the whole thing. This was a good series, the plot was interesting all the way through. I think I'm going to have to watch it again :3

It's a little sad that Jyu Oh Sei is over. I won't dwell on it though, because Honey and Clover starts straight afterwards! I can't wait :D

xxxHolic episode 12 was very good for a filler episode. It was both funny and scary (I was reminded of The Ring), just what I'd expect from xxxHolic, good good.

Right, I really have the urge to fanart right now. It'll either be Clow/Yuuko or Ouran High School Host Club (I'm surprised I haven't drawn any Ouran fanart before. What have I been thinking?)

So so, I've been all over the place for the past few days.

On Sunday I left Bath for good and moved back in with my parents. I still haven't fully unpacked yet. Trying to fit ~3 rooms worth of stuff into one room = frustrating. Man, when I stop being so lazy I'm seriously going to throw loads of stuff away. I'm going to become streamlined! I'm a hoarder by nature, but when I don't have any shelf space on which to put my manga I know something has to be done *determined pose*

Also of note was a visit to the freemasons on Monday to get me some voluntary work in their archive, how exciting!

But but, there's still another week to go before the next Tsubasa chapter *whiiiiiiiiiine*

I spent most of yesterday reeling from the new Tsubasa chapter. I'm not quite sure how I managed to do anything really. You'll be glad to hear that I'm better today (but I still can't believe that there's a two week wait until the next chapter).

We went to the cinema to see 'Down in the Valley'. The story was a little slow for my liking, but the movie was very pleasant to look at. Seriously, the colours were gorgeous. I'm ashamed to say that I had a little giggle to myself halfway through when I realised that the clothes that Harlan was wearing reminded me of Richard from Big Brother.
Immediately upon coming home we watched Fight Club, but I fell asleep half-way through ^^;;;;

asdfgh spoilers for Tsubasa chapter 120 like you wouldn't believe!

I've got the drawing bug today. Give me some paper and watch me go! I might try updating some of the really old character profiles tonight (that's if I have an evening; more often than not my evenings get eaten by Big Brother, hahaha *lose*)

So, I finally recieved the results for my degree. I got a 2:1, which is not the best, but by no mean bad either. So yes, I'm pleased, although it does mean that I failed my viva yesterday (so close and yet so far!)

I'm glad I did well enough to get a viva though, it means I was boderline, when most semesters I'd actually just been a middling 2:1.

The good thing is that I don't have to remember any more biochemistry ever again :D

asdfghjkl my viva is tomorrow D:

I watched Kill Bill Vol. 1 last night for the nth time. Oh I do love that film; it's just so cool!

There was a sort of festival going on down the road from our house today. It had been going on for hours and I didn't even realise ^^; There was a pretty cool band playing; they had two guitars, a violin and a double bass. I really liked them, they were like a mixture of folk music, spanish guitar and jazz. Also, there was free cake.

So, around Easter time it was Linda's birthday. We made her a video for a present; we all filmed little bits and I put it all together. Part of the video was a montage of us dancing to her most least favourite song in the world, 'Don't Cha' by the Pussy Cat Dolls.
Recently, the dance video found it's way onto YouTube (Steve uploaded it). So I thought I'd share it.

Things to note:
- Steve is dancing in the toilet.
- Nick is dancing with both Linda's pillow and her Russian dolls.
- James got into his "pole"-dancing a little too much.
- My dancing is super (clearly).

The cover of chapter 5 is now up.

I didn't even realise that it had been a while since the last page; I was too caught up with my new layout.

Okay. Okay. I have a viva on Tuesday. Either I have been picked at random for one or, more likely, I am borderline for my degree classification. The viva will determine what classification I get. So, no pressure then. My whole degree rests on one interview *hyperventilates*

I think I shall revise.

It's been a busy couple of days. I haven't had time to draw at all, but don't worry, I'll start on chapter 5 pretty sharpish.

So, on Tuesday evening we took a ghost tour of the city. The thing is, that despite being a rational scientist, I am intrigued by ghosts. I shouldn't believe in them...but I kinda do a little. So I found the tour equally fascinating and scary (apart from the bit about evil ley lines, oh come on). The tour guide was a bit rubbish, and apparently he's been able to contact the spirit world since the age of 4 *scoffs*. If your name isn't Watanuki, I don't believe you.
The scariest bit was where we went down into this dell where, apparently, people used to fight duels. The story goes that the dead people from the duels were laid out in a tent for the family to see them, and that they are still present in ghost form today. The guy said that the tent had been recreated in the form of an extra large holly bush; I immediately thought of those hydrangeas in xxxHolic at this point. The bush is unusually hollow and has a 'door' in one side. We all had to walk into the bush and close our eyes and see if one of the ghosts touched us. The guide urged us to take photos, so I did. 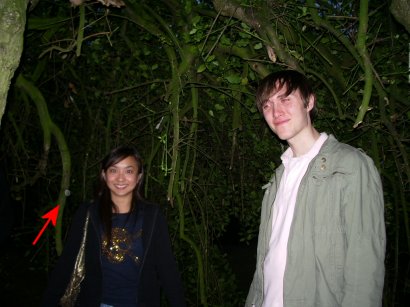 By Linda's shoulder, highlighted by the arrow, is what may be an orb, one of the most commonly seen ghostly appearances. Is it a ghost? Is it a trick of the light? Is it a piece of dirt on the lens? *Geordie accent* You deciiide.
Personally, I'm a little skeptical, but we definately didn't see it when we were in there, and there was no dirt on another photo that I took that evening :/

Also visited were two art galleries, and an example of a Georgian landscape garden (see below). The big house is currently a school so we weren't allowed to see inside D: 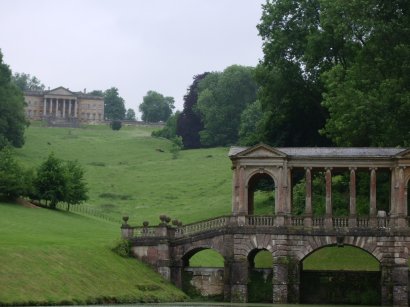 We also went to see the Da Vinci Code, which I had been waiting to see for AGES; we just had too many exams to see it when it first came out. I'd heard quite bad things about it, so it actually turned out to be better than I'd expected. There wasn't as much in the way of explantations as there had been in the book, which is understandable, but a shame because they were the most interesting parts of the book. Luckily though, the action, which was tedious and boring in the book, was made more interesting in the film, so it's all good. I particularly liked Sir Ian Mckellen, even though he didn't really look like I thought Teabing should, because he is lovely. Also, it made me laugh when he let them into his mansion by saying "You may pass" (LOTR joke). Also also, I kept thinking of the council of Elrond, when he mentioned that council to decide what went into the Bible *loser*

The new layout is done! It took longer than I expected, which was partly because I went on another bus tour right in the middle of putting it up >_>

So, after contemplating layouts based on the Mighty Boosh, Green Wing and Fay, I decided to ignore those and go for robots instead. Because everybody likes robots :3

Copied from the about page:

Robot style this time because robots are undeniably cool. The photo used in this layout was taken by myself; it features Nick sporting an awesome Daft Punk-style robot helmet that was made by Steve. The two songs that inspired this layout are, 'Robot Man' by The Aliens and 'Robot Rock' by Daft Punk.

If you want any more robot themed songs, I suggest listening to 'Half Man Half Machine' by Goldie Lookin Chain and just about anything by Daft Punk.

You should also listen to MSTRKRFT if you haven't already. Not really anything to do with robots, but they are awesome. Just over a month until the album comes out and by golly I can't wait.

If you know of any other robot songs then please let me know.

Songs about robots >>>> Other songs

So Saturday was our graduation ball. We went for a meal first, which was very very tasty (sadly I couldn't eat much because my dress was quite tight and I could hardly sit down let alone fill my stomach). We then went up to campus which had been transformed (or maybe not, but there were a few more lights and tables than normal). No matter where it is, any excuse to dress up is fun right? Have some photos (the first two were stolen from my housemates): 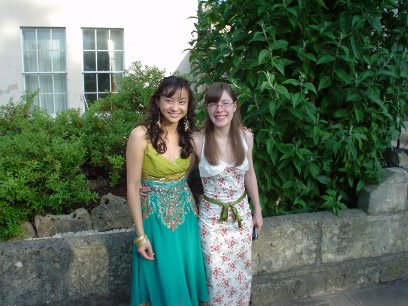 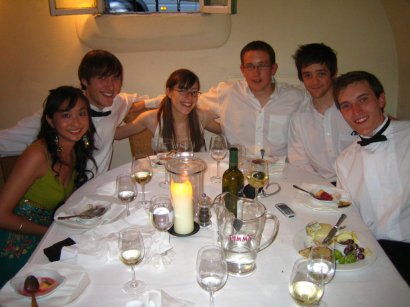 All housemates together!
From left to right: Linda, Nick, Me, Jon, Steve, James. 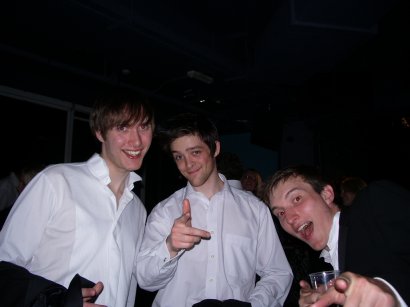 Oh, but my feet hurt so much at the end of the night (why are the prettiest shoes always the most painful?)
Then followed much sleeping on my part, a picnic and a farewell to James who had to move to London (he starts his new job today OMG). Today we vsited the abbey (I was wearing my threadless God&Dog T-shirt, which may have been a bit of a faux pas) and then went on an open-topped bus tour. Later there will be risotto followed by Big Brother; the high life! Hahaha.

Also also, I will probably changing the site layout this evening, so expect things to look a tad funny for a bit.

I feel so proud of myself that you wouldn't believe :D

Man, finishing my degree is the best thing that's happened to me in a long time. Not to mention, the weather has been really summery and beautiful since I finished my exams. I have been genuinely happy for the past 5 days or so, it's wonderful.

Things to do today:
Watch at least some of the football (come on England!)
Go to my graduation ball (expect photos)

I'm going to try and update more frequently from now on.
Yes, this is the start of something beautiful!

Tomorrow I have to have this interview thing about the final year project I was doing this semester. I really have no idea what they are going to ask. I hope I can remember enough about it from when I was writing up my report hmmmmm.

Oooooh. After having about *thinks* 6 weeks of solid deadlines, this feels like a dream come true. My general well-being needs this so much.

As soon as this interview is over I am going to:
- go home for the weekend
- draw (so so much)
- make a new site layout
In that order.

So, all going well, expect new Clematis next week!

Also! Also!
I have recently come across the Japanese duo Depapepe. Such pretty uplifting music! Listening to it is like having a long summer afternoon in my head :D