Summer has been so nice this year! Where are the cold temperatures and the endless rain that we've had to put up with for the past few years? I have no idea!

I've mostly been spending my time having picnics and going to the theatre (more on that later). And yesterday Claire was visiting and we took ourselves off to Notting Hill Carnival. I don't have any photos because I wasn't sure how safe my camera would be in the heaving crowds, but it turned out to be a good experience. The whole of Notting Hill was like one massive street party fuelled with dancing, bright colours and the smell of jerk chicken. We had fun.

In other things of note. This: 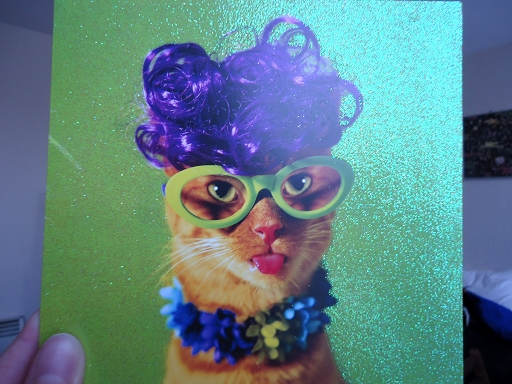 I received a birthday card from Linda! It deserves a special mention because it's travelled to London from Luxembourg twice. Originally ending up at the wrong address it got returned to sender and Linda was kind enough to send it out again. What a well-travelled card!

And as for the rest of this blog post, here's a run down of things I've been watching and listening to recently:

The Great British Bake Off
Not much to say about this yet because the new series has just started. I'm so happy it's back on TV though! It's like everything is right with the world when there's a mixture of cakes and Mel and Sue making bad puns on my TV.

King Alfred and the Anglo Saxons
I've come to the conclusion that I love every one of Michael Wood's history documentaries. This one is about the Anglo Saxons and is just as fascinating as I was hoping for. Watching it is my weekend treat.

A Field in England
I watched this film when it premièred on the TV. Here's the trailer. I enjoyed it! The direction was very nice to watch (bar one overly-long strobe sequence) and the story kept you on your toes. Bear in mind, though, that you will get to the end of the film without having any idea of what it was about. It's not an easy film to decipher. The best part though? I liked the historical feel of it; it was very 'show not tell'. Other films might have made a meal trying to explain what the Civil War was all about, but this film didn't even touch on it. The setting didn't need to be explained; it just was.

All in all, very enjoyable, and the only thing preventing me from purchasing it is that I can't bear to watch that strobe sequence again.

Welcome to Night Vale
So, I've gotten on the band wagon and have started watching this podcast (links to where to listen to it here). I wouldn't call myself a super-duper fan, but it is certainly fun, often laugh-out-loud funny, and shockingly cinematic for an audio-only medium.

The premise of the podcast is that it is a local radio show based in a small town in the US where every single horror cliché and stereotype is real. I'd call it a cross between The League of Gentlemen's radio show (only less of an obvious sitcom) and Blue Jam (only slightly less creepy).

I'd say give it a go if you're interested. Make sure to listen to the episodes in order though because they often refer back to things that have happened in previous episodes.

Random Access Memories by Daft Punk
I'm sure you've all heard the super catchy Get Lucky, right? Daft Punk's new album seems to be a trip back to their slightly more funky roots and I am all for that. Some of the tracks are a little slow and a bit too experimental for me, but some of them are great.

For example: I was listening to Lose Yourself to Dance while hanging up my clothes from the washing machine and before I knew it I had stopped what I was doing and had started dancing around the room like a weirdo.

So, yes, I approve. Once again Daft Punk prove that they are what we know them to be:
Sexy sexy disco robots.

The Sound of Music
I went to see this show at the Regents Park Theatre with James, Eppa, Steve, Heather, Eppa's sister and Heather's brother. Luckily, with it being an outside theatre, the weather was nice and not rainy in the slightest. We even had a picnic before the show!

Now, here's where I admit I've never seen the film before. Embarrassing, I know. This meant that I got to enjoy the full force of the plot, while somehow recognising all the songs anyway.

Overall, I really enjoyed this show! The songs were very uplifting (there's a reason why the film is so popular) and the actors had great singing voices. I actually felt energised after watching it, and I was left humming My Favourite Things for days afterwards. Oh, and Captain von Trapp was rather hot totty too, which I hear from a good source always makes the show more enjoyable.

If I've learnt anything from this show it's:
1. If you're expecting a happy ending, watch out. It's likely to be ruined by Nazis.
2. Nazis can be defeated through music.

Top Hat
And another musical! I saw this one with Claire this weekend at the Aldwych Theatre. Once again, I'd not seen the film, but most of the songs were familiar already.

I have to admit, I didn't enjoy the singing in this one as much as The Sound of Music. And while the dancing was good, I couldn't help feeling that it probably wasn't quite the same as Fred and Ginger.

That said, I enjoyed the show, especially once the farce got going. I love a good farce.

Martin Chuzzlewit by Charles Dickens
I've just finished reading this book and I was shocked by just how much I enjoyed it. I wouldn't say it wasn't without its flaws (see also: God, Dickens really hated America back then; the gratuitous use of American stereotypes gets a bit boring to be honest. And also: none of the female protagonists appear to have much of a personality at all.) If you can overlook those parts, then it is a good read. The plot's a bit odd in places, but the characters are mostly great and the book is really really funny. There's a lot of physical humour in it, which I didn't even realise was possible in book form!

For example, take this scene, just after Mark Tapley has knocked on Mr Pecksniff's front door:

A person of Mr Tapley's observation could not long remain insensible to the fact, that Mr Pecksniff was making the end of his nose very blunt against the glass of the parlour window, in an angular attempt to discover who had knocked at the door.

Did I mention that I loved the characters? Of particular note are the good guys, John Westlock, Mark Tapley and Tom Pinch. John Westlock is endearingly romantic, Mark Tapley is pretty much the only person with any sense in the whole thing, and Tom Pinch? Well. I haven't been such a fan of any character for a good couple of years.

At the beginning, I thought Tom Pinch was going to be a joke character, but he pretty much turns into the main protagonist (or was that all in my head?) Once I got halfway through the book, I found myself feeling rather frustrated when reading any chapter that didn't have Tom Pinch in it. As a character, he's foolish, certainly, but he's also utterly adorable!

And here's the part where I descend into spoilers. Click the link below for more:

I have to admit, I never thought I would start shipping in a Dickens novel of all things, but I was wrong.

For the majority of the book I was absolutely certain that Tom Pinch and Mary Graham were going to end up together. They were so cute around each other! There were even ridiculous puns about church organs!

I was really quite disappointed, then, when it didn't happen. And while John Westlock and Tom's sister Ruth were very sweet together, it didn't quite make up for the lack of another romance in the Pinch family. Sigh.

Charles Dickens, what were you thinking? What am I thinking getting so het-up over this book?

I just... Tom Pinch is so adorable! Bless his cotton socks!

I forget if you said you enjoyed the new Daft Punk album or not. Barring the few experimental tracks, I like it!

I hope you guys had a good time away!

It’s very convenient that the card ended up back at Linda’s. Some would say too convenient.

And I kept meaning to ask you about daft punk, but now I don’t need to!

Sorry to hear that A Field in England didn’t work out for you!

That Anglo Saxon stuff is definitely worth a look though. Especially if you want to find out more about a time when the Danelaw was in full force and when, apparently, all saxon kings were called Ethel.

I have mixed views about Dickens. As a story, I found Oliver Twist to be dire, whereas I absolutely adored Great Expectations. Chuzzlewit isn’t quite up there, but I got really into it as I went along.

please forgive me for going lowercase warrior on your blog, i am mobile at the moment.

i tried to buy ‘a field in england’ off itunes and it screwed all my stores up (i fixed them eventually) and i wasn’t able to buy it anyway. THEY ARE FORCING ME INTO A LIFE OF CRIME! FORCING.

definitely gonna look up some of those anglo-saxon documentaries, on youtube if nothing else. for seamus heaney, and freedom.

i will never forget crowley’s characterization of heaven as ‘the sound of music’ stretched out, phenomenally, into eternity :]

i’ve never read ‘martin chuzzlewit’! my threshold for dickens began to approach nil in high school when i found out what a dick he was. which is a childish reaction, of course. i’ll throw ‘chuzzlewit’ on the pile and pray for rain.