I was away on holiday with my parents last week.

We didn't go far, just to a village in Suffolk, very close to the border with Essex. It felt like miles away, though, compared with the rough and tumble of London. The joys of hearing birdsong, having a whole detached property to yourselves and being able to see the stars at night should not be underestimated!

Oh, and the weather was great too. Now I'm back home, we seem to have descended into the first blip of autumn, but last week was a different story. It was warm and sunny and I hardly saw a cloud once!

Here's a recount of what we did.

The village we stayed in was were John Constable grew up and the surrounding area is known as Constable Country.

I got to acquaint myself with Constable's work while I was there. Many of his paintings are of a rural idyll bathed in the warm light of a sunny afternoon. They're pretty in a calm sort of a way and are subsequently very popular. If you don't know someone who has a Constable picture on their wall, I will be surprised! 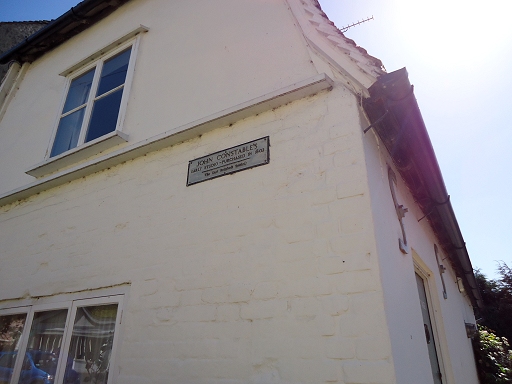 This was Constable's studio. 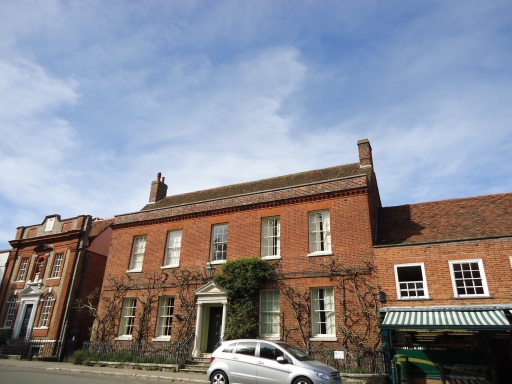 And this is a village over the river, where Constable went to school. I'm not entirely sure, but I think the school he went to was the building on the left. We certainly found graffiti in the brick-work that could be his: "J.C. 1787". 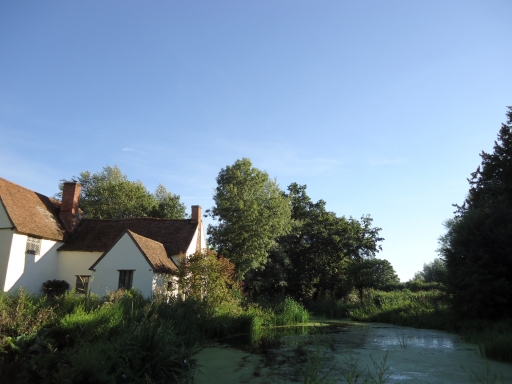 This picture was taken just outside of one of the mills that was owned by Constable's father. The building is Willie Lott's House (not 'Lots of Willies House' as I liked to call it); Constable painted it in The Hay Wain (not the 'Wayne' as I also called it; God I was annoying that day). 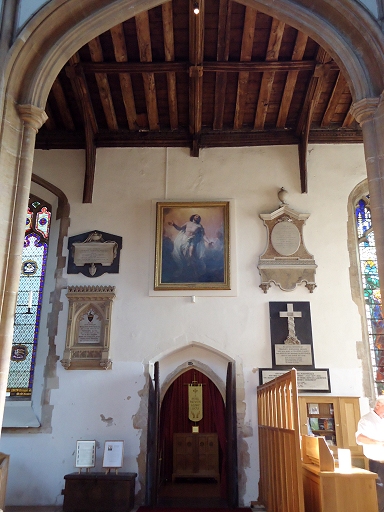 And this was taken inside the parish church at the village where Constable went to school. Up top there is his painting, The Ascension. A bit different from his normal subject matter!

It was lots of fun to walk in Constable's footsteps. The area doesn't seem to have changed much since his time so it's quite easy to imagine it as he saw it. Oh yeah, and Constable seems to have been quite the attractive gent too, so that helps.

Following on from that last photo, here are some more photos of churches. I love wandering around a parish church because they're normally one of the oldest buildings in the village. They always seem to be filled with hints and puzzles about what was there before. 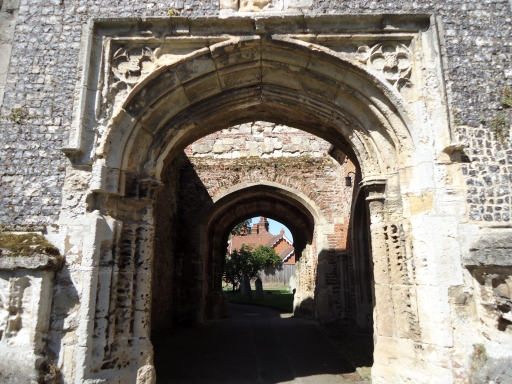 This is part of the parish church in the village we stayed in. It was built in the 15th Century. The most striking feature is its tower; or rather, its half a tower. For some reason, presumably a lack of funding, the villagers stopped building the bell-tower when it was only half-way finished. This photo shows an archway that was meant to run underneath the tower. But the walls don't go much higher than this, and as you can tell from the sunlight between the arches, the tower doesn't even have a roof. 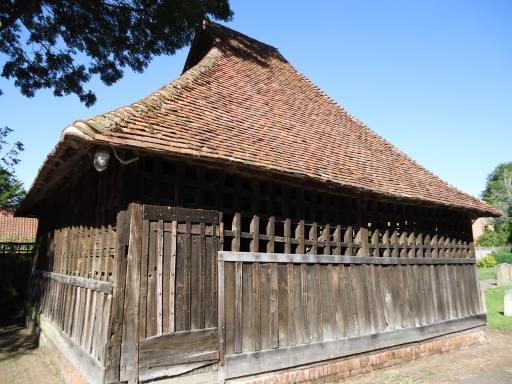 Without a tower to put the bells in, the villagers put them in this (what they had initially thought was temporary) bell cage. 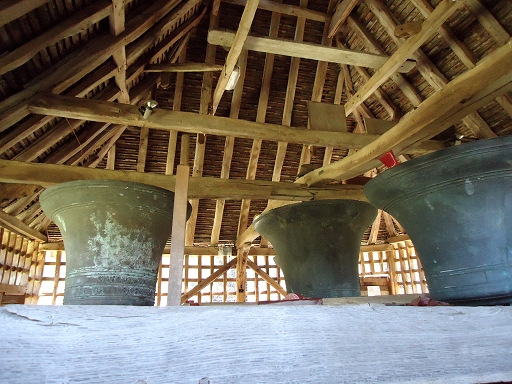 Inside the bells are left pointing upwards, waiting to be rung by hand. 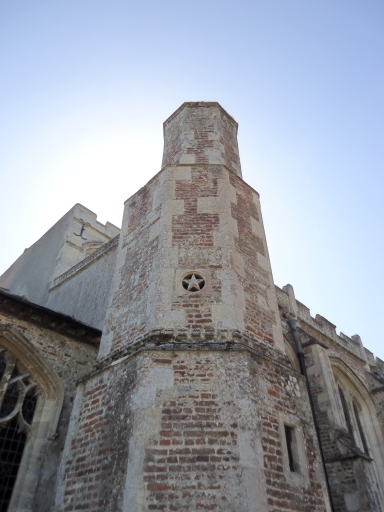 I think this tower contains a staircase. The star was the emblem of a local family. 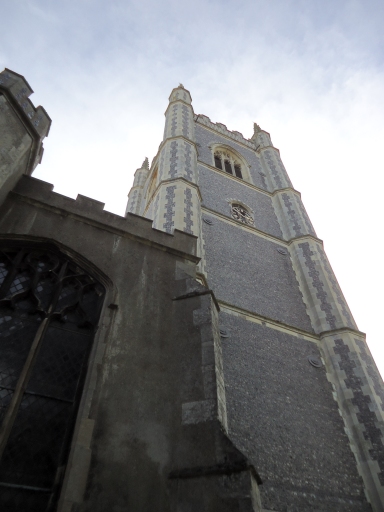 And here is the church that contains Constable's picture of The Ascension. It was also built in the 15th Century. This photo shows the tower that the previous church was trying to copy. Only these guys actually managed to finish theirs. 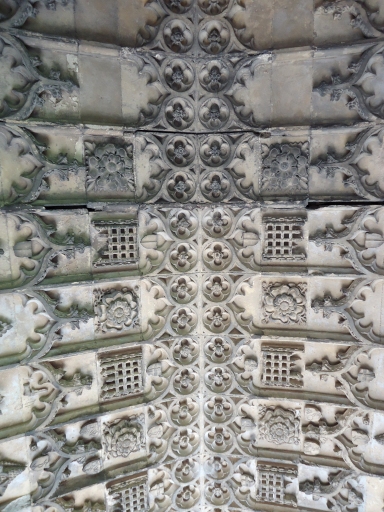 This tower, like the failed one, has an arch underneath it. Only this one actually has a roof, and very pretty it is too. 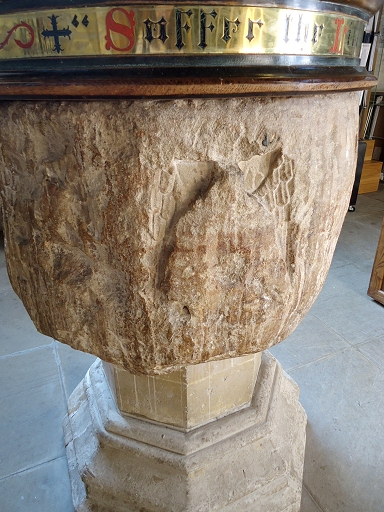 The area seemed to be very heavy on the puritan side during the reformation. According to the story, this font was found in the churchyard where it had lain for centuries after being dumped. You can even see where it had had angels on the outside before they were struck off.

What with recent TV documentaries and the Anglo-Saxon history book that I've been reading, I am on such an Anglo-Saxon kick at the moment. The dark ages are fascinating because I know next-to-nothing about them. But it was a time when all sorts of traditions and governmental structures were laid down. Shire boundaries! Manorial landholding systems! Place names! Ahhh!

And so I forced my parents to take a trip up to Sutton Hoo and its famous Anglo-Saxon burial ground. 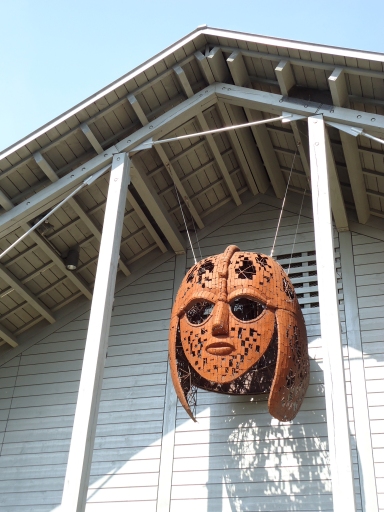 Here's the entrance to the exhibition. It wasn't a large exhibition, and all the original finds are at the British Museum in London, but it was really interesting nonetheless. 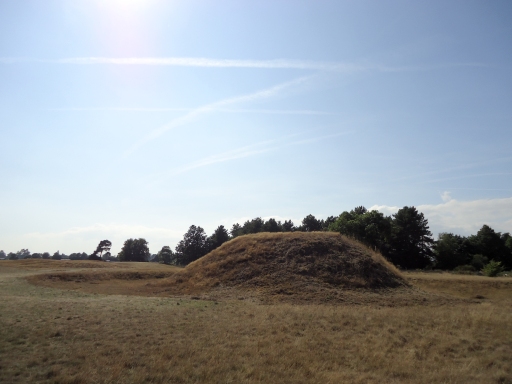 This is one of the burial mounds. It's been reconstructed up to the size it would have been when it was originally made. Imposing. And eerie. You can tell why later Anglo-Saxons thought it would be good to use the place for executions. 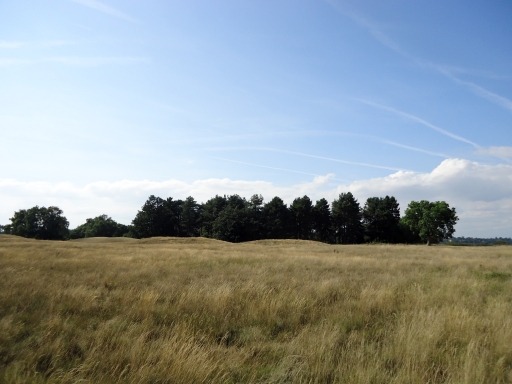 These are the mounds as they are now. Some have been completely flattened by ploughing.

And here's a replica of the famous helmet. It may well have come from the grave of Raedwald, King of the East Angles and High King of all the Anglo-Saxons in the south of Britain. Whoever it belonged too, it's some serious bling.

So there I was, wandering through the countryside and caught up between Regency painters, 15th Century church-builders, and dark-age warriors. It was nice. I like to feel the roots of a place when I'm there.

And, well, it was all rather pretty in the sunshine. The ground is quite flat so the views stretch a long way. There were green fields, a lush river and grand cottages that were painted 'Suffolk pink'. You can tell why Constable wanted to paint the place. 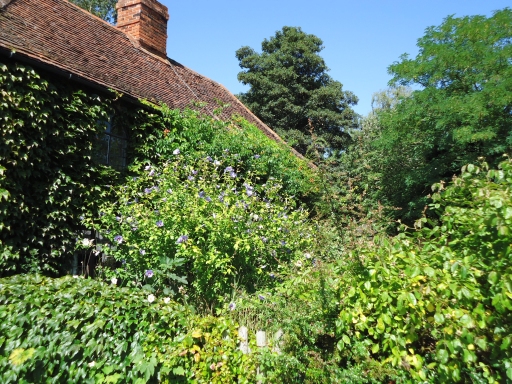 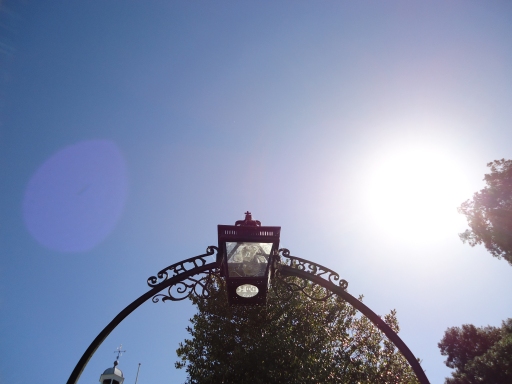 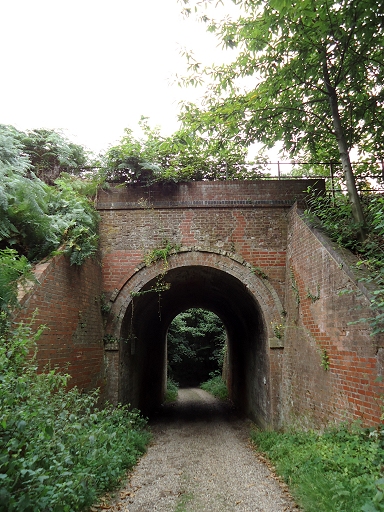 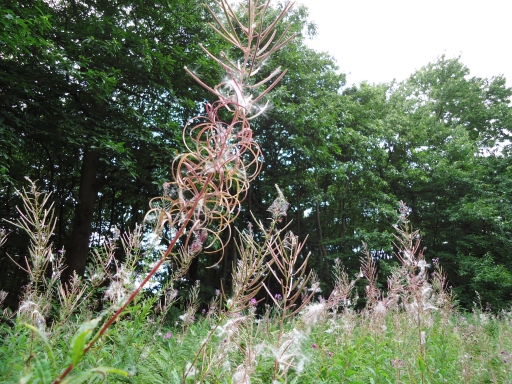 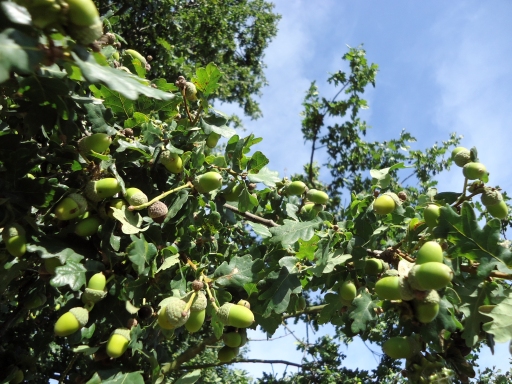 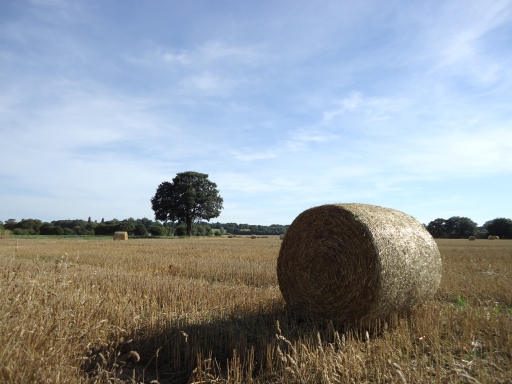 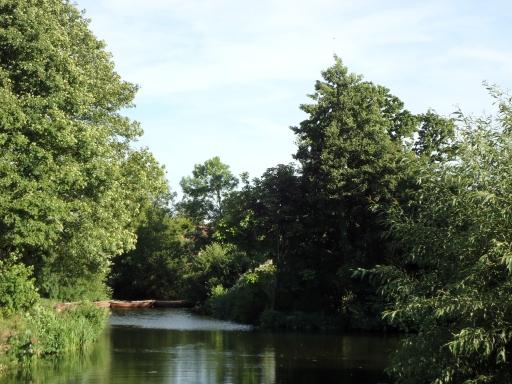 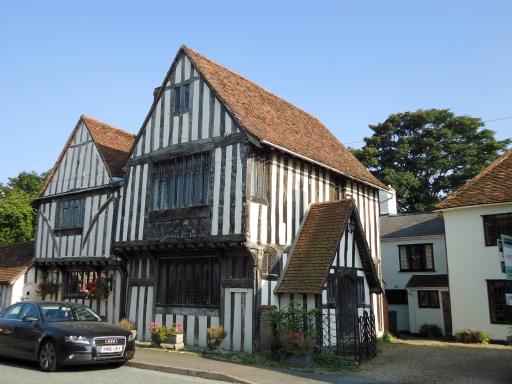 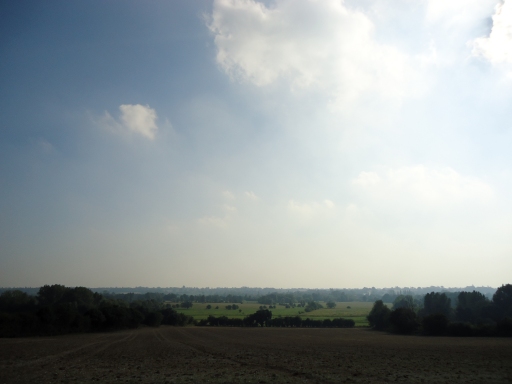 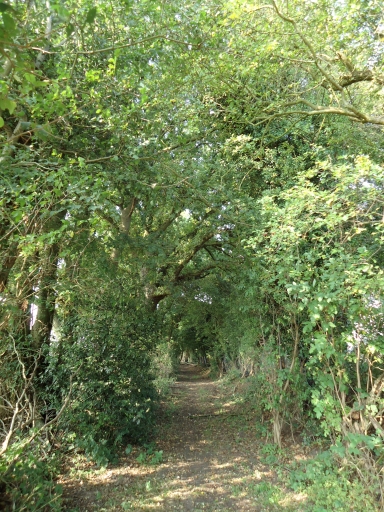 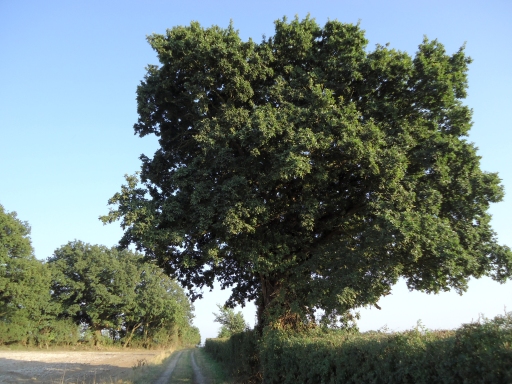