I've finally found time to make another food post! This one spans a couple of recipes in my old kitchen, then a long hiatus until I had the time to start cooking in my new kitchen.

And what a joy it is to cook in my new kitchen! the hobs aren't great but I love having so much space to myself. The one thing I haven't mastered yet though is the lighting in my new flat; it's all a bit dim, so apologies if some of these photos are a bit more murky than normal. 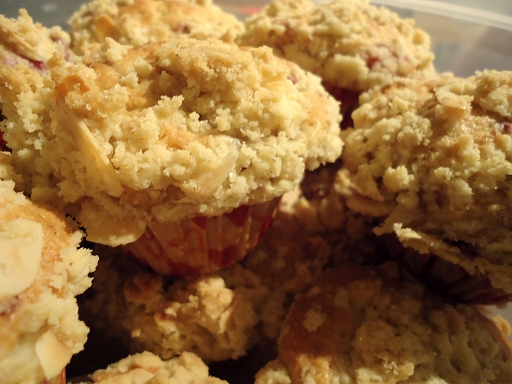 Exploding berry crumble muffins (recipe from Mother's Little Book of Home-Baked Treats)
I took these to work and they went down very well. They're raspberry muffins with a crumble topping and are really quite nice with the tartness of the raspberries matching the richness of the topping (and they turned out to be massive too). The one downside is that the crumble topping goes all over the oven when you're making them! 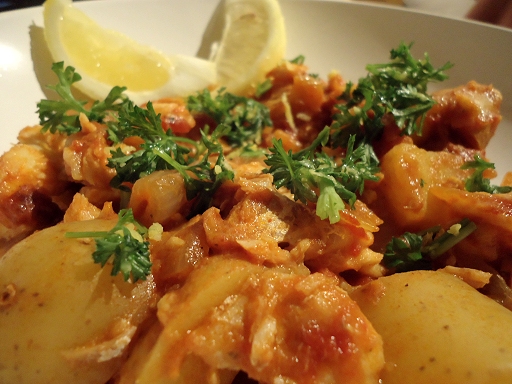 Fish stew with lemon and parsley
I used normal paprika for this instead of smoked, large potatoes cut small instead of new potatoes, and I couldn't find fennel seeds for the life of me. That's as maybe. This was still a nice stew; there was something about the fresh lemon and the parsley on the fish that took me right back to the seaside. 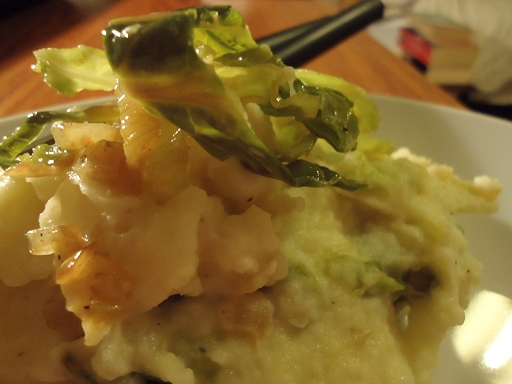 Colcannon
Oh, man, this is perfect winter food. It's claggy, stodgy and warming. Not to mention super tasty for what is essentially mashed potato. 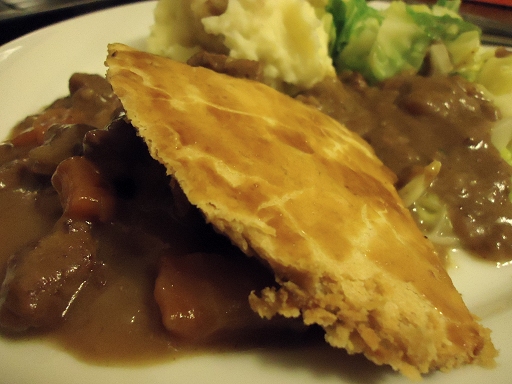 Beef pie
The recipe is for a beef and Guinness pie, but I'm not keen on Guinness so I left it out. As a result, the pie was alright, but I think the Guinness would have given it a depth that mine was lacking. 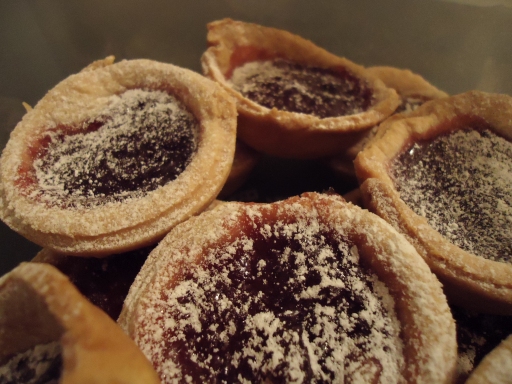 Jam tarts (cobbled together from a number of recipes)
I'd bought some pre-made shortcrust pastry for the beef pie and it needed using up, so I did what any self-respecting 5-year old would do and made jam tarts. Without a recipe to hand, I cobbled together a few recipes that I found online. Overall, seeing as I've never made these as an adult, they came out well (of course, that's all down to the fact that I didn't make the pastry myself). Some of the pastry needed to be rolled a little more thinly and I didn't have a cookie cutter so improvised with a mug but, bah, I don't mind. They were sticky and sugary and just what I needed to keep up my energy levels during a cold week (there was no sugar in the pastry, so I went crazy and sprinkled icing sugar over the top too). 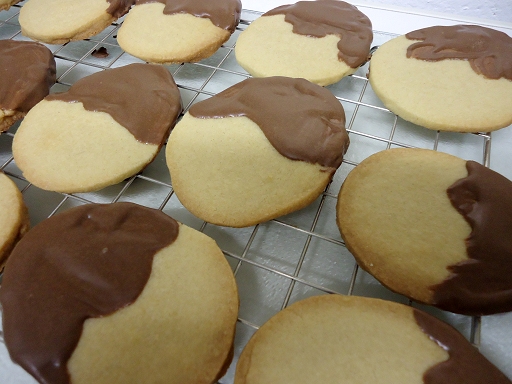 Egg-shaped cookies with melted chocolate
I made these for my parents for Easter. As biscuits go, they seemed to be a kind of chocolate-coated shortbread. They were also really really nice. I didn't have an egg-shaped cutter, so I made a template out of paper and cut round it, which seemed to work. 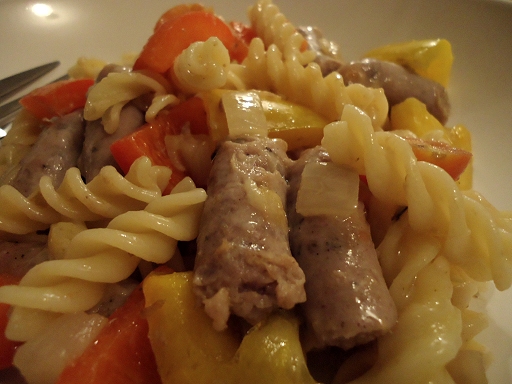 Marcello Tully's grilled sausage pasta
This one was ok but, God, it needed far longer in the oven once it was assembled; on eating, I found it had only been warm rather than hot when I had taken in out of the oven and the peppers weren't cooked. As far as taste goes, it was ok, nice with the cheese but nothing to write home about, and I'm still not sure how I feel about anchovies. 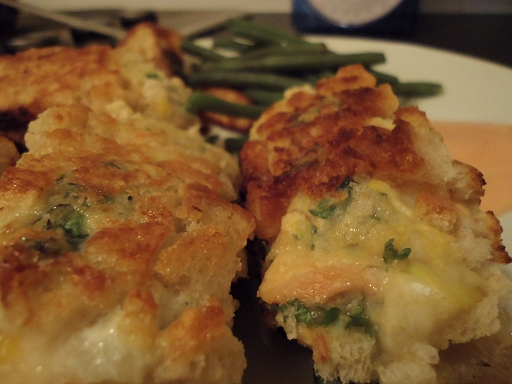 Adam Gray's salmon and smoked haddock fishcakes
These are a bit of an effort to make, especially if, like me, you don't have a food processor so you decide to chop up the breadcrumbs by hand. Tasty though; they're a little greasy but that's countered nicely with the tomato mayonnaise. But! Word of warning: they're really filling. If you make them as large as I did, don't eat four in one sitting otherwise you'll end up uncomfortably full all evening.

Not that much. I just had loads of pictures saved up since January. Remembering to blog about photos of food doesn’t get tougher than this! (As they say on MasterChef.)

You have been cooking a lot! You put me to shame!! YOCO!