Here we have the first food post from the kitchen in my new flat! It took me a while to get started with cooking. At the beginning I was far too busy with moving and unpacking and all that business. And then I realised that the fridge-freezer in the new flat wasn't working very well :( My landlord bought me a new fridge-freezer, but it took about a month for it to arrive. That's a month of tinned food only. Oh God. (I'm pretty sure I suffered through this whole ordeal only a couple of years ago too.) I was so ready to get down and do some proper cooking when I finally had the chance. 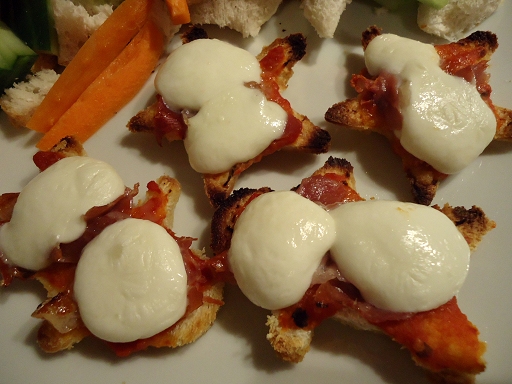 Star Pizzas
This is, admittedly, a recipe for kids, but there's no reason why I can't eat fun shaped toast pizzas too. Although, as an adult, I doubled the portion size, and also ate the leftover scraps of bread in a salad. All in all, it's a yummy recipe. There's a lot of good pizza flavour in those little bites, and they're really nice and crunchy. The cheese could probably have melted for longer, but as you can see, the corners of my bread started catching so I had to take them out. 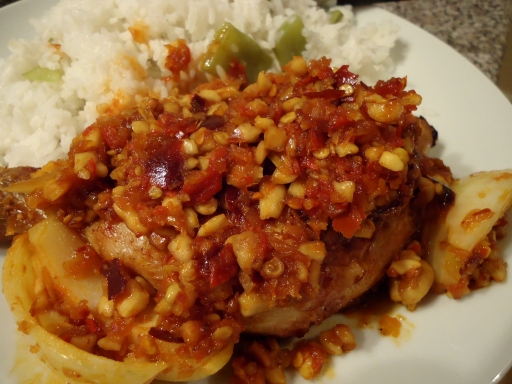 Satay chicken legs (recipe from "Chicken Leg" by Hoe Yee)
I need to admit up front that I don't like chicken satay. Or, rather, I like the chicken satay skewers but don't like the peanut sauce (I am not the world's biggest peanut fan). "But, you know," thought I, "I've never eaten proper Malaysian chicken satay. I bet I'll really like it if I eat proper Malaysian chicken satay." After making this recipe I can conclude that, no, I dislike the peanut sauce on chicken satay, no matter where the recipe comes from. The shock with this one though is that the peanuts weren't the worst part (they were manageable). Instead the worst part for me was a tie between the heat of the raw onion (I hate raw onion) and the 60g sugar. Now, either that amount of sugar is a typo or, as I suspect, Asian cuisine doesn't distinguish so much between sweet and savoury dishes as we do in the UK (and, you know, this distinction is really quite a recent trend in British cooking; putting sweet things in savoury dishes was the norm for centuries). Alas, 21st Century, British me finds it really hard to handle too much sweetness in my savoury dishes (I can't stand pineapple on pizza, for example). All this meant that no matter how much I tried to like this dish (and the first few mouthfuls, sans raw onions, were ok) the sweetness of if made me start to feel a little nauseous after a while. So then I pretty much ignored the sauce and ate the chicken on its own. Some notes on the cooking: I couldn't find fresh galangal so I used galangal paste; and I couldn't find tapioca flour so I substituted cornflour (which doesn't have a great consistency for marinades, I discovered). Also, this recipe called for the chicken legs to be deep-fried before being added to the sauce. I am far too scared of deep-frying to do that, so I pan-fried them to get the skin crispy then shoved them in the oven. Only, I think I put them in the oven for too long, because they turned out a little dry. Finally, this was the first time I've cooked with fresh turmeric. I don't think I was prepared for quite how yellow everything (everything!) would turn. A lot of my kitchen equipment now has "character". So, um, if you like chicken satay, maybe you should give this dish a go. As for me, I am never making this ever again. 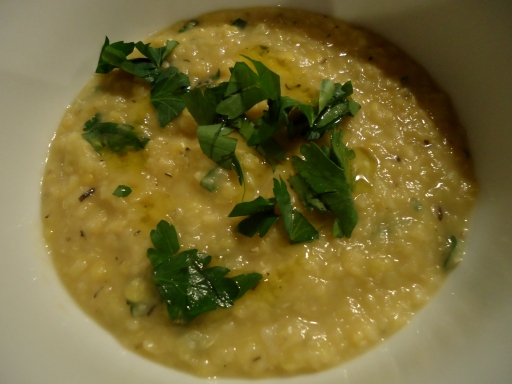 Italian lentils (recipe from "Nigellissima: Instant Italian Inspiration" by Nigella Lawson)
This recipe called for Castelluccio lentils, but I couldn't find those for love nor money, so I substituted with red lentils. I may also have added too much water, because what I ended up with was more of a dhal than the individual, glistening lentils in the picture that accompanies the recipe. The taste was a bit watery too, but still plenty edible. Overall this is probably a decent recipe that suffered from poor execution on my part. 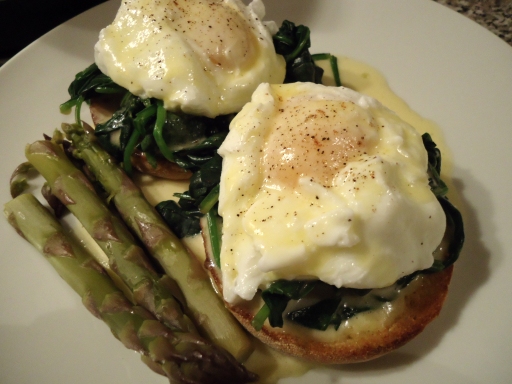 Eggs Florentine
Next up I said goodbye to the "put it in a pot and stir it" lentils and decided to try to cook with the big boys. I've never eaten eggs Florentine before, let alone tried to cook them. The same with a Hollandaise sauce. As I discovered, cooking them wasn't easy. There are a lot of components and each one needs attention while cooking, so trying to get everything ready at the same time is hard. In fact, so complex was it that I ran out of saucepans and had to melt my butter in a frying pan! As you can tell from the picture, I had difficulty thickening my Hollandaise (I think I needed to let the eggs cook out a little more) but at least it didn't split on me! Now, I think the reason I haven't eaten eggs Florentine before is that it doesn't sound very appetising to me. I don't eat eggs often, because I find them a little rich. Serving two eggs (I was eating this for dinner rather than breakfast, so doubled the portions) with a sauce made out of extra egg yolks and a tonne of butter sounded far far too rich for my tastes. But do you know what? I didn't realise how lemony Hollandaise sauce is! It went really well with the eggs and the spinach, and it soaked gorgeously into the muffins. This dish was a right pain to make, but the taste was worth it. 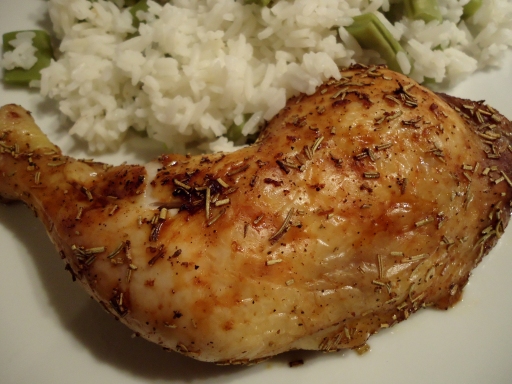 Roasted herb chicken leg (recipe from "Chicken Leg" by Hoe Yee)
You could rightly call this dish "fusion". Lemon and rosemary chicken sounds Italian to me, but I'm sure most Italians wouldn't add oyster sauce or soy sauce too. I didn't add the Shaoxing wine to this, but otherwise I made no changes. And do you know what? The taste turned out nice! Salty and umami and lemony and herby. My only issue is that the recipe says to bake the chicken legs for 25 minutes at 200°C, but this left my chicken pink in the middle (and the kind of annoying pink, where you only realise once you've eaten half of it). Another five minutes in the oven and these would have been perfect. 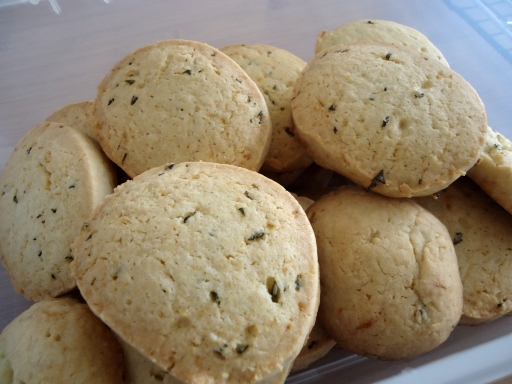 Fragrant rosemary cookies (recipe from a house-warming card sent to me by James and Eppa)
I've never received a recipe on a greetings card before! I was so intrigued that I had to give it a go. The main flavour in these cookies is rosemary and lemon (much like the chicken I'd just cooked). They were pretty easy to make; the recipe involved rolling the dough into a log, and then slicing it once chilled, which I've never done before, but which I think is much easier than using biscuit cutters. To eat, these cookies were nice: crunchy and crumbly with a subtle sweetness. I've never eaten rosemary in a dessert before. I worked well, but is a little confusing if you're not used to it; while these were baking my poor head was trying to understand why the whole room smelled of a lamb dinner. 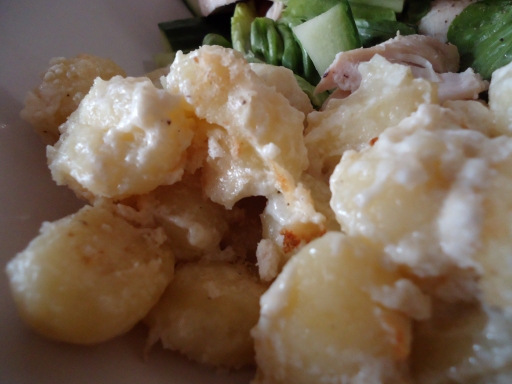 Gnocchi gratin (recipe from "Nigellissima: Instant Italian Inspiration" by Nigella Lawson)
This recipe doesn't photograph well. Instead of a smooth cheese sauce around the gnocchi, you end up with a sauce that, while smooth to eat, looks a little like scrambled eggs. I honestly don't know if the recipe's meant to do that or if I did something wrong. Either way, this recipe was ok, but not great. I get the feeling, from past recipes I've made, that Nigella likes this subtle, creamy, slightly nutmeggy taste. For me, though, I couldn't help longing for more cheese. A big old hunk of mature cheddar would have sorted this right out. 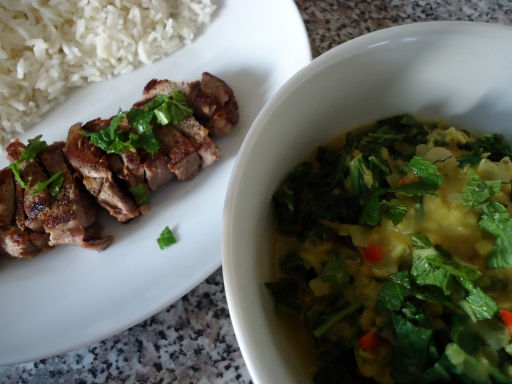 Pan-fried lamb with kale dhal
This recipe is technically meant to have griddled lamb, but I don't have a griddle pan so I just used a frying pan instead. I also used lamb leg steaks because I couldn't find lamb loin fillets. This meant that I may have overcooked my lamb a little (it could have been pink in one part, but only if you squinted) but I actually prefer my meat well-done so I was happy. The dhal was maybe slightly hotter than I normally like, but other than that the taste was really good; it went well with the lamb too. I get the feeling that this recipe is marketed as being a "healthy" carb-free option, but I ate mine with rice. I have no truck with carb-free diets. Humans literally need carbohydrates to live, so I will eat them with every meal thank you very much. If you're watching your weight, there's an extravagant greasy piece of lamb on this plate that you could lose easily, given that you already have protein in the lentils. Rant aside, this recipe was tasty and gets a thumbs-up from me.

I want some star pizzas, too! You can’t get old enough for pizza to become inappropriate.

Also! I hate peanuts in savory dishes!!! This isn’t a nice thing to say, probably, because it invalidates the dietary preferences of whole cultures — but I can find other things to love about those cultures, besides the fact that they put cookie ingredients in dinner dishes. Speaking of which, Google tells me that 60g of sugar = about 1/4 cup, which many Americans (hello, mom!) consider to be seasoning-level quantities of sugar, so. Maybe I should reconsider the peanuts after all.

My endocrinologist once told me to eat lentils because they have some kind of blood-sugar balancing phytonutrient in them, or something. I didn’t fall for it, but those lentils look really good.

Never had eggs florentine, or even really knew they were a thing. They look tasty, though!

Roasted herb chicken leg & rosemary cookies I can cosign for.

I have only ever had gnocchi in red sauce, so I am intrigued by the concept of them in cheese. It seems like maybe there would be a lot of chew there, but then I’ve never had them so I can’t comment.

Never eaten lamb, either! I grew up on a farm :[

I do agree that people need carbs; when I’ve done low-carb diets in the past they make me feel like I’m going to die. Apparently the brain needs glucose to live, who knew? In my opinion, neither the lamb nor the rice is likely to make a person fat (unless that person is eating 10 gallons of each). It’s the ice cream for dessert and then the bag of Cheetos that the hypothetical person eats while they watch Stranger Things that’s the real culprit. And sitting in a chair all day at work and then coming home and sitting in a chair. But I digress.

We are the exact opposite re peanuts. For years I thought the idea of peanuts in sweet food was disgusting. Happily I’ve now changed my mind, but I mostly don’t like too many peanuts in any format.

Lamb is my actual favourite, but I know lots of people who don’t eat it. I would eat it more often but it’s super expensive.

Whenever I’m feeling particularly ranty about carb-free diets, or other strange diets (Raw??? Keto?????) I go and read the Angry Chef blog until I’ve calmed down again.

Love the rant at the end. Made me chuckle!

Glad you enjoyed it! It’s only restraint that stops me from ranting about carbs every day!