Hi all. I've been quiet here recently because I just moved house! Oh God it takes up so much time. Oh God please never make me do it again.

Because, of course, there's not just the packing and the unpacking. There's also the buying new furniture (because the old place came part-furnished) and there's the putting together of the new furniture, and then there's the cleaning (so many years of grime to remove), and then THE PAPERWORK.

I'm being melodramatic. You've all moved house; you know what it's like. But having just finished everything, I am really looking forward to getting some free time again.

Speaking of free time, I moved so I could be closer to work. I have now shaved two hours off of my daily commute. Two hours! It's bliss. I'm currently filling my evenings with "Masterchef". The added bonus of moving is that while my rent is more expensive (let's not talk about it) I do this time get a separate bedroom. I don't have to sleep in the living room any more! What luxury is this???

Let's have a photo tour. 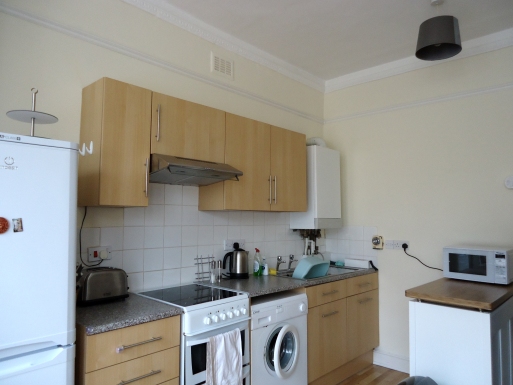 The kitchen part of my open-plan kitchen/living room. (Ok, so what I gained in a separate bedroom, I lost in a separate kitchen. Still, it makes watching TV while cooking very easy.) This kitchen is smaller than my old one, which made me sad. So I bought (and then put together) the kitchen island thing you see. I feel very proud of my DIY achievements. 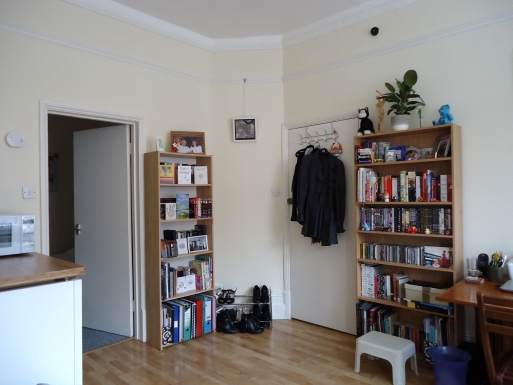 The other part of the kitchen/living room. (Not pictured: the sofa.) Moving into a blank space is kinda sad. As soon as I'd unpacked all my books, the place became instantly more homely. Also, I love that the room comes with a picture rail. It makes hanging pictures so easy! One of my pictures (which I just received) is an heirloom from my late grandparents. (It's not rare or expensive, mind, just sentimental.)

See also: the plant on the bookcase was a house-warming present from my boss. How nice of her! 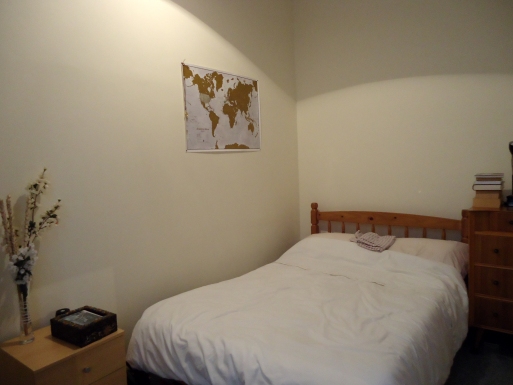 The bedroom. I had to turn on the lights, because it is grey and rainy today and this side of the house gets no light at the best of times (which is actually a boon for sleeping). The map on the wall was a present from colleagues. It's covered in the material you get on scratch-cards, so you can scratch off all the countries you've visited. (I've done well on Europe, and terrible everywhere else.) 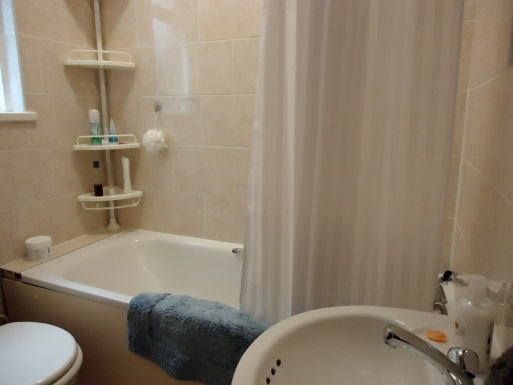 The bathroom is tiny, but the shower has a good heft to it. 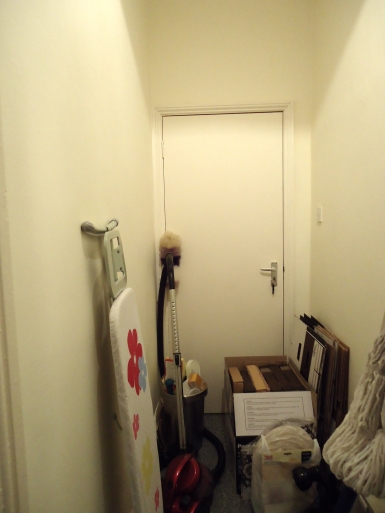 Finally we have my random corridor that leads to nowhere! This flat comes with zero (0) cupboards (why????), so I've decided to fill the corridor with all my ugly household stuff.

That's it for my new and glamorous lifestyle. I've been breaking the kitchen in with some cooking (including more turmeric than I ever thought possible; everything I own is now stained yellow) so you'll be getting a food post at some point.

Is this the cutest apartment ever? (Spoiler: Yes.)

I am immensely jealous of your picture rail. Once, when I was a small child who had watched a lot of Masterpiece Theatre, I got my parents to put up a picture rail in my bedroom using trim so that I could pretend I lived in a manor house. Haha, what a pretentious and delusional idiot (to be fair, I was like 8).

I also like the tile in your bathroom. Here in the US we are having a “subway tile” moment, which means everybody’s bathrooms look like everybody else’s bathrooms. “Small” is much better than “Camazotz.”

Really pretty place, though.
And you have drawers in your kitchen, too!

Also I am really loving this layout and the new commenting forms, wow.

What a joy it was to wake up to a glut of comments from you. Thank you! And thank you for being so nice about the new layout. I’d grown really tired of the old one (I never liked it much tbh) so I decided to use the new year to do something about it. Now if only I could fill it with some new content too!

I am so happy to have kitchen drawers, you have no idea.

Pretending to live in a manor house aged 8 is a lovely thing to do. I mostly pretended I lived on a boat. Or inside a dragon.