I've done some more cooking recently! Let's get on with it. 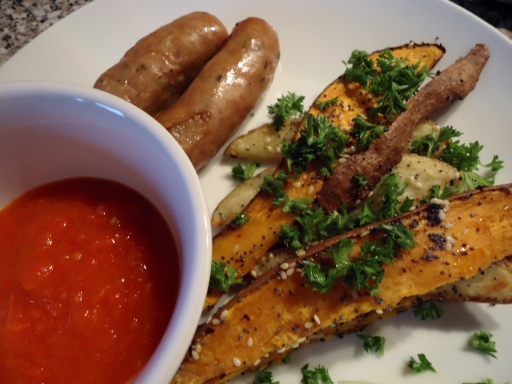 Chilli and poppy seeded potato chips with smoky red pepper dip
These looked rather impressive. (Ignore the fact that I couldn't find flat-leaf parsley and had to use the curly stuff instead.) The dip was smoky and tomato-y and red-pepper-y and worked well with the chips. The poppy seeds and sesame seeds were a strange choice, but they did add extra texture, I suppose. The only real issue I had with the dish was that the sweet potato chips were too sweet for my liking (I am not great with really sweet main courses). If I had swapped the sweet potato out for some more of the normal potatoes I would have enjoyed the dish a lot more. 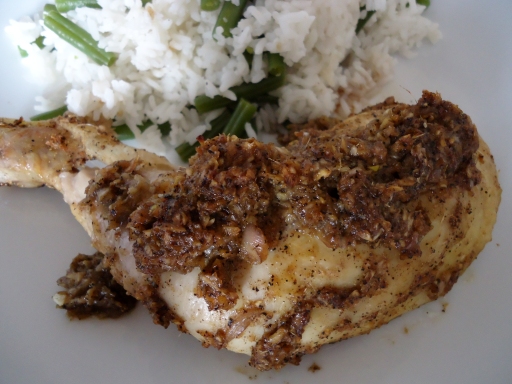 Baked black pepper chicken legs (recipe from "Chicken Leg" by Hoe Yee)
The sauce for this dish has a real punch to it. It's tangy from the ginger and the Worcestershire sauce and it's really hot from the black pepper. I've never put anywhere near that much black pepper in a dish before! It had a great taste but the heat was so much that I couldn't eat loads of the sauce. Unfortunately this dish was marred slightly by the fact that the chicken was still pink inside when I cut into it, so I had to microwave it to cook the rest. Annoying. The recipe says to bake the chicken leg for 25 minutes. A previous recipe in the same book called for the same thing and left me with undercooked chicken. Last time I said, "Another five minutes in the oven and these would have been perfect." So this time I duly left the chicken legs in the oven for five minutes longer. It was still not enough time. Such a shame, but the dish was great once fully cooked thanks to a blast in the microwave. 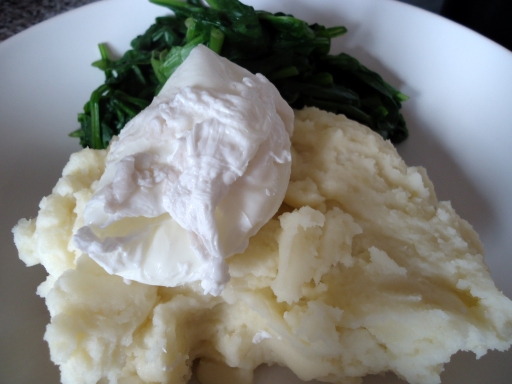 Mascarpone mash (recipe from "Nigellissima: Instant Italian Inspiration" by Nigella Lawson)
This picture is not doing itself any favours. White poached egg on top of white mashed potato on top of white plate. I know what you're thinking: "That mash looks rather dry and lumpy. I'm surprised that any Nigella mash recipe would be so dry and sad." I certainly thought it while making it. FUNNY STORY: turns out it's lumpy because I got my quantities wrong! I clearly wasn't paying attention when making this and accidentally used about 50% more potato than I was told to. Hence why the quantity of milk and mascarpone were too low to make the mash as creamy as it should be. I made one more change (this time on purpose) to this recipe. The ingredients list calls for truffle paste or truffle butter; I couldn't find those at all so I used truffle oil instead. Regardless of changes and accidental dryness, this dish was gorgeous to eat. The mascarpone adds a great richness and the flavour from the parmesan and the truffle is heavenly! Who knew that truffle and parmesan went so well together? I didn't! But I will certainly remember it for the future. Nigella recommended eating the mash with a poached egg, which was a really great addition: well done, Nigella. All in all, this was stunning. I made it again the next day with the correct milk:potato ratio and ❤ 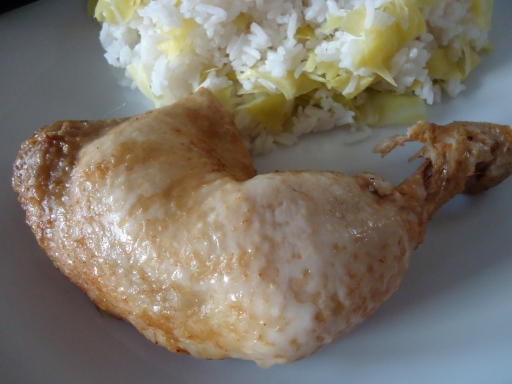 Stewed chicken leg (recipe from "Chicken Leg" by Hoe Yee)
The stewed or boiled chicken leg is a thing that you just don't see in British cuisine, so I know the picture doesn't look too appetising. Thankfully, I've made a similar stewed chicken recipe from the same recipe book so I knew that the end result was likely to be tasty. Unlike the previous stewed chicken leg dish, this one uses less salt and more sugar and has a different mixture or spices (primarily tonnes of star anise). I didn't add all the spices because I couldn't find them. I left out the gan cao (licorice root), replaced the cao guo (a type of black cardamom) with green cardamom, and replaced the dried cekur (a type of galangal known as sand ginger) with an unspecified galangal paste. I don't think the dish fared too badly from these substitutions because the smell while I was cooking was absolutely amazing, and the chicken was tasty too (it was mainly a slightly sweet, aniseed taste; but it wasn't too sweet for my palate). My only problem with this dish was that the chicken was pink when I cut into it. FOR GOD'S SAKE. After three pink chicken leg recipes in a row, I'm getting pretty tired of this undercooked chicken business. The recipe said to boil the chicken legs for 25 minutes, which clearly wasn't enough time. SIGH. I've learnt my lesson. From now on when cooking anything from this book I'm going to cook the chicken legs for 45 minutes at least. I have no idea why the author consistently thinks 25 minutes is long enough to cook such a large hunk of chicken. I have a few theories: 1) Chicken legs are generally smaller in Malaysia and Singapore, and so require less cooking? 2) People in Malaysia and Singapore prefer to eat their chicken slightly pink on the inside? 3) Methods of cooking in Malaysia and Singapore somehow use a more intense form of heat, so cooking times don't need to be so long? 4) The author has no idea what she's talking about when it comes to timings? I don't know which of these theories is true. All I know is that from now on I'm going to ignore any chicken-cooking timings given in this book. I'm tired of feeling :\ about a dish that should, in theory, be super-delicious. 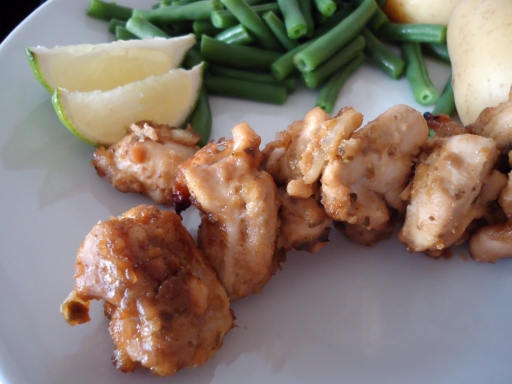 Satay chicken
Do you remember in my last food post when I said I don't like peanuts very much and so don't like chicken satay? I had tried to cook a Malaysian chicken satay recipe and discovered that I hated it. Well, thought I, maybe I'll finally like chicken satay if I try another recipe. So I tried this one; the bastardised, anglicised version. Turns out I like it more than the Malaysian version (my palate is so British; I'm so sorry). But, you know what, I still think chicken satay would be better if, in some crazy world, I could find a peanut-free version. This recipe calls for a barbecue, but I put it under the grill instead. The taste was nice! Slightly sweet (but not too sweet, like the Malaysian version), slightly spicy, with a hint of coconut and lots of lime. Oh, and peanuts (if you like that sort of thing). Certainly edible for me; maybe it's the lime (I LOVE LIME). Or maybe I was happy to eat chicken that's fully-cooked for once. In summary: not a complete success but definitely one of the nicer chicken satays I've had. Why do I keep eating chicken satays???

I love sweet potato fries! I’ve never heard of that recipe, though. They look delicious. Are those fingerling sweet potatoes? I’ve literally never seen those in a US supermaket.

Mascarpone mashed potatoes look like a thing I would eat too much of, but I will make an effort to find that recipe so I can fix it for holiday dinners. I usually just make sour cream mashed potatoes, which are nice — but I’ve had them every year for Christmas for a decade. Here I google.

Re: Chicken legs, do you know that sometimes they can be pink near the bone no matter how much you cook them? I once freaked out after making icebox chicken because all the bone-in pieces were pink in the middle, but apparently it was fine. Here’s a link:
https://www.thekitchn.com/chicken-still-pink-after-cooki-157168

I want you to know that it’s okay to give up on the chicken satays. No one will blame you. You tried hard; it just didn’t work out for the two of you.

I love lime, too!

Are those fingerling sweet potatoes?
I haven’t the slightest idea. I just went to the sweet potato section and picked some up. Only one type of sweet potato was available I think. (Tbh I rarely cook them and have no idea what I’m doing.)

Thank you for the link about pink chicken! I have definitely eaten cooked leg meat before that has a pinkish tinge. That said, the chicken I was eating above had definite red areas too, so I don’t think it was done. To counteract underdone chicken I have since moved onto INCINERATE IT TOTALLY OH GOD. But occasionally (just occasionally) I end up with chicken that isn’t pink but is moist and juicy and falling off the bone.

I hope you enjoy the mash if you make it! I am still a novice when it comes to truffle oil, but I am slowly beginning to discover that it can be really nice in the right circumstances.