Last weekend I went to visit James and Eppa who, as of last year, now live in Canterbury. I'd only ever been to Canterbury once before, as a child, and all I remember about it is the toy cat my parents bought for me when we there there. Understandably, I was eager to go again as an adult, now I actually have some idea of Canterbury's long history. (Unfortunately, I got no toy cats on this trip. But I did get to play with James and Eppa's cat, Dale, so it wasn't all bad.)

James and Eppa's new house is lovely, and their new garden is lovely too. We spent a lot of time sitting in it, and I was also fed some fresh garden produce: blackcurrant cordial, blackcurrant jam (on American pancakes), and a gooseberry crumble. Not from the garden, but still good, I was also fed a really tasty lamb and orzo dish, and then just before I hopped on the train home we stopped at Pork & Co for a mound of pulled pork. I have been spoiled.

When we weren't eating, lounging in the garden, or playing with James and Eppa's kids, Rene and Jack (and, by God, aren't they growing fast!) we went to do some sight-seeing. I think it's pretty impressive the amount we saw in two days. Here is the photo tour: 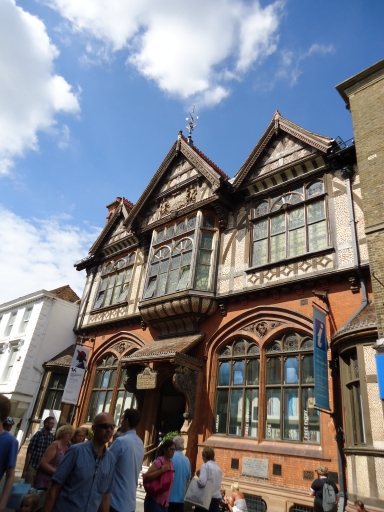 This is the Beaney library and museum. What an impressive frontage! It was built in the 1890s, but they were clearly going for an older style. Inside it's been refurbished and is very swish. They also have a lot of toys and fun things for children, which Rene had a great time showing to me. 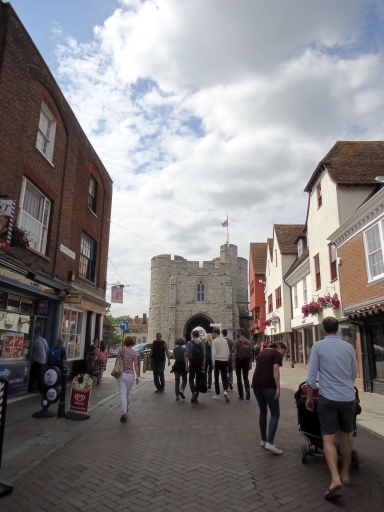 After passing the Beaney we walked to the Westgate, one of the surviving gates through the ancient city walls. At this point I kept boring James and Eppa by pointing out that Winchester (another historic city, which I visited last year) also has a surviving Westgate that contains a museum, just like this one.

I compared Winchester and Canterbury constantly throughout the trip. They have their differences, but they're both quite similar in the amount of history they can lay claim to; both places are fascinating.

In Canterbury, huge swathes of the city walls are still standing, which is rather cool. Also, unlike Winchester, the arch underneath the Westgate is still used as a road into the city. How cool is that? That road has only been in existence for over 1500 years. OMG. 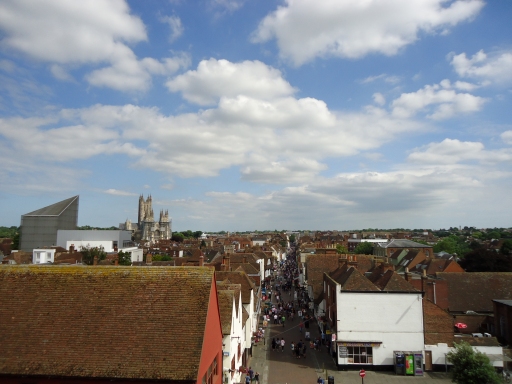 Here's the view from the top of Westgate, where you can see the line of the road in all its glory. Also, Canterbury Cathedral is there in the background. And, while Winchester cathedral is also of historical interest, can it boast an archbishop? Or such a popular pilgrimage destination? I don't think so. 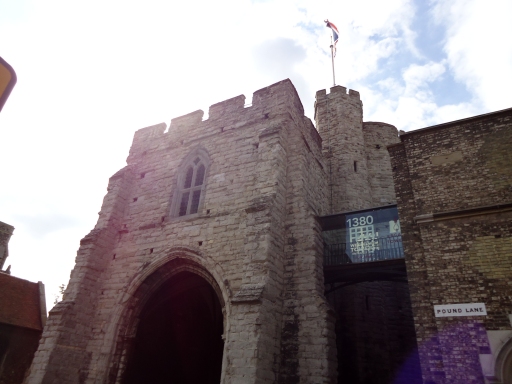 Here's the Westgate from the outside. 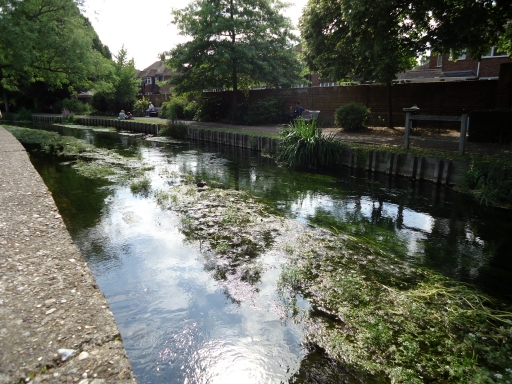 The Westgate is beside the river Stour, which is a small, dainty thing. We went to a park nearby and watched people on boats going up and down. 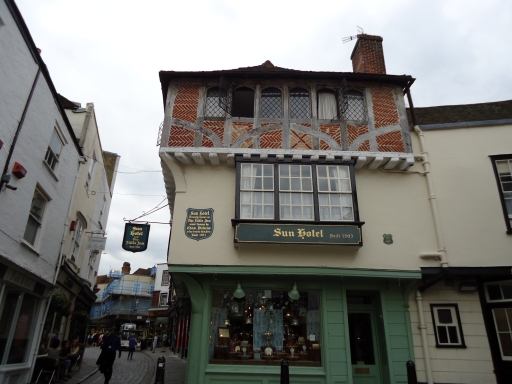 There are loads of old buildings in Canterbury. This one is an inn where Charles Dickens stayed, or something. 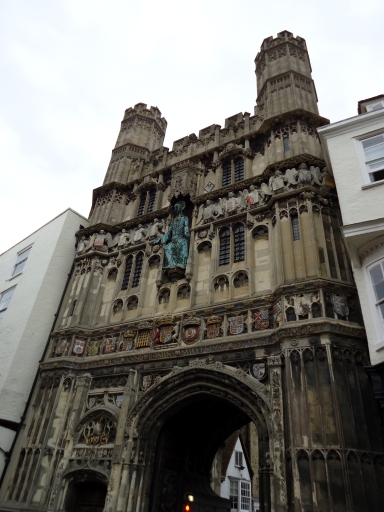 This is the gate to the cathedral in Buttermarket. It's known as Christ Church Gate and is hugely impressive. Look at all those carvings! Apparently it dates from the early-16th Century, although the statue of Christ was added in 1990 after the original was destroyed in a Puritan fervour. 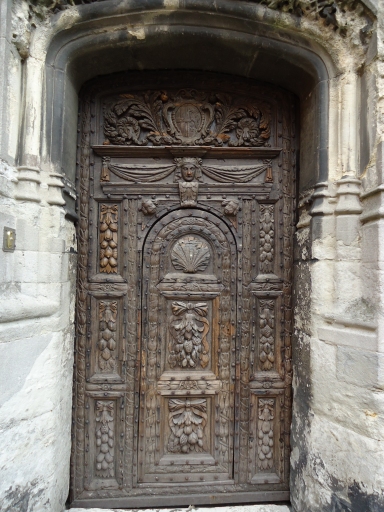 The pedestrian door in the gate is gorgeous. And I can't tell you how much I love little doorways inside big doorways! 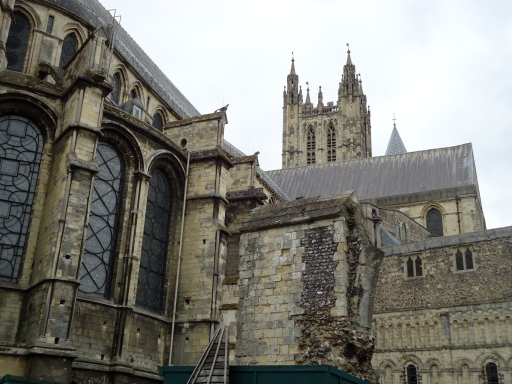 James and I didn't go inside the cathedral, because it sounded like there was a service going on, but we did walk around the outside. (This was almost the only part of the exterior that didn't have scaffolding on.) 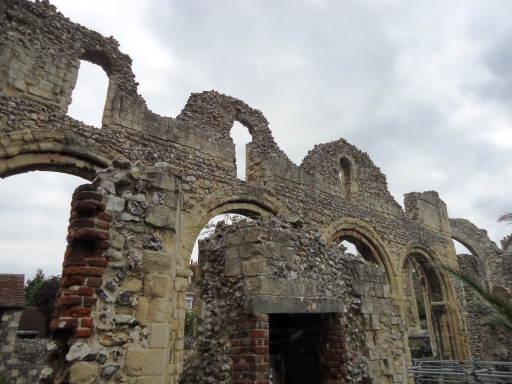 There were some huge ruins beside the cathedral, but we weren't sure what they were. One sign said they might have been an infirmary? Some part of the religious complex, anyway. I would love to learn more about the history of the cathedral. It's so old! 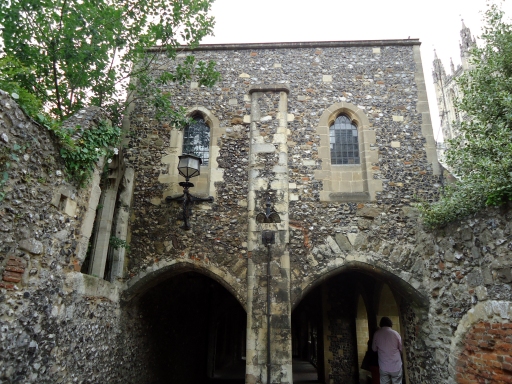 This entry to the cathedral is, I think, known as the Dark Entry. You can tell why! 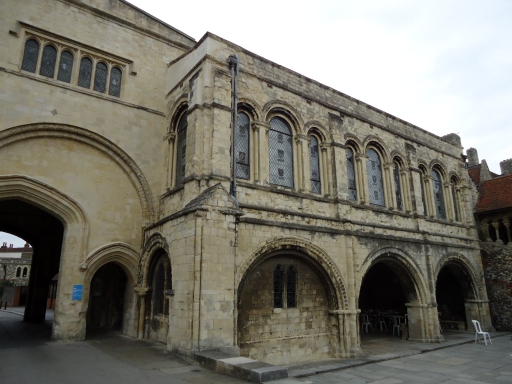 After walking out of the cloister through the Dark Entry, we found ourselves in the middle of some school fête and quite lost. There were still lots of pretty buildings in this part of the cathedral precincts though. 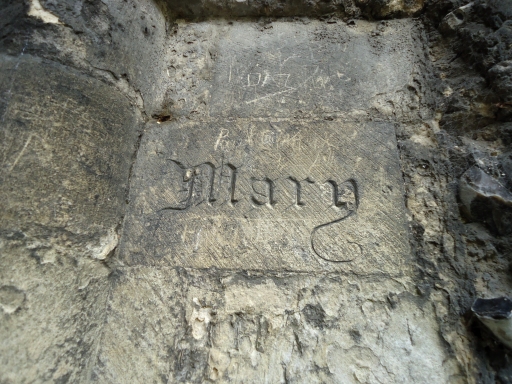 We quickly traced our way back to the cloister before anyone realised we weren't anything to do with the school. In the cloister I found this fab piece of graffiti. (I'm assuming it's religious graffiti rather than written by someone called Mary.) 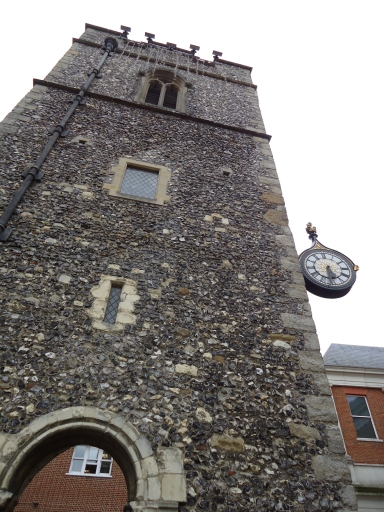 After the cathedral we wandered past this old church (or what's left of it) where Christopher Marlowe was christened. 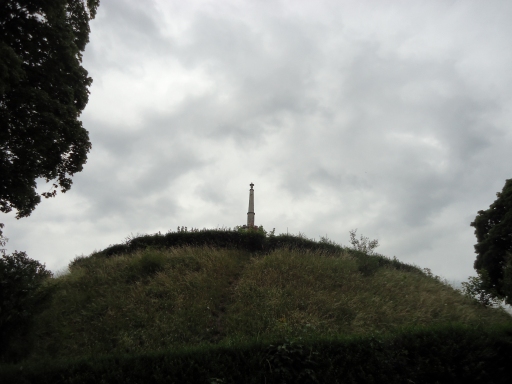 We found Eppa, Rene and Jack in the Dane John Gardens, where they have an awesome-looking maze for kids. Dane John Gardens is also the site of the earliest castle in Canterbury. Here's the mound it sat on.

And that's it for the photo tour. We also went to the Canterbury Heritage Museum (if you have children with you, make sure to head to the Rupert Bear section at the end) but I completely neglected to take photos while we were in there.

All in all, I had a great time. And because James and Eppa live there, I'll be able to go back some other time to soak up more history!

But most people would look at you a bit oddly if you considered eating, like, bacon and eggs with them.
I’m just backing away from this statement in shock and horror.

I remember pancakes day! Something about daffodils and crocuses? Violets? Buttercups?

Jesus has some torso-to-leg ratio issues, I’m sorry. (I’m sure he’s lovely in person.) I thought maybe someone had enshrined Paddington into the local architecture for a minute. Oh, well. I’ll always have the seashells and garlic ribbons on the Canterbury cathedral door?

Thank you very much for the articles link! They are both personally interesting and pertinent to my current avenue of nerd research.

Speaking of which: There are several places in the US that are much older than the rest of the country, and therefore weirder and more interesting. New York & New Orleans are probably two of the most well-known, and also the most venerable — what became NYC was already ancient when the Dutch eventually got around to gracing it with their presence. Their history is substantially different from the rest of the US (although it’s just as sad), and vaguely inflected with folk magic and a weird kind of local pride. Also, for the most part, these very old, semi-autonomous locations are the places the rest of the country fears & despises, much as it fears and despises the foreign world. (We will not speak of California, or we will get very upset.)

But it’s cake! Why would I want to eat bacon with cake???

I had not considered the age of New York. That’s very interesting. And you’re right; New York is not like the rest of the US. We foreigners tend to forget that, because New York features in so many films and TV shows (which is, of course, the way we absorb American culture). It’s easy to forget that there are large tracts of America we rarely hear about.

PANCAKES AREN’T ACTUALLY CAKE. CAKE HAS ICING, PANCAKES HAVE SYRUP & BUTTER, IT’S COMPLETELY DIFFERENT, CAN’T YOU SEE THAT. IT’S OBVIOUS TO EVERYONE ELSE.

Why would I want to eat bacon with cake???
Don’t say that too loud, someone over here will hear you and then we’ll have Pinterests full of bacon-cake recipes.

New York features in so many films and TV shows (which is, of course, the way we absorb American culture)
That’s the way most Americans absorb the entire planet, so don’t feel too bad, and also —

Better to think about the culinary subtleties of pancakes, to be honest.

Also, and unrelatedly, I absolutely love this layout. This is literally the nicest comment form I’ve ever used in my life. Very impressive, and also a great showcase for your gorgeous photos. Two thumbs up!

Thank you! I’m so much happier with this layout than the last one. It feels like it’s actually from this decade (and it doesn’t look terrible on phones; yay!) I can’t take any credit though. It’s one of the layouts that comes with the blog software, and I made no tweaks to it. All I did was replace the standard header image with one of my own.

“on American pancakes”
There are other kinds of pancakes?

If there is a thing better than garden-sourced fruit & etc. I don’t know what it is. All your friends sound so lovely!

“Also, unlike Winchester, the arch underneath the Westgate is still used as a road into the city. How cool is that? That road has only been in existence for over 1500 years. OMG.”
This is the most awesome thing, ever. Everything ancient in America was pillaged and destroyed by evil, racist conquerors from whom most of the country’s current citizens (including me) descend — so there’s always an element of guilt and grief complicating any appreciation of antiquity. I know that all the countries of the UK were just as fraught by warfare and strife as any other world location; but, it seems like there was also a great deal of historical continuity, so you have things like 1500-year-old roads and intact city walls. And I just think that’s jaw-droppingly amazing, please excuse me.

IF ONLY YOU HAD VISITED IN APRIL, WITH HIS SHOWERS SWEET

OKAY PLEASE EXCUSE ME I HAVE TO GO LIE DOWN

Ahaha. I share your enthusiasm! Canterbury is so pretty and old, it doesn’t quite feel real.

1. The river was pretty, but the park beside it was very crowded. I’m surprised I was able to take a photo without many people in it.
2. That’s a 1990s representation of Jesus, ahaha. Like all of us in the 1990s, he was going through a baggy trousers phase.
3. I have no idea what’s on that door. I don’t even know when it dates to.
4. The name Buttermarket is a quaint 19th Century addition. Before that it was known as the less quaint Bullstake.
5. “THE DARK ENTRY” XD WE’LL HAVE NONE OF THAT LANGUAGE HERE, THANK YOU
6. Apparently Dane John is a bastardised form of the word “donjon", which means a Norman castle or something.

You are right that we are lucky in the UK to have had a continuity of administration that has helped to preserve a lot of historical sites. Even when things haven’t been preserved on purpose though, I’m always really interested to see how some things still survive (road layouts, place names, etc.) To use a US example, I heard that Broadway in New York was originally a Native American trail, which is why it bears no resemblance to the grid system streets around it.

I really really need to learn more about the history of other cultures (my ignorance is astounding). History as a genre tends to be so European-centric, it’s easy miss out on lots of interesting stuff. And there’s plenty to be said about negatively-stereotyping cultures by denying them their heritage.

As an aside, I was reading this series of articles and they were really good: Race, Racism and the Middle Ages

Now onto the really charged issue here: pancakes. When British people say “pancakes” they mostly mean “crêpes". We tend to eat pancakes (read: crêpes) once per year on pancake day. They are eaten as dessert, traditionally with lemon and sugar. Slowly, however, we are beginning to eat more American-style pancakes, for breakfast, which we tend to call “American-style pancakes". But most people would look at you a bit oddly if you considered eating, like, bacon and eggs with them.