Hello. At some point I'll give you a post full of news and serious stuff.

But for now, have a quick post full of food instead :D

It started with cake baking during the Jubilee, and since then I've had fun playing a game I like to call 'cooking from actual recipes'. Normally, I have a few things that I cook on a regular basis and the rest of the stuff I kinda half-arse and make up depending on how I feel. Using recipes is fun because the food is all new and exciting and I am the type of person that actually finds following an orderly set of tasks to be quite thrilling. Rock and roll, guys. Rock and roll. 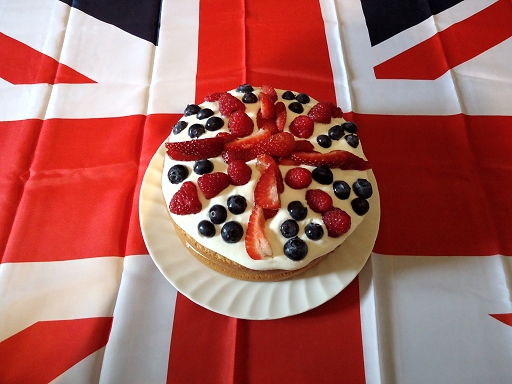 Summer Berry Sponge
I wanted to bake a Jubilee cake, but I find some cake recipes difficult to stomach because I'm not keen on buttercream. Luckily, I found this nice cake that had a filling and topping made from a mixture of cream cheese, natural yoghurt, maple syrup and vanilla instead. It came out tangy and sweet, and rather patriotic. 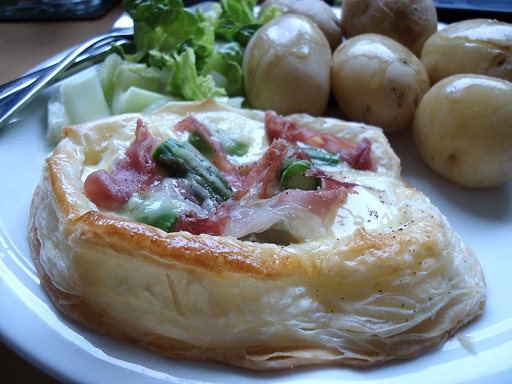 Asparagus and Camembert Tarts
Really really tasty, this recipe. I think I have a thing for camembert, because the melted camembert on this tart was to die for.

Salmon and Rice Salad
This was nice, but I found the salmon a little rich. I have a feeling I may have added too much olive oil to my dressing by mistake.

Whenever I’m branching out into culinary areas I’ve not tried before, it reminds me of how successfully you’ve become a cooking pro in Germany.

Also, I never check facebook and didn’t realise you put up pictures of food! I shall be checking more often from now on.

p.s. How did the samosas turn out? (I think experiment #2 could be more union jack-y tbh.)

I do like a good food photo, but some people have abused me for putting these onto FB. What do they know!!!