Happy New Year! I hope you're enjoying 2019. It's the time of year when we all pretend that it's nice to get back into the normal routine of things. I suppose that's partly true, but I could easily fit in an extra few days of stuffing my face in front of the TV if that was an option (it's not).

This year I went to see my parents for Christmas. We normally go visit other family on Christmas day or boxing day, but we didn't this year because most of them had gone off and rented a cottage in Devon. From the photos, it seems like Devon was good, but I've a feeling that there might have been some cabin fever and frayed tempers if my parents and I had gone along too (that would have brought the total up to 14 people and two dogs and that sounds fun but incredibly exhausting).

So my parents and I kept up to date with Devon via WhatsApp and in the meantime had our fill of eating and watching TV (Kingsman was a really enjoyable film, by the way) and doing some of the puzzles from my Nan's house. My Nan used to love puzzles, and there's something really pleasant about sitting with loved ones while listening to music and working on something like that all together.

I also went to visit one of my friends on boxing day who had an awful Christmas because her little daughter was hospitalised with pneumonia. Thankfully the daughter was released from hospital this time last week, so here's hoping that the rest of her recovery is speedy.

For New Year I went to stay with Deborah in her new place. We did awful karaoke using Spotify and whatever lyrics we could find on Google. Then we watched Top of the Pops on TV with the subtitles on and karaoke-d that as well. At midnight we went down to the Thames to see the fireworks on either side of the river (this is in East London, I should add, not the big ticketed fireworks down near Westminster), which was great but the wind on the river was freezing. We also ate lots of food; my goodness. And the next day Deborah sent me home with lots more food. I've been eating chocolate cake solidly for the past week.

I got some wonderful gifts and cards this Christmas, so lets do a rundown (because I love looking back on these posts later). 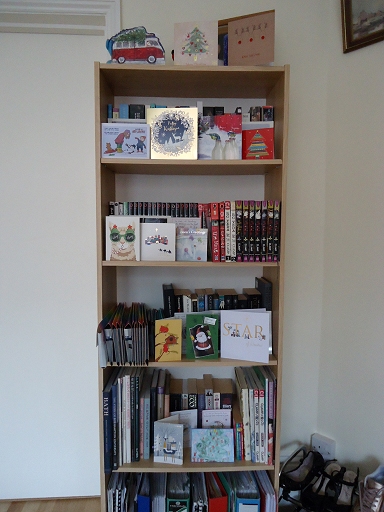 My cards this year, including one drawn by Rene at school, and two with additional drawings (of knobs BECAUSE YOU ARE ALL CHILDREN) by Steve and Nick. 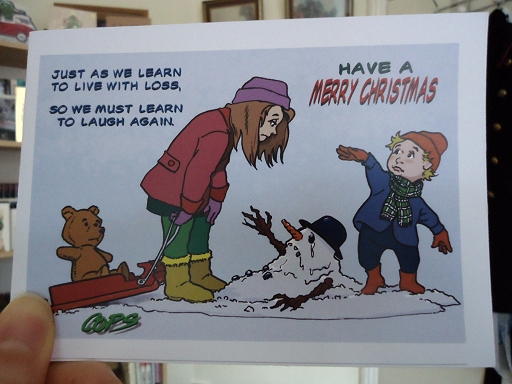 The most poignant card was this one, drawn by my Dad. He's still dealing with the loss of his Mum, and Christmas can be hard. 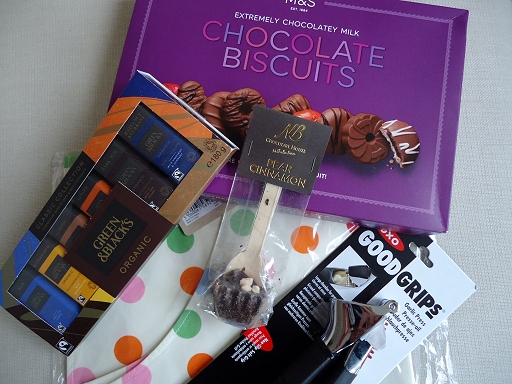 When it comes to presents we start with one from my late-Nan, which is that big box of chocolate biscuits there. As my Dad and Aunt were going through my Nan's stuff they found an M&S gift voucher that she'd never spent. There was enough money on the voucher to buy a box of biscuits for everyone in the family, so that's just what they did.

Other food-related presents include my very first garlic crusher (I am now an official adult) and a new apron (to replace my turmeric and pomegranate-stained old one). There's also even more chocolate (Green and Blacks this time) and Mariya got me that hot chocolate spoon when she went on a trip to Luxembourg. I drank the hot chocolate just a few minutes ago and it is A+. Rich and creamy with a great pear cinnamon flavour. Wow. 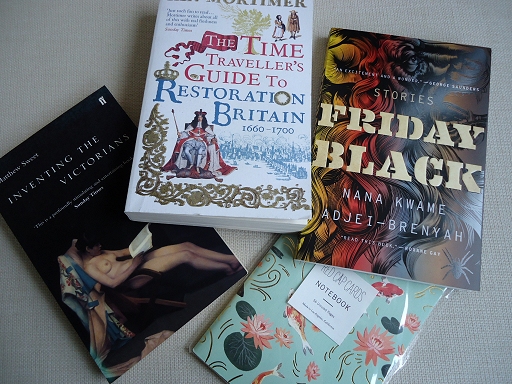 Books, including a notebook and "Friday Black" from Mariya, which I'm interested to check out. The other two books are from my parents, including sexy Victorians and the latest work from Ian Mortimer. I love Mortimer's "Time Traveller's Guides" series. They are so interesting. He writes in a really descriptive way, which you normally only find in fiction; it really helps bring the time-period to life. 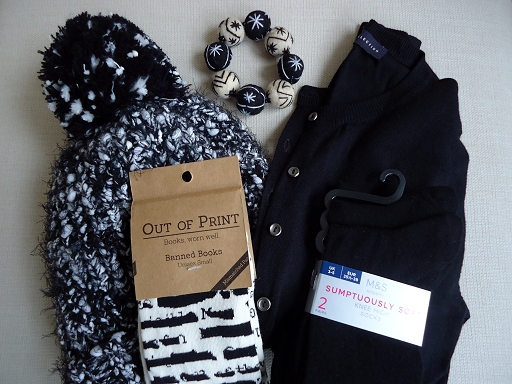 Clothing and accessories, including a smart new cardigan and bobble hat from my parents. The hat has been so nice to wear this week while it's been cold. The banned books socks and the bracelet come from Mariya. The bracelet is from her recent trip to Morocco. How cool is that? I'm wearing it right now in an attempt to bring a bit of Moroccan glamour to this dull January day. 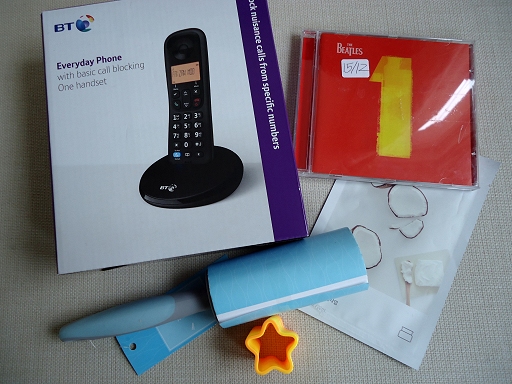 Finally, some other bits and pieces including a Korean face mask (from Mariya), a lint roller and an absolutely useless star-shaped slinky that came out of my Christmas cracker. The CD from my parents is the best hits of the Beatles. I didn't own any music from the Beatles, so this has been fun to listen to; my goodness, they created so many hit songs!

And I'm proving my age because I asked my parents for a new house phone (my old one was getting suspiciously warm at the plug). I have mentioned this present to a few people who have looked at me like I'm mad for wanting a house phone. Admittedly, I don't use my house phone much, but I grew up in an age where a house phone was a thing you absolutely had to have (because there weren't any other types of phone out there). In my mind, a home without a house phone is a home lacking something necessary. Besides, I'm paying for a landline connection, which of course does phone as well as broadband, so I may as well connect up the phone part. Don't look at me like that. At least I don't have a fax machine.

Actual comment:
Year-before-last’s Christmas looked lovely. Your friends and family all seem so charming and sweet! Your dad’s such a talented artist! I love chocolate biscuits, Korean skincare, sexy Victorians, and Ian Mortimer! I’m very sorry about your grandmother, of course. She seemed like a kind, excellent person. Always terrible to lose loved ones near the holidays, too.

Also: I too understand the pressing need for a landline! In my part of the US, emergency services are still tied up to landline connections so I don’t have much of a choice about keeping mine (I’m sure, in a futuristic setting like London, that’s not the case for you) – but I still like to keep one. If I had a $1000 cellphone I might not care, but I don’t, so I do. Hmm. That seems like it ought to make more sense, syntactically.

I’m impressed at how strong you are in the face of your computer issues! A few months ago there was a week where my computer refused to boot up and I felt like the world was ending.

My Dad draws a Christmas card every year. It’s a great thing to receive.

I wouldn’t go so far to call my family charming and sweet . My extended family is large and a lot of them are loud, argumentative and alcoholic. You gotta love ‘em though. The drunken antics crack me up. This year my aunt bid us farewell in the evening by shouting after us down the street. (In a friendly way.)