I'm really enjoying cooking right now. There's something about the cold weather (or the upcoming festivities) that just makes me want to load up on food. Nomnomnomnom. 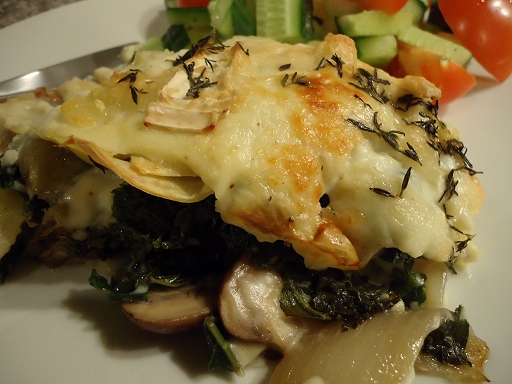 Kale, mushroom and goat's cheese lasagne
I had mixed feelings going into this one. You see, I love lasagne. I really love lasagne. But it's traditional lasagne that I love: it is a thing of beauty. Why mess with it? And I'm pretty sure that kale, mushroom and goat's cheese counts as messing with it. Oh well; I soldiered on with the cooking (lasagne is always such an effort) and hoped it wouldn't be too much of a disappointment. When it came to it, however, the final result wasn't a disappointment at all! I had worried that the lack of a tomato-based sauce would leave the dish too rich and creamy, with nothing to counter it. Thankfully the nuggets of goat's cheese on top provided just the tanginess I was looking for. I mean, it still wasn't a traditional lasagne, but it was definitely enjoyable. One note: my pasta was still rather tough and chewy though. I'm not a lasagne expert, but I'm wondering if the lack of a tomato sauce meant there just wasn't as much liquid for the pasta to soak up and cook properly. Hmmm. 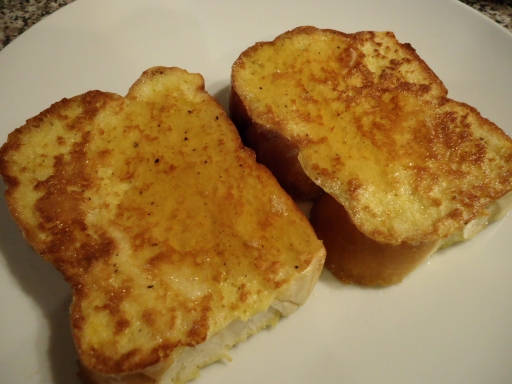 Sharon's cholla French toast (recipe from "The London Cookbook" by Jenny Linford)
I must admit, I had no idea what cholla was (or challa, as the loaf I bought was called). But then, I am not very familiar with Jewish cuisine. It turns out that cholla (or challa, or challah) is an enriched Jewish bread that's used for ceremonial occasions. Because it's enriched, it's a bit like a brioche, but I found that mine was less sweet. But, well, the unusual part of this recipe wasn't the cholla, the unusual part was that the egg was seasoned with salt and pepper before the bread was dipped in it. What? Salt and pepper in a sweet dish? Although, to be honest, the only sweet thing about the dish was the maple syrup drizzled on top at the end. I found the combination weird. It was less French toast, and more just eggy bread with syrup on top. In taste, it was like someone had just put maple syrup on top of a perfectly serviceable omelette. If, unlike me, you have absolutely no hang-ups with mixing sweet and savoury, then you'll probably like it. If not, maybe leave out the seasoning and add a bit more sugar instead. 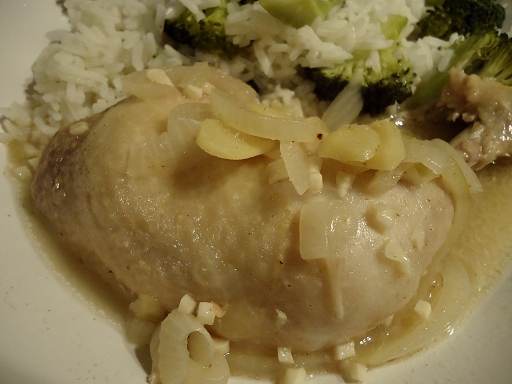 Thailand Patong chicken legs (recipe from "Chicken Leg" by Hoe Yee)
This dish does not look appetising at all (the picture in the recipe book didn't look appetising either). Boiled beige chicken with an addition of beige flavourings. But what all this beigeness hides is an absolutely wonderful flavour! This was yummy yummy yummy. One of the things that made this so tasty was the addition of tamarind paste. I've never cooked with tamarind before, but it's the reason why real curries always taste so great. It's also a very familiar flavour, because it's a key ingredient in brown sauce and Worcestershire sauce; it's sweet and tangy, just like the both of them. Add the tamarind to cumin and you get a match made in heaven. This dish smelled great when it was cooking and tasted just the way it smelled. In addition to the tamarind, you have just enough sugar to make the dish sing (not too much, as per the recipe above. If this cookbook has taught me anything, it's that the right amount of sugar can really improve the taste of a dish) and then you have the coconut milk, which mixes with the fat from the chicken to add a luxurious richness to the sauce. Ugh, this was good. (I should add that as always I cooked my chicken for 50 minutes rather than the 20-25 stated in the recipe, because I like my chicken cooked thanks.) 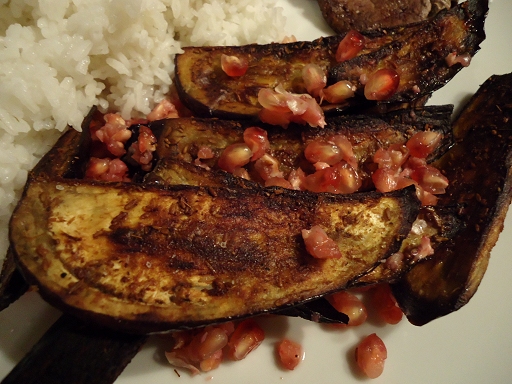 Aubergine and pomegranate (recipe from "The Groundnut Cookbook" by Duval Timothy, Jacob Fodio Todd and Folayemi Brown)
Can you tell that I mangled the pomegranate? I think you can tell. The thing is, I hadn't cooked with pomegranate for 14 years. All I could remember from the first time was that it was difficult. Great. So before I got started I Googled how to remove pomegranate seeds. Alas, the method I found (bashing an upside-down pomegranate half with a wooden spoon) just refused to work for me. So then I decided to just gouge the seeds out with a metal spoon, which left me with a lot of mangled seeds and an apron with permanent pink spatter-marks. As a wiser person, when I came to the second half of the pomegranate I decided that the bash with wooden spoon trick was definitely the better way to go. Alas, it still didn't work, and also ended up with the pomegranate slipping out of my hands and landing on the floor (oh, that got plenty of seeds out, let me tell you). So then I picked up the pomegranate, rinsed it, and furiously pulled it apart to remove the seeds with my bare fingers. Surprisingly, this last method worked the best, but in hindsight I can't tell if my success was due to technique or just the wave of fury that I was riding. Perhaps I shall never know. The rest of the recipe is less exciting: grind up spices, including a shed-load of cumin, and rub on aubergine with olive oil before baking. I think I fell down on the baking part. The recipe said to bake for 33 minutes, but my aubergine was definitely burnt by that point. When I made it a second time and took it out of the oven earlier, it was less burnt and much more appetising, but still not my favourite thing to eat. The large amount of olive oil made the aubergine really greasy, which is never my favourite thing. Also, I struggled again with the amount of sweetness in a savoury dish (I sense a theme). No. Why do I have fruit on my vegetable dish? Why? 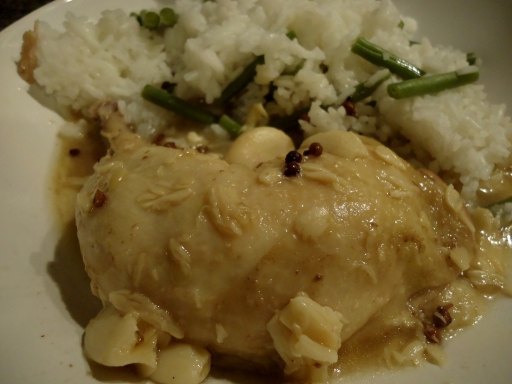 Simmered chicken legs with spices (recipe from "Chicken Leg" by Hoe Yee)
This recipe is meant to be called "Simmered chicken legs with beer and spices", but I left the beer out. (The recipe called for white beer. What even is that? Does it mean lager? There's a can of Carlsberg in the picture.) Without the beer, I thought the dish was going to be really boring. Thankfully, I was very wrong. The mixture of star anise, cinnamon, Szechuan pepper, garlic (that's broken-down garlic you can see in the picture) and soy sauce is perfect. It's a great flavour combination. And, like the last chicken leg recipe, the chicken is boiled in the sauce, which leaves the sauce rich and tasty. Two things though: The recipe said to cook the chicken for 20-25 minutes, and I went for 50 minutes as is my usual. Also, the recipe seemed to think that after cooking the chicken with a lid on for 20-25 minutes the sauce would be thick. How does that work? Is it something to do with the beer? Because even after my 50 minutes were up, my sauce was still runny. I then took off the lid and reduced the sauce down about an inch and it still refused to thicken. Hum. Did the recipe mean a drop-lid perhaps? I will never know, but I do know that this dish was delicious, regardless of sauce consistency.