I am still hobbling around in trainers. But at least I am now hobbling faster. Success! I think the pain is going too. I can walk well enough that I've now said 'screw you' to the bus and have started walking to the tube station again. Ah, it's so nice to be able to walk during my morning commute, even if it does hurt. Having to take twice the amount of public transport in the morning was giving me twice the amount of public transport-related rage.

Also, the swelling is going down. There's now a hint that I've got some ankle bones in there somewhere! Good. Let's just ignore the odd bruising for now though; I'm sure it's fine.

So, the tiger apparently got tired of living in the kitchen. I came home one evening to find it staring at me from a darkened room: 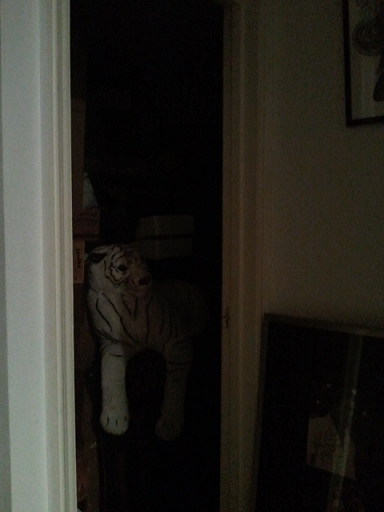 I HAVE NO IDEA WHAT ITS GAME IS. But, at least, in there it's less scary in a shocking way; now it's just scary in an insidiously creepy way. Good job, tiger.

Normally this room, which is my flatmate's spare room, is kept in the dark, but I got home a few days ago to find that the lights were on.

This is a list I've compiled. It's a list of songs I have actually heard on the street because someone thought it would be fun to play them super loud on their car stereos.

Doctor P - Tetris Dubstep
I heard this one on the way home from work this evening. I had no idea that a dubstep version of the Tetris theme was an actual thing until tonight. In fact, when it started, I didn't realise it was dubstep, there was just this really loud tetris music playing. It was kind of cool for a moment. Then the baseline suddenly kicked in and, Jesus, it was so ridiculous that I was left giggling to myself on the pavement. I actually can't listen to this song without laughing; I think I might actually enjoy it.

Orbital - Doctor Who
This one was a couple of months ago. Just imagine the scene: It's 8:45am on a cold morning. At the side of the road is a nondescript white van. And coming from the van is this song so loud that you can hear it halfway down the road. I laughed at this one too. I just loved the fact that somewhere inside that van, there were a couple of white van men who thought that before nine in the morning was the perfect time to rock out hardcore to a dance remix of the Doctor Who theme tune. I don't even know any more.

Jimi Hendrix - Voodoo Child
Ok. I actually heard this one about four years ago, but it was so epic that I still remember it. I was walking down the road, minding my own business, when suddenly this intro started playing. It was so loud that I didn't even realise where it was coming from; the sound just seemed to be everywhere. For a good few moments, I actually thought that I was having a bit of a turn, and that my life now had a soundtrack, and that that soundtrack was awesome. It was only later that I realised it was coming from a van that was sitting at the traffic lights. But those few moments of ignorance were the best few moments of my life, guys. I'll never be as cool as that again.

Man, I've been reading some random blogs of people who are funny, including one person who's hilarious and only 17. I am so so jealous of all their talents. Seriously.

So, I have decided that my internet persona needs to be more amusing. Unfortunately, I don't have the energy to actually think up jokes and stuff, so what I'll do is just end my sentences with the following emoticon: XD
This will be your cue to pretend that I've just said something funny and laugh about it. Ok? Ok XD