The Moon's a Balloon - David Niven
I finished reading this book a while ago and I have been meaning to write about it ever since. What it is is David Niven's autobiography. Now, I'm not normally a fan of autobiographies but my parents said I should give it a go because it was good. Having read it, I can confirm that this book is indeed good. And by good I mean hilarious.

Don't know who David Niven is? Doesn't matter. Read it anyway! If you're interested: he was an actor back in the day who very obviously had a talent for humour because I'm not sure I've laughed that much at a book in a long time. The beginning, where he talks about growing up between two world wars, is particularly funny. Once he gets to Hollywood it turns into a bit of a name-dropping game and I found it harder to keep up, but it was still great.

The Hunger Games trilogy - Suzanne Collins
Thanks to Mariya for lending me these books! I didn't even realise there was a film coming out, so that's good timing.

My review of the first book is this: It's certainly not the best written book out there. Parts of it rub me the wrong way for reasons I don't quite understand. But! This book catches your attention! The whole thing feels quite cinematic and the plot really pulls you along. It was one of those books that I found hard to put down because I really wanted to know what happened next, but at the same time I felt quite guilty about feeling that way. In fact, I would describe this as being a very similar feeling to the one I had when reading The Da Vinci Code.

My review of the second two books is this: These books don't have anyway near the gripping plot of the first book. It's hard to read the first book as a standalone because it's clear that there's more story to tell, but it is also hard to read the second two books afterwards because they're not very good. Now, to be fair to the books, it was only when I was a good way through the third book that I came across them in a bookshop and realised that they are young adult books. Then I felt silly, because of course they're not going to be as complex and engaging as other books. But let me criticise them anyway, just for fun :D The worldbuilding leaves a lot to be desired, the plot contains no subtlety whatsoever and the writing, while not actively bad, is no delight to read either. Not to mention the fact that I failed to become emotionally invested in any of the characters and found the main character actively unlikeable (although I think that was what the author was going for). That said, the books did redeem themselves with the ending when they proved themselves to be a bit more complex than I'd originally given them credit for.

In conclusion: The author does action well, which makes the first book quite a page turner. The rest is meh. Maybe it'd be best to skip the books and just watch the film.

Noel Fielding's Luxury Comedy
I was planning on writing a review for this while the show was still airing, but it turns out that I had to watch and absorb the whole series before I felt ready to pass judgement.

To be honest, I still don't know what to make of it.

I think Noel Fielding is a funny man with a superb and mad imagination, but this show is no Mighty Boosh. It was all amusing, yes. And it was all interesting; my attention was rapt for the whole half hour each time. But it wasn't all funny.

There were bits that were funny, like anything with Secret Peter (sorry for the poor quality of these clips, they're all YouTube has got), Tony Reason or Fantasy Man.

There were bits that were amusingly surreal, like Daddy Push or Jeremy Beautiful Chest.

Conclusion 1:
Not as funny as The Mighty Boosh but captivatingly surreal all the same. By the last episode, I was almost beginning to get it.

Conclusion 2:
I've taken a liking to some of the music:
Tutting Mountains
Mash Potato Life Shapes

Conclusion 3:
Anyone else think that Bryan Ferry's kite for a head (pictured here with Tony Reason) looks a bit like Sherlock Holmes? 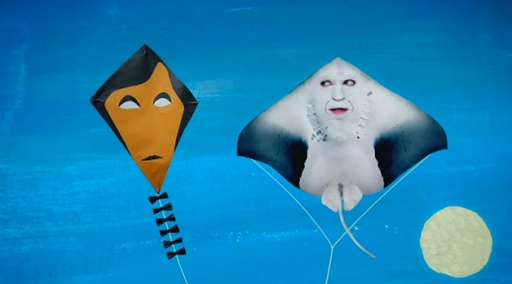 MasterChef
This is less of a review and more of a guilty admission. I got very caught up in this year's series of MasterChef. And I mean caught up to the point where I was dreaming about it on an almost nightly basis. Oh dear. Oh dear. It is a fun show though, because it is completely over the top. I am highly amused by the intense, dance music-fuelled cooking sequences, and by Gregg Wallace. Sadly, I don't have any clips of him from this series, but here's an older clip of him getting excited about some balls.

Also, if you haven't ever heard the buttery biscuit base song where have you been?

The Twelves
The other week I excitedly remembered that The Twelves existed and went on a romp to go listen to some of their remixes that I hadn't heard before. Happily, I found that they're just as good as I remember them. Oh, sparkly electro disco. The Twelves, this is why I love you:
Something Good Can Work - Two Door Cinema Club (The Twelves Remix)
Sound Of Love - Husky Rescue (The Twelves Remix)