Hi! I recently got back from a holiday to the Costa Brava in Spain. James and Eppa and Rene rented a house in Llafranc and invited folks to go stay with them, which was a very generous thing to do. Thanks, guys! Myself, Nick, and Eppa's brother Oscar took them up on their offer.

I haven't been on a proper holiday for two years, so this was lots of fun. And the weather in Spain was so beautiful! It was hot and muggy for the first couple of days (which I felt too English for) but by the end of the week the humidity and the temperature had dropped to something more reasonable. Rain was forecast for our stay, but honestly, if our experience was anything to go by, it seems like a rainy day in Spain involved a ten minute rain shower followed by a whole day of beautiful sunshine. When I got back to London after a week, I discovered that it is now autumn in the UK, which was a bit of a shock to the system, let me tell you.

So, what did we do in Spain? Well, there was sight-seeing and walks and beaching, as you might expect, as well as attempting to make ourselves understood in restaurants with our mangled Spanish. But it was very chilled too. There were chocolate croissants for breakfast, and lunches of bread, ham and cheese on the terrace. There was reading books to Rene and, apparently, teaching her to say the word orangutan. And in the evenings, because we often wanted to eat earlier than Spanish people do, we'd retire to our house to barbecue burgers and sausages or fresh fish from the market, and stay up chatting while the mosquitoes bit at our ankles. It was good stuff! (Except for the mosquitoes.)

I've got a million photos to share with you. Firstly, this is the view from one of our balconies (the house we stayed in had three!) Our house was up a super steep hill. (Walking up that each day was less fun.) 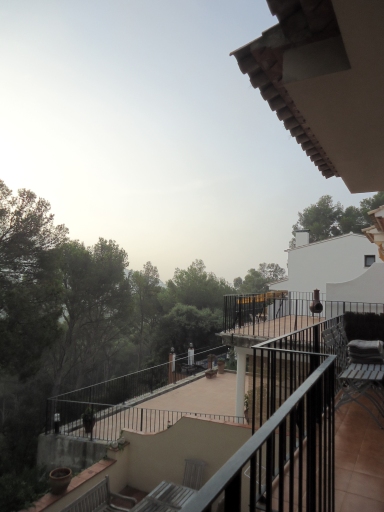 Here's the bay at Llafranc, where we were staying. Loads of boats! 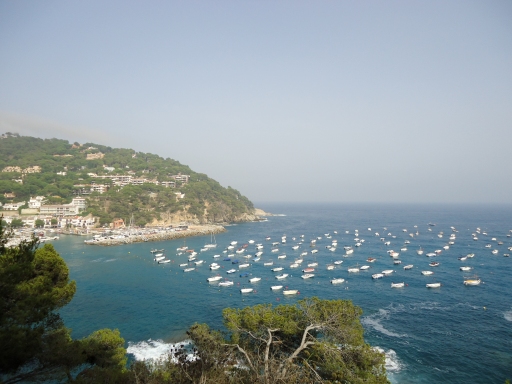 And this is the beach next door at Calella de Palafrugell. 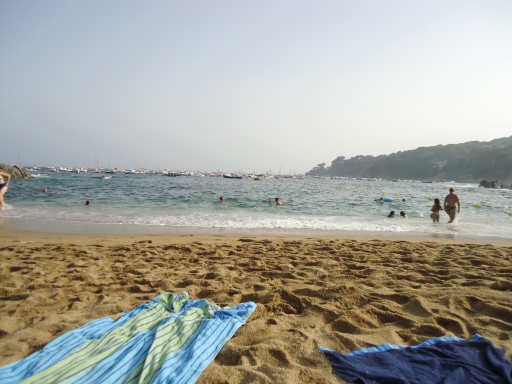 On one of the days we went on a trip to Girona. It's a really pretty city, with steep, winding streets, and buildings in the distinctive red, orange and yellow colours of the area. 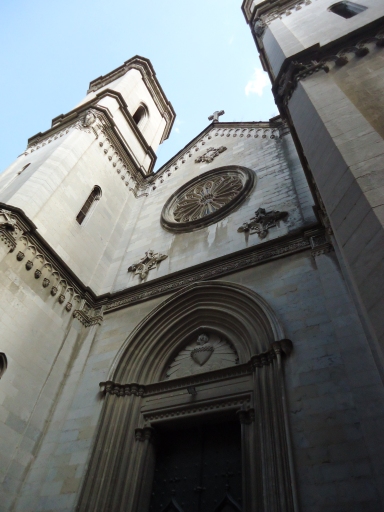 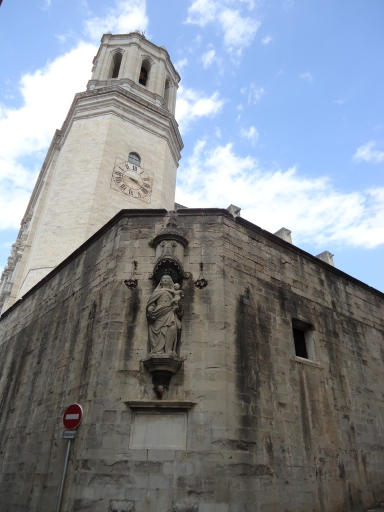 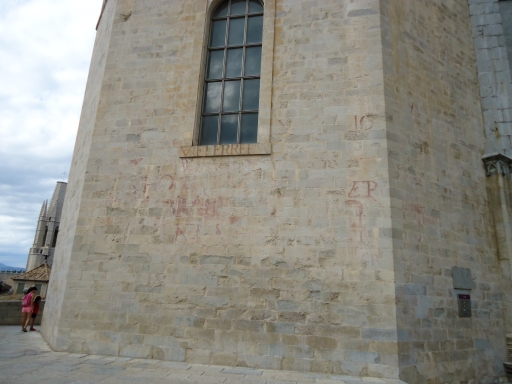 The cathedral in Girona had writing on one of its walls. What does it say? I don't know! 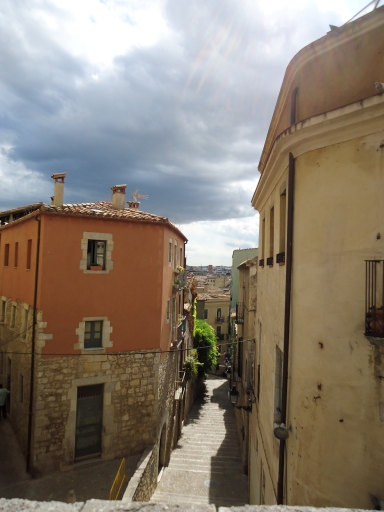 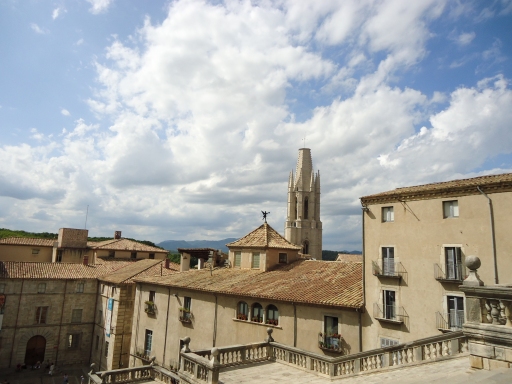 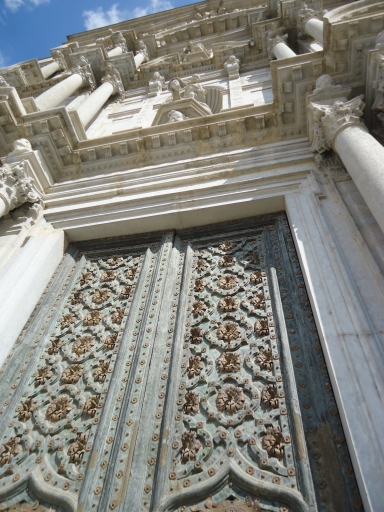 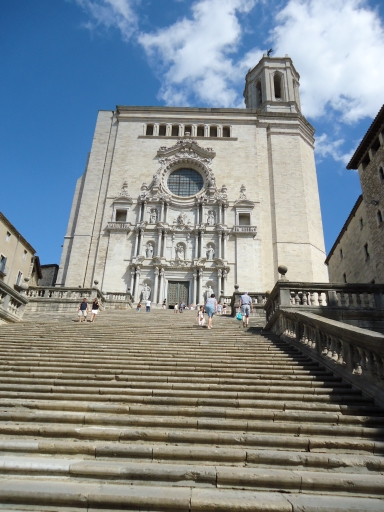 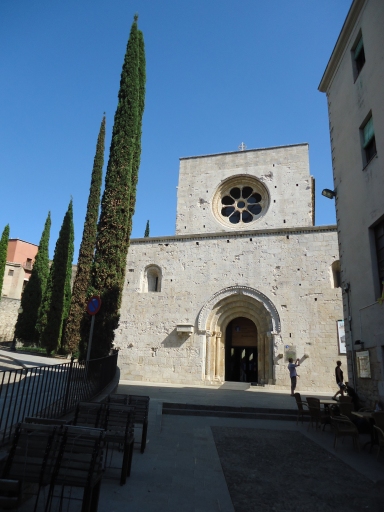 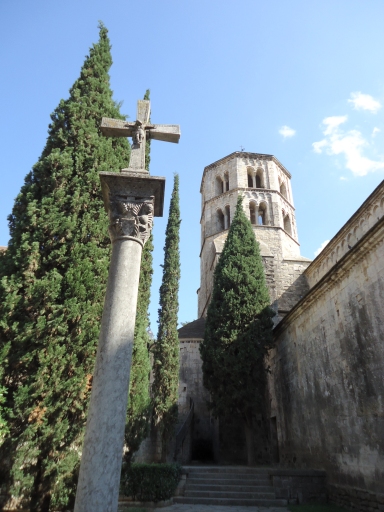 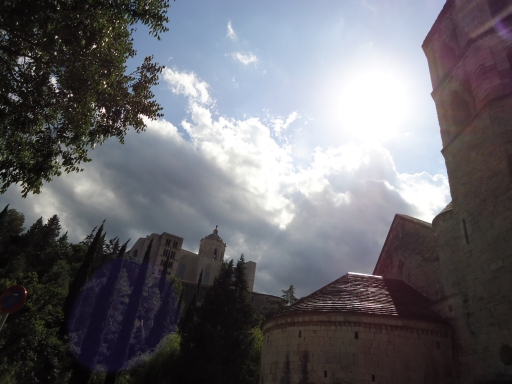 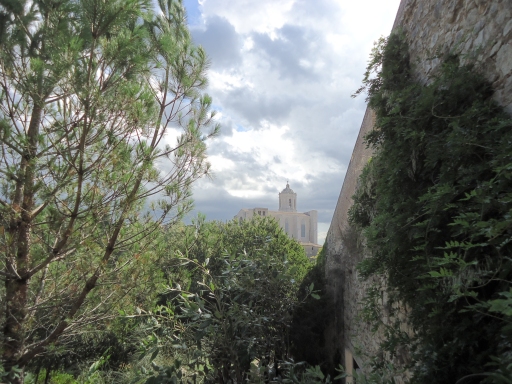 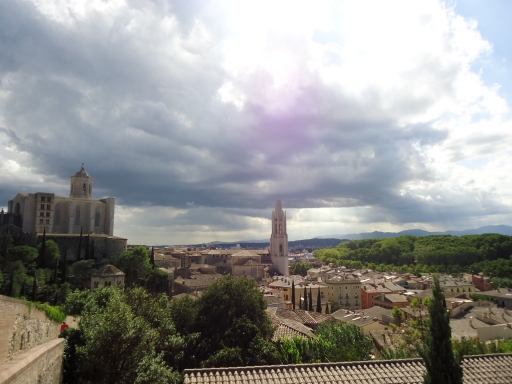 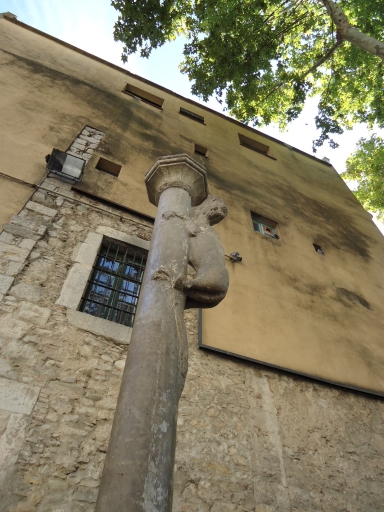 This pole with a lion on it was something to do with an old building that had once stood on the site. I forget what it was now. But everyone likes lions on poles!

Next up on the day trip was a visit to Peratallada. OMG I fell in love with this place. I thought Girona had old, winding streets, but they were nothing compared to this! The old part of the town was was moated and walled and included a castle that was about 1000 years old. The church, however, sat outside the walls. I wish I knew why. 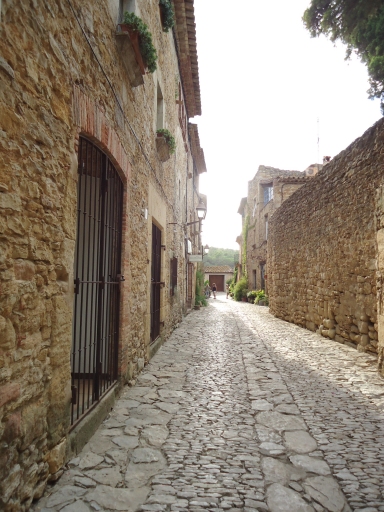 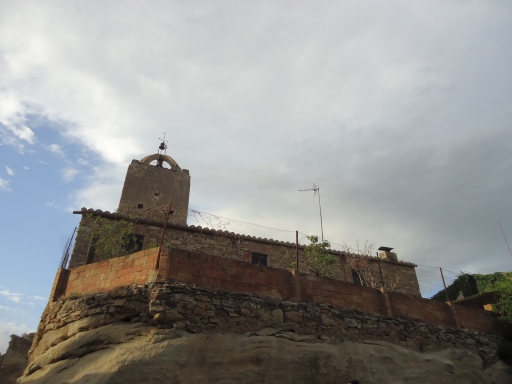 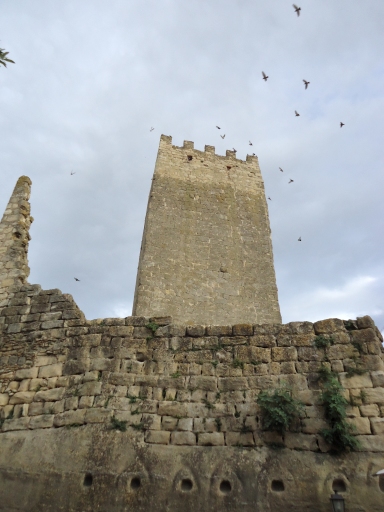 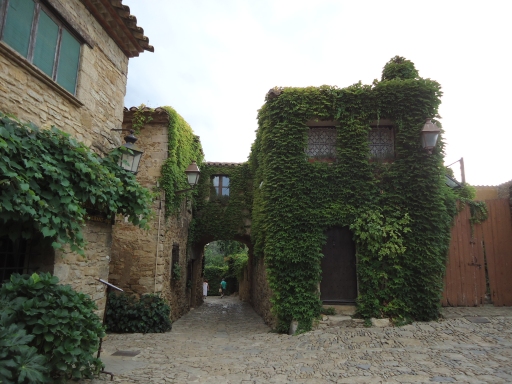 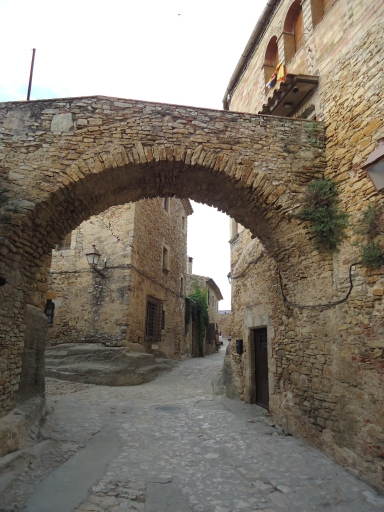 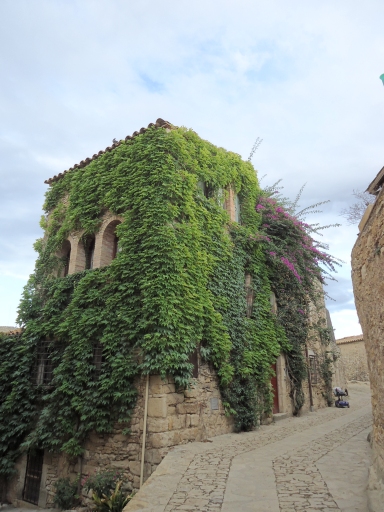 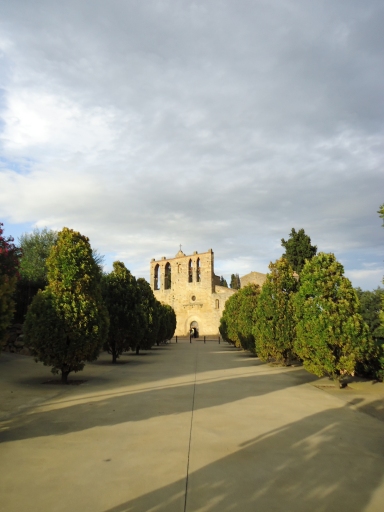 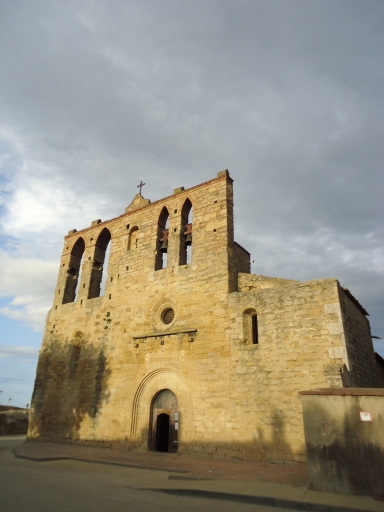 The rest of the days in Spain involved a trip up the hill on the other side of Llafranc to see the views, followed by time spent on the beach in the beautiful sunshine. (I don't think I've seen the sun since returning to the UK. Where have you gone?) 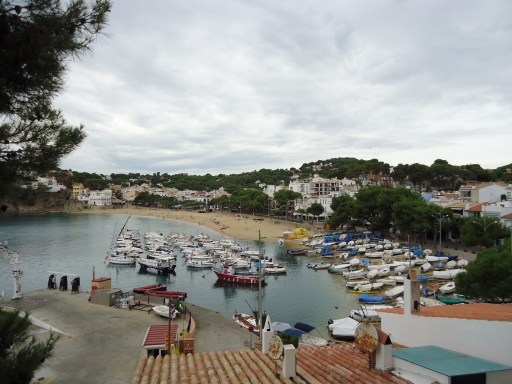 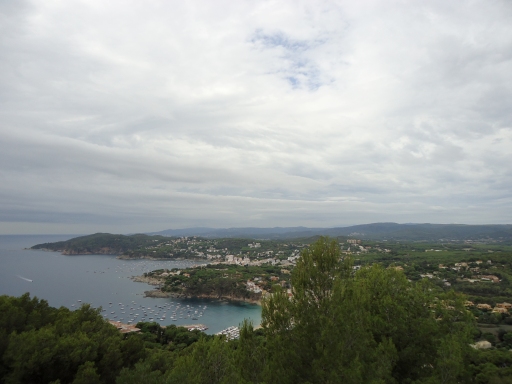 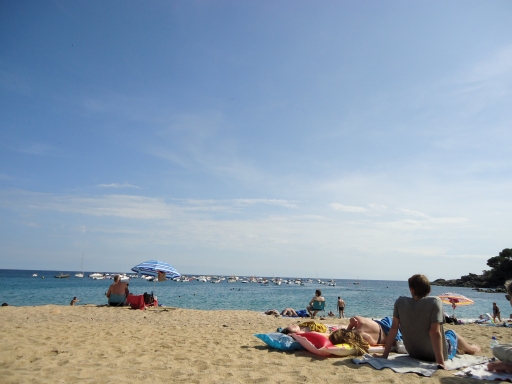 And so back to autumn. I'll miss you, Spain! But at least I won't miss the mosquitoes.

Why are there no pics of our drive through fields?!?!?

I was having too much fun to take any photos.