So it turns out that you can watch the first episode of the new series of the Mighty Boosh online (if you live in the UK at least; I'm not sure about other countries). What I mean to say is, I WANNA POUND YOU LIKE YESTERDAY'S BEEF. Possibly the best show in the world. I love baileys this show.

I went to the library today. And then did no other work at all. But at least I went to the library, right? What I did do was spend ages in Habitat looking at all the nice things. THEY HAVE SO MANY NICE THINGS. I wish I wasn't pitifully poor so I could buy something, anything!, from that shop. Is it so wrong to want to put nice things in my flat? (They had this cool crockery set with pictures of stag!people on the side.)

I then bought some Christmas cards. After last years 'let's make them myself!' fiasco, I realised that buying them was the best option. (Seriously, who's ever heard of a Christmas card without a bend in?)

Later I made myself a stew with the some leftover gammon that I had. 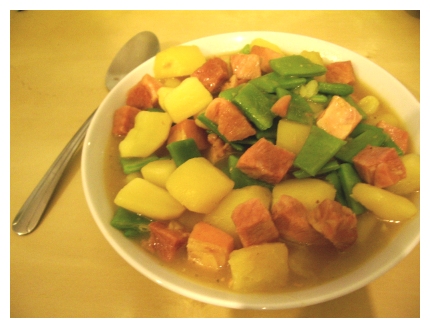 The gammon was tasty. But the whole thing was more salty than a wizened old sea-captain in brine. I'm now trying to rehydrate myself like there's no tomorrow. So thirsty!

Bermuda? Paint me jealous. It must have been nice there. It’s cold and cloudy here. And it gets dark at 4pm. Have you had any snow yet in NYC? When do you normally get snow? I wish it snowed here, but then I hate ice, so maybe I don’t wish for it quite so much.

‘You Are What You Eat’ is horrendously compelling. It’s quite like watching a car crash; you don’t want to, but you can’t stop. The presenter lady (I forget her name) is horrible, and when she checks their poo…! Doesn’t stop me from watching though.
I’ve never watched ‘How Clean is Your House’, mostly because I know that my house is not clean in the slightest, and it would make me feel bad.

Congratulations on your fridge clean. It’s rewarding isn’t it.

Trufax: I’ve never cleaned an oven.
Does that make me a bad person?

Re: that article.
I take offence at this: ‘fashion-challenged, socially dysfunctional geeks’
But that cafe would certainly be interesting (my inner otaku says :D :3 :3 !!!). I’m betting that it’s crazy expensive though. For serious. On the subject of public schools: have you watched the film ‘If…’? If you haven’t then you should watch it. WATCH IT.
And on the subject of schoolboys: I realised yesterday why Ritsuka is just so adorable. It’s because he looks just like a little kitten! I was watching this video the other day
http://www.youtube.com/watch?v=vdQj2ohqCBk
and the kitten in the box really reminded me of him for some reason.

p.s. gammon is like a big lump of bacon (or ham) that you roast. It was mostly all I ate last week.

I’ve always liked bullet points, hence my comments will fit nicely with your previous theme
1. YOU MUST READ THIS: http://www.theage.com.au/news/world/boys-school-cafe-offers-geek-girls-tea-and-fantasy/2007/11/09/1194329511424.html
AND THEN WE MUST GO TO JAPAN. I didn’t like the authors snarky tone but bring on the cafes!
2. what is gammon?
3. I went to Bermuda for 3 day - mostly for business meetings. I want to go baaaack. In NYC it’s cold but there it was lush, warm, with pink sand on the beach and singing frogs. I got to see the end of a rugby game and go to an awesome party (which left me with a major headache - champagne, rum and vodka do not mix!) Oh, and the restaurant manager at my hotel was trying to hit on me so he sent a bottle of champagne to my room. He was old, like 40, but at least he was Italian. It was pretty funny/creepy.
4. In Bermuda I watched a lot of BBC America in the evening. I especially like the shows “You are what you eat” and the one about dirty houses. That show inspired me to go on a fridge cleaning crusade today. I then realized that Paul does not know about fridge cleaning since it looked as if no one touched the fridge since his parents moved out (2 yrs. ago!!) Ewww. Now I am exhausted but it looks almost new!
5. I love your pencil sketch, it’s actually prettier than the photo