The last food post was so timely that of course I had to take months and months before I got this one to you. (I was determined to get the Winchester photos to you first, and it seems like that task took a while.) I actually cooked the last of the dishes in this post over a month ago! Since then two things happened. 1) I was beginning to get very tired after a busy few weeks, so I decided to take some time to prioritise sleep over cooking (aka cooking quick easy meals in the evenings so I could go to bed earlier). 2) My microwave died on me and it took me ages to find a replacement model that didn't break down as soon as I used it. I mean, I know I don't use microwaves to cook any of these recipes, but I actually tend to cook a large batch and then use the microwave to reheat the rest the next day. And there's no way I'm reheating stuff in the oven; that takes forever (see the point about me wanting more time for sleep in the evenings).

Anyway, I now have a microwave that works and I've also caught up on sleep (feels so good not to be sleep deprived, man), so now I should be able to cook some exciting stuff again! Woo!

In triumphant mood, let's have a look at what I cooked last time: 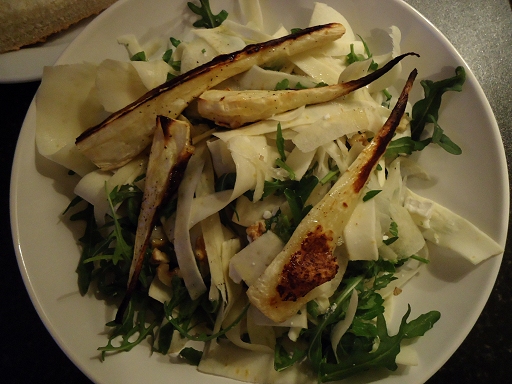 Warm parsnip and pear ribbon salad
This salad looks great! You sit down with it feeling so proud that you made something that looks so pretty. If only it tasted as good as it looked! The roasted parsnips were nice (when are roasted parsnips not nice?) and the goats' cheese was nice too. But my problem was that there wasn't enough savoury goats' cheese to offset all the sweetness that came from the pear and the honey dressing. Too much sweetness in savoury dishes just doesn't do it for me, I'm afraid. Plus, I'd never eaten raw parsnips before. It turns out they're surprisingly tasteless. I mean, they're basically just ribbons of fibre. You're chewing away on mouthfuls of this salad thinking, "Wow, this sure feels healthy. There's so much fibre here. I feel like I'm eating a tree." But, you know, it looks amazing, so there is that. 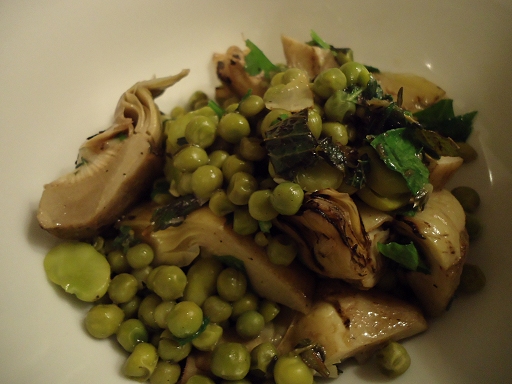 Braised broad beans, peas and artichokes with thyme and mint (recipe from "Nigellissima: Instant Italian Inspiration" by Nigella Lawson)
This was really yummy. I don't think I'd ever really eaten artichokes before, but they get the thumbs-up from me. Nigella calls for artichoke bottoms (and I had so much fun laughing at the word bottoms) but I couldn't find any. In fact, almost the only artichokes I could find were chargrilled artichoke hearts that had been packed in a jar with oil, so I used those. Personally, I really liked the smoky, chargrilled taste that they added. I didn't add the vermouth to this, and I also have to warn you: I don't like peas! I don't really like broad beans either! What am I doing??? But, once again, Nigella shows that she really knows how to cook peas to my taste. The garlic and the thyme worked wonders. Also, Nigella suggests popping the broad beans out of their leathery coats before cooking them; I'd never done that before but it turns out it makes them a lot less sour to eat. In conclusion: a yummy dish, but (and it's not stated) the portion size makes this a side-dish not a main. Be warned! 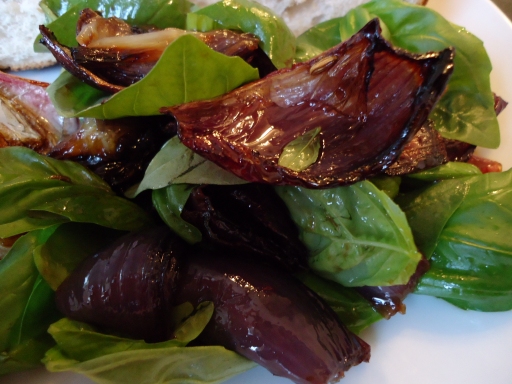 Roast red onions with basil (recipe from "Nigellissima: Instant Italian Inspiration" by Nigella Lawson)
Oh, sweet, crispy, oniony goodness! These are well-nice, which is to be expected, as roasted onions are always well-nice. I'm not entirely sure about the addition of the fennel seeds, but I think that's mostly because I'm not used to eating them. Along with the basil, they gave this dish a rather perfumey flavour. Oh, one word of caution though. This dish will spatter oniony oil all over your oven. Basically, everything I cooked in my oven after this tasted of onions. In the end I gave up and cleaned the oven. Was this dish worth it? Yeah, maybe it was. 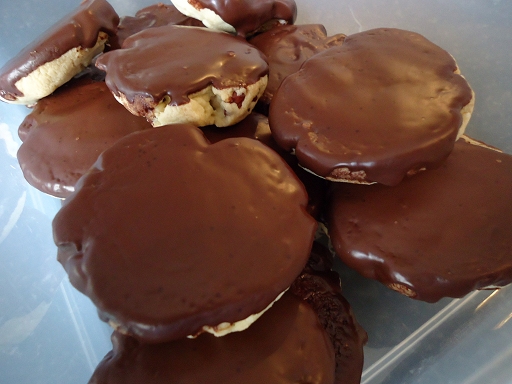 Pecan shorties (recipe from "The Great British Bake Off Big Book of Baking" by Linda Collister, which was given to me by my grandparents last Christmas)
I decided to make these as a tribute to my late Nan, as this cookbook was a present from her and my granddad at Christmas time. I can remember lying in bed the night after her funeral thinking "I'm going to bake something this weekend from my Nan's book". If only they'd turned out nice! I mean, they look nice. Look at all that chocolate! The issue for me was that it's dark chocolate. The shortbread biscuits don't have much sugar in them, which I think means they need a sweeter chocolate to match them, rather than a bitter dark chocolate. Also, I made two mistakes with these. 1) I cooked them in the oniony oven (see above) so they had an unnerving oniony taste in the background, and 2) I burnt the pecans, which made them bitter. So these ended up as bitter onion biscuits with bitter chocolate on top. Not my best work. I still got some compliments when I took them into work, but I think people were just being nice. Thanks for the book, Nan. Aren't you glad you have a granddaughter who can give you such a bitter, oniony send-off? 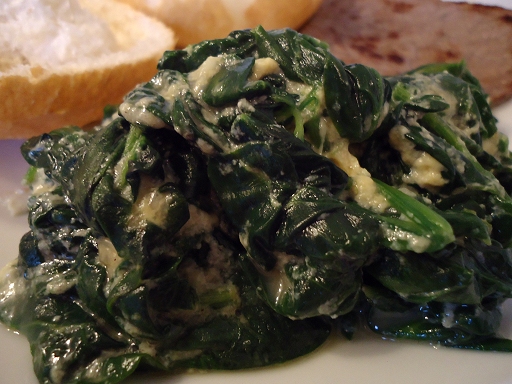 Spinach baked with ricotta and nutmeg (recipe from "Nigellissima: Instant Italian Inspiration" by Nigella Lawson)
I'll admit it: this is not a good-looking dish. (But I challenge you to show me any pile of cooked spinach that looks good.) I didn't add the vermouth to this, which is perhaps where I went wrong. I was expecting it to taste amazing and it was... ok. Perhaps it would be better with a stronger-tasting cheese? Because this pretty much just tasted of nutmeggy spinach. Don't get me wrong, it's pleasant enough to eat. But I find that spinach starts tasting a bit bitter when I eat so much of it. 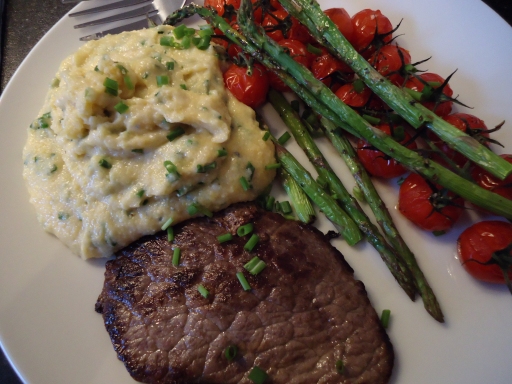 Steak with cheese and chive polenta
Look at this! A dish that looks rather good and tastes good too! I'm not normally a fan of blue cheese, but that polenta has such a punchy, great taste. On top of that you have the bright, sweet taste of the tomatoes, and then the asparagus. And when you think it can't get any better, you have a big, meaty slab of beef too. Very nice. It's a bit of a faff to make because you have lots of things on the go at the same time; and is there an actual way to cook polenta without it going bloop bloop bloop and spraying polenta all over the hob? But it's worth it. Oh baby. 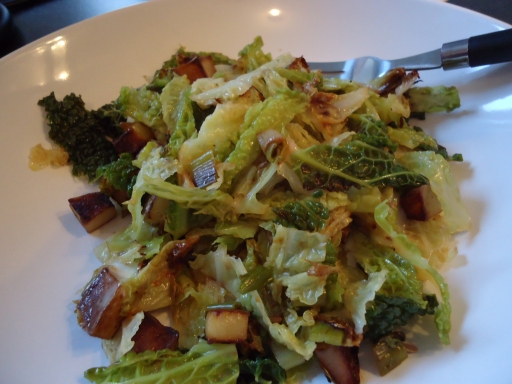 Savoy cabbage with potatoes, fennel seeds and Taleggio (recipe from "Nigellissima: Instant Italian Inspiration" by Nigella Lawson)
This wasn't super amazing but it was nice enough. I shovelled it into my face pretty quick, so I must have enjoyed it. But at the end of the day it's basically cabbage and potatoes. The thing that makes the dish is the cheese that holds it together. I had never eaten Taleggio before, though, and hadn't realised it was quite salty, so I completely over-salted this dish the first time I made it. And, you know what, I'm uncertain about the fennel in this dish. I'm beginning to wonder if I actually like fennel. Hmm. One to ponder on. Oh, and this is another one that seems to be a side dish from the portion size, jsyk. 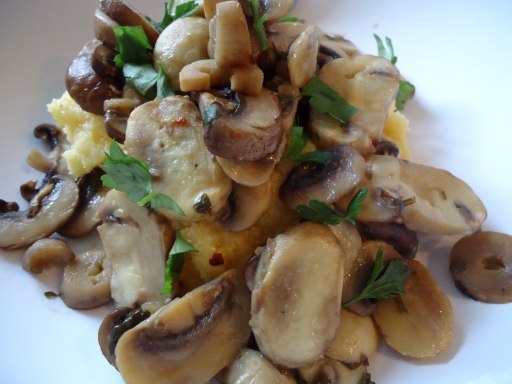 Garlic mushrooms with chilli and lemon (recipe from "Nigellissima: Instant Italian Inspiration" by Nigella Lawson)
Guys. Guys. This dish may look rather pale and insipid. Don't let that put you off. Within those mushrooms is a taste explosion! Oh God. It is so good! Eating it is like being punched in the face with garlic and lemon and mushrooms. But, like, in a really good way. It is good! It is so so good! I hoovered this up in a blink of an eye. But, this is another one of those "don't even try to pretend the portion size is for a main meal" dishes. I tried to eat it as a main meal with some polenta. I then went and had a snack immediately afterwards. But who cares? Oh man, I'm salivating just looking at the picture.

Most grannies’ #1 job in life is telling their grandkids how great the flawed cookies they’ve just baked taste, so your tribute is probably more fitting than you realize! (Also they are very pretty-looking cookies, and I’m sure they were better than you think they were.)

The mushrooms, the polenta, the steak, oh my god. Roasted parsnips. Goodbye, I’m too hungry to finish.

Your enthusiasm for my food posts gives me joy! I’ve got a load of photos sitting around waiting for me to make another post. But, ah, where to find the time?

I’m happy that I was able to make good-looking shortbread. Rarely is it possible to make things that both look and taste good, so I’m happy with one out of two. Plus, they were easily edible, and sometimes that’s all you need from a biscuit.