I've got quite a few photos to share with you today. I hadn't cooked any new recipes for ages, but then suddenly I cooked a lot in a row. It seems I was feeing optimistic, with mixed results. 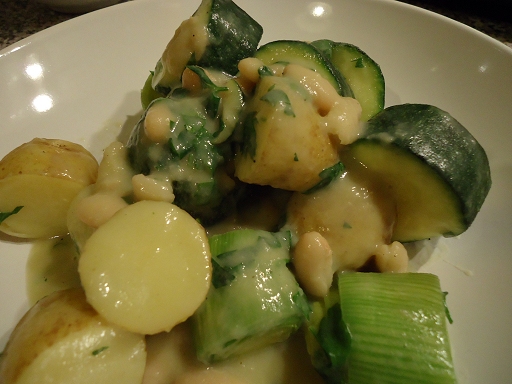 Creamy vegetable casserole
After eating all that chicken in my last post, I was fancying something veggie and easy. This recipe looked to be just the ticket. The only problem is: it turns out it's not very nice. Oh, it's not horrible; just boring and badly-cooked. I say badly-cooked, because I found that the cooking time was not nearly long enough to cook such large chunks of courgette and leek. (Have you ever tried chewing your way through an inch of raw leek? You shouldn't.) Maybe I'm at fault for using a pan that was too small. Maybe. At the same time, the dish is boring because it tastes of shop-bought leek and potato soup and nothing else. Why go to all that trouble when all you're going to get at the end of it is leek and potato soup? You'd get a much nicer result if you just heated up the soup as per package instructions and then cooked up the potatoes and veg on the side. 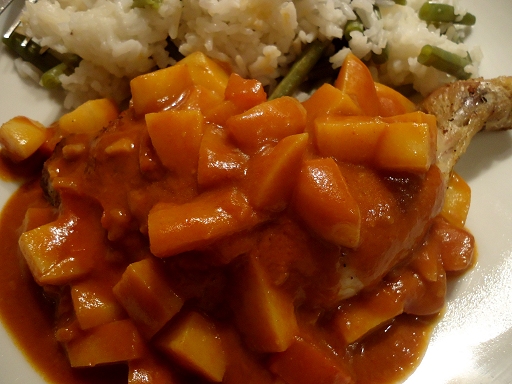 Chicken legs with Portuguese sauce (recipe from "Chicken Leg" by Hoe Yee)
I wasn't sure what to make of this recipe at first glance. (That's a feeling I experience a lot with this book, because it's a food culture that I'm not familiar with.) The recipe talks of "Portuguese sauce" like I'm supposed to know what that is. I've never heard of it! And potatoes? I've certainly not heard of a sauce that contains potato chunks before. It turns out there's nothing to be worried about. The chicken is deep-fried (or rather: pan-fried then baked in the oven, as I prefer to do it), and then topped with a sauce that's thick, rich, sweet and ever-so-slightly peanut-y. It was really really nice. 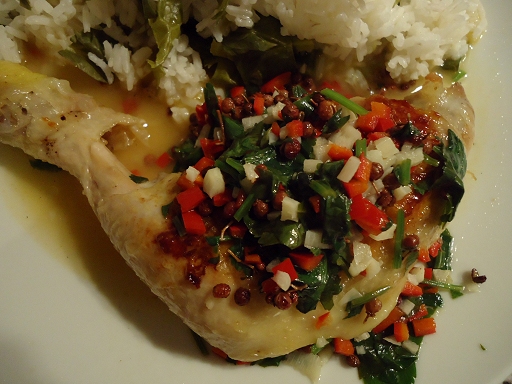 Chili and "Sichuan" pepper chicken legs (recipe from "Chicken Leg" by Hoe Yee)
And another one I wasn't sure about! The picture that came with the recipe looked nice, but I'd eaten Sichuan pepper only once before. Would it be too hot with all that chilli as well? The cooking method was also a bit weird. In this one you steam the chicken legs for 20 minutes, then deep-fry them. I have never heard of steaming followed by deep-frying before. Of course, I didn't deep-fry mine. I steamed for 30 minutes (to ensure the chicken would be cooked by the end of the process) then pan-fried for 20 minutes. The other change I made to the recipe was in not adding the Chinese rice wine to the marinade. The result, however, was actually nice! Not only was the thin sauce sweet, savoury and fresh, but the chilli wasn't too hot either. Maybe the lack of heat was because the chilli was paired with the Sichuan pepper which has more of a cold mouthfeel, like mint. Speaking of mouthfeel: as I say, I had only eaten Sichuan pepper once before, and not in nearly as high a quantity as this. Which means I did not realise that Sichuan pepper not only feels cold, it feels tingly. I was almost halfway through the dish before I noticed the sensation, and I had to do some quick googling about Sichuan pepper to make sure that this was normal and that I wasn't dying (spoiler: it was indeed normal and not at all dangerous). In the end, though, the Sichuan pepper still defeated me (spiritually, rather than physically). The tingling sensation was pleasant, but this quantity of Sichuan pepper leaves the dish with a bitter aftertaste that I didn't quite like. Half the amount of Sichuan pepper and it would have been lovely. 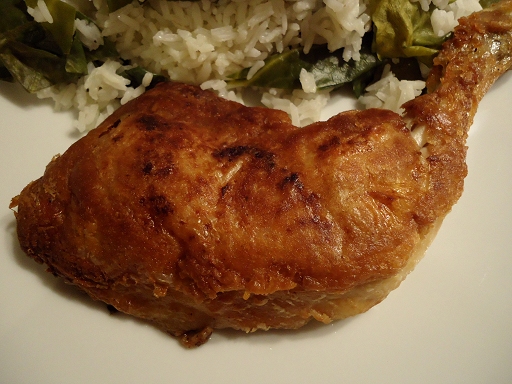 Crispy fried chicken (recipe from "Chicken Leg" by Hoe Yee)
Look at that chicken! This recipe doesn't lie: you certainly do end up with crispy chicken. It's all due to the baking powder and bicarbonate of soda in the batter. Speaking of batter, the recipe called for plain flour, tapioca flour and wheat starch. Seeing how I could only find plain flour, I used a mix of plain flour and cornflour instead, which seemed to work fine. Oh, I also left the Shaoxing wine out of the marinade. Please bear in mind that this was not an easy dish to make. Not only do you have to deep-fry the chicken (I pan-fried it, then baked it in the oven; you know me by now), but the marinade also calls for ginger, red shallot and garlic juice. Ignoring the fact that I don't know what red shallots are, so used normal shallots instead, I. Still. Hate. Juicing. Things. It takes so long! But, then, I know that the taste at the end is usually worth it! And, true to form, this recipe did taste nice (if slightly greasy on the batter side of things), but it also tastes much like other fried chicken recipes in the same book. I'm not sure I'd bother with this one again, but it was worth trying once, if only to see how crispy that batter was. 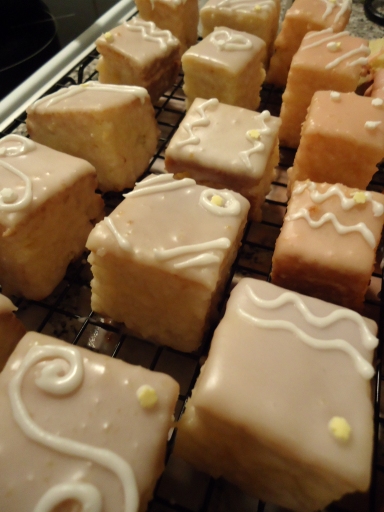 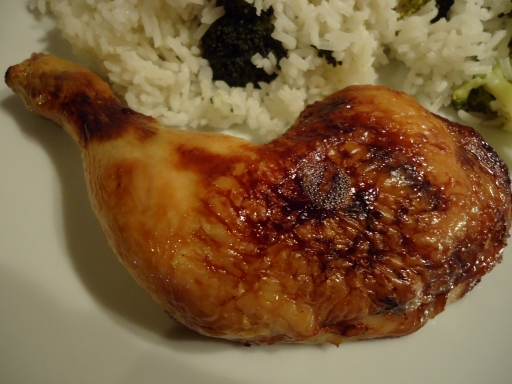 Japanese style baked chicken legs (recipe from "Chicken Leg" by Hoe Yee)
This recipe started with juicing some ginger. My favourite thing to do! (╯°□°）╯︵ ┻━┻ Once done, though, the rest of the recipe was easy: marinate, bake, brush on sauce and bake a bit more. I baked mine for 50 minutes, so I waited for 40 minutes before brushing on the sauce, rather than the 20 minutes given in the recipe. I didn't add the rice wine or Shaoxing wine to this recipe, so it probably didn't taste as Japanese as it should have done. That said, it was tasty: sweet, and soy sauce-y with a bit of ginger. Nothing much to write home about, but pleasant. 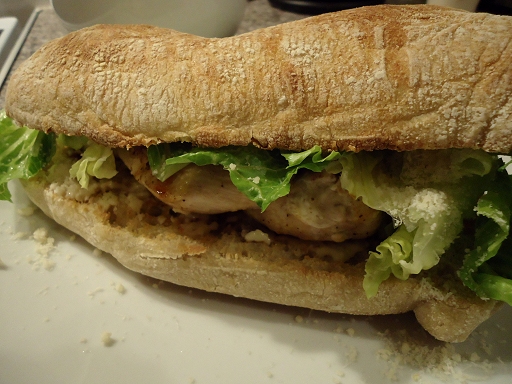 Chicken Caesar burger
I could only find large ciabatta rolls, so this burger was a beast. Look at it! Eating it felt like a marathon. It was tasty though, and this is coming from someone who isn't the world's biggest chicken Caesar fan. You know, it was surprising just how accurately this burger tasted like a chicken Caesar salad. I think the mayonnaise sauce is the key (and I had been worried that the anchovies would make the sauce horrible, but you actually couldn't notice them; they just added to the overall Caesariness of the dish). My only complaint is that the recipe tells you to fry the chicken for 8 minutes, but mine was still really pink by that point. I cooked it for far far longer; it was still moist when it was done, but the garlic on the outside of the chicken had burnt, adding an unpleasant flavour. Maybe I hadn't flattened my chicken enough beforehand? I tried to flatten it as much as the recipe asked, but flattening a whole chicken breast is surprisingly hard. Oh, and I didn't use parmesan flakes on top of the chicken; just grated parmesan, but I don't think that affected the taste one jot.

Your willingness to juice garlic is commendable. I didn’t even know such a thing was possible. Often I am too lazy even to peel and mince garlic; I just use granules. This is why I have no FOOD POSTS.

The superhero battle between the fancycakes and the icing was heroically described. Marvel couldn’t have done it better. & maaaan, I don’t know where you work, but those are some lucky-ass people! The cakes look really delicious, for all that they aren’t completely flawless.

I also believe you are the world’s foremost expert in cooking chicken legs. I’ve never seen them served this way, with the thigh & drumstick together, but clearly you have teased out the secret of perfecting them. That’s actually legitimately awesome.

Although eating inch-thick slices of leek seems like something out of a reality-show food challenge.

The rest of it, however, is verging upon the “cookbook photos,” and to that I say CONGRATULATIONS ON THE FOOD POST.

tbh I normally use garlic granules in my everyday cooking! I honestly can’t be bothered with all the peeling and chopping and your hands smelling of garlic for the next three days.

Before I embarked on this chicken leg journey, I had no idea that whole chicken legs were a thing you could buy. I’ve discovered that they’re one of the cheapest cuts of chicken available, and they’re huge! Plus, they stay moist because they’re cooked on the bone. I’m a convert.

I’m glad you were entertained by my ranting about fondant fancies. The hope of generating a good anecdote is pretty much all that kept me going at the end there.