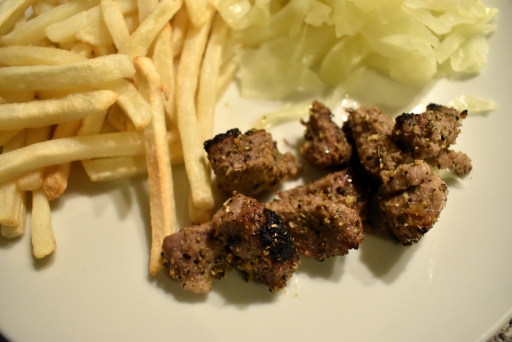 Grilled lamb shoulder (recipe from "The Groundnut Cookbook" by Duval Timothy, Jacob Fodio Todd and Folayemi Brown)
Ok, so in the cookbook this recipe is called "grilled heart" and they advise you to use chicken hearts. But I am squeamish about offal and there was a suggestion to use lamb shoulder instead, so I took it. This recipe uses the red rub I mentioned in the previous food post; I had some left over so it seemed the perfect time to try it. (As I mentioned last time, there was no sumac in my red rub and I had added extra lemon juice to compensate.) This recipe suggests 4.5 tablespoons of the dry rub to 500g meat, and then says to marinate with lemon juice, olive oil and honey for half an hour. You sprinkle more red rub on over the meat once it has been cooked. But the method of cooking sounded a bit weird to me. You put the meat and the marinade in a dish (I used a roasting tray) and heat it under the grill for 20 minutes. I have never grilled anything containing so much liquid before! I wasn't sure how it would turn out, but it worked. What you end up with is meat that is still juicy but slightly charred and crunchy on top. It was very delicious. Maybe it would be delicious with chicken hearts too, but someone else will have to test that one out. Oh, one final thing to note: I couldn't find any pre-diced lamb shoulder (the shop had run out) so I bought a half-shoulder and butchered it myself. That was intense, but kinda fun. 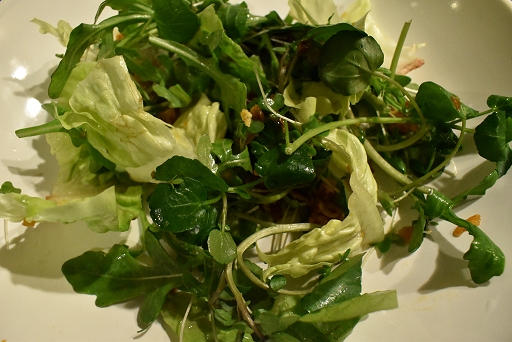 Green salad with tangerine dressing (recipe from "The Groundnut Cookbook" by Duval Timothy, Jacob Fodio Todd and Folayemi Brown)
This is one of the rare recipes in this cookbook that isn't absolutely amazing. The salad dressing is made from caramelised onions, tangerine zest and juice, ginger, sugar and a couple of other things. It was too sweet for me. I can't handle sweet things in savoury food very well. I thought maybe the ingredients together would make it all work somehow, but not this time. It was flavourful, and not horrible by any means, but just not for me. Also, caramelising onions takes forever, so if I'm going to do it I want it to be worth the time. 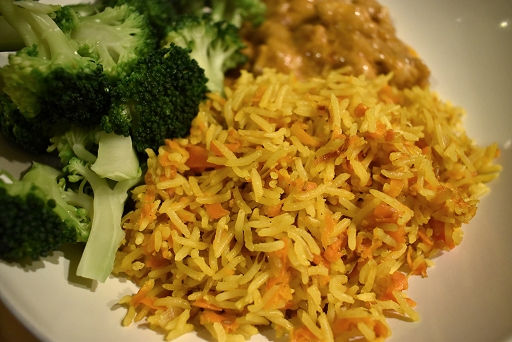 Pilau (recipe from "The Groundnut Cookbook" by Duval Timothy, Jacob Fodio Todd and Folayemi Brown)
Thankfully "The Groundnut Cookbook" is back with the good stuff in this recipe. We're told that it's not a traditional pilau, but one that Folayemi Brown came up with, with added lemon juice among other changes. It is utterly utterly delicious. So so good. Oily, fresh and flavourful, and not too much harder than making plain steamed rice! The recipe calls for fresh turmeric which turned all my tea towels yellow and I'm not even mad about it. Oh, one substitution: the recipe asks for white peppercorns, which are then crushed. I couldn't find any so just used pre-ground white pepper, which I doubt will have made much difference. Man, my mouth is watering just thinking about how tasty this rice was. 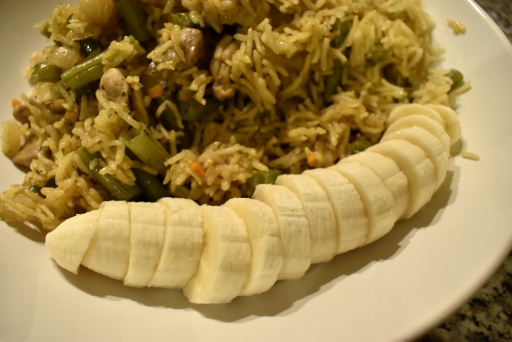 Banana (recipe from "The Groundnut Cookbook" by Duval Timothy, Jacob Fodio Todd and Folayemi Brown)
Ok. Calling this a "recipe" is a bit of a stretch. This cookbook does this sometimes: it won't have a recipe but just a suggestion for how to eat certain things. This suggestion is: if you're eating flavoured rice, like pilau, try eating a chilled banana on the side instead of yoghurt. Apparently it's common to do this in Tanzania. I was sceptical; I've already mentioned how I struggle with sweet things in my savoury food. But do you know what? This actually works! It's ever so slightly too sweet for me, but the cool creaminess of the banana really offsets spiciness well, and I was quite happy to eat it with my biryani. 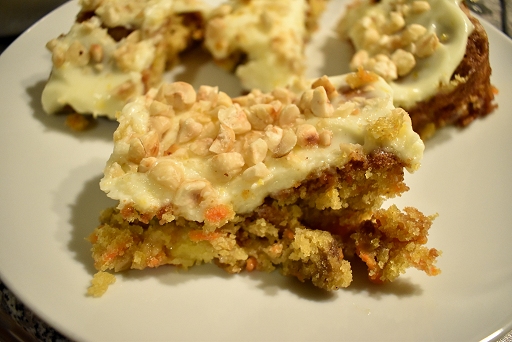 Golden carrot traybake (recipe from "The Great British Bake Off Big Book of Baking" by Linda Collister)
Who knew that carrot cake could be so disappointing? This recipe is a different take on a carrot cake. The only spice in the mixture is a little cinnamon. Instead the carrots are bulked out with fresh pineapple, dried apricots, sultanas, and orange zest and juice (from a navel orange, which I couldn't find, so I used a normal one). No lemon juice in the icing either, just mascarpone, orange zest and icing sugar. Far too much icing sugar. I didn't think it was possible for me to say this about a cake, but this cake is too sweet. I always worry that I am going to find carrot cake icing too sickly sweet and too rich, and it never is, until now. The punch of sweetness from all the fruit in the cake doesn't help either. It's ok (look, no cake is ever going to be truly bad) but it makes me a little nauseous to eat it. If we were going on flavour alone the cake would get the thumbs down from me but, oh man, there's more. The cake sunk in the middle when it came out of the oven. An online search suggested that this is because the cake may have been undercooked. But I am certain the cake was cooked fully. The recipe said to bake it for 30-35 minutes, but mine was still trying to slop out of the tin at that stage. I cooked it for another 15-20 minutes and while it was still worryingly jiggly, the skewer came out clean. The cake also took ages and ages to cool. Turns out (I realised, as I cut the cake into slices and tried to serve it) a cake can also sink in the middle if it contains too much moisture, and presumably the moisture will make it cool slowly too. The fruit, orange juice and carrots in this recipe all served to make this one of the wettest cakes I've ever made. It barely held together (the photo above shows the nicest looking slice, because boy were there some ugly ones). I suppose I could have cooked the cake for longer to remove more moisture, but it was already threatening to burn on top, and the edges were getting dry. So flavour-wise and texture-wise, this cake was wrong, just wrong. I thought I liked carrot cake, but I think the trauma of this one is going to make me rethink my choices.