In my last food post I wrote about baking a pie for the Queen's Jubilee. Today, in a strange turn of coincidence, I write this on the day of the Queen's funeral. (I haven't, however, made a funeral pie.)

In the intervening time I have amassed quite a few recipes to talk about. As I mentioned last time I've been travelling a lot, then after my period of travelling I've had a period of doing lots of overtime at work, so it's taken me a while to sit down and write.

You'll see that a lot of these recipes come from "The Groundnut Cookbook" by Duval Timothy, Jacob Fodio Todd and Folayemi Brown. I am seriously impressed with this cookbook. Most of the recipes I've tried from it have been absolutely delicious. The chefs who wrote it know their stuff, my goodness. 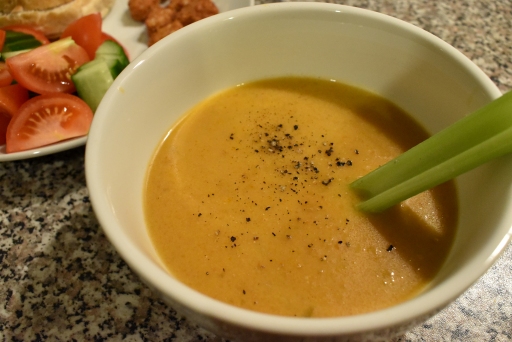 Groundnut soup (recipe from "The Groundnut Cookbook" by Duval Timothy, Jacob Fodio Todd and Folayemi Brown)
The introduction to this recipe says that the name "groundnut soup" traditionally refers to the groundnut stew with chicken (I made it a while back and it was amazing). But in this recipe they've turned it into a liquid soup without meat. It is still absolutely delicious. It's lighter than the stew with a creamy vegetable flavour. You almost think the taste is too light, but then you get a mouthful with the salt flakes and black pepper on top and the taste rounds out to something perfect. The recipe says to blend the soup with a hand blender. I don't have one of those but my food processor worked just fine. 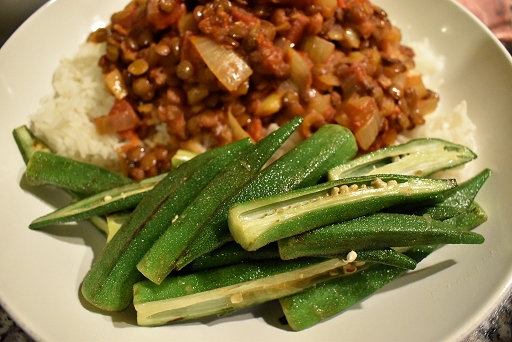 Pan-fried okra (recipe from "The Groundnut Cookbook" by Duval Timothy, Jacob Fodio Todd and Folayemi Brown)
I'd never eaten okra before! I was a bit scared because I had heard a lot of people don't like the slimy texture. For me, the texture was unusual and the mouthfeel took some getting used to, but the strong green bean flavour of okra really makes it worth it. This recipe adds a little sweetness with lime juice and honey, and it's just the right amount. Really really tasty. 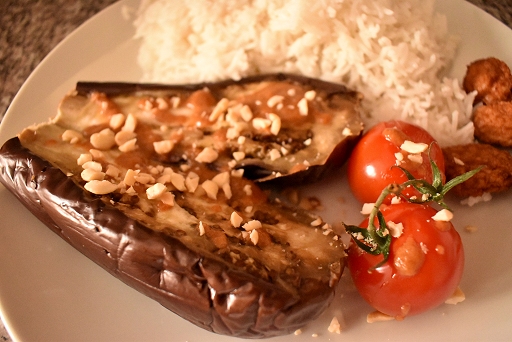 Roasted aubergine and tomato with peanut sauce (recipe from "The Groundnut Cookbook" by Duval Timothy, Jacob Fodio Todd and Folayemi Brown)
This is a very savoury dish, an umami punch in the face dish. I had never eaten aubergine with peanut butter before but the combination works really well, particularly with the added cumin. The sauce is very punchy as I say, but it works great when mellowed by the wateriness of the aubergine. 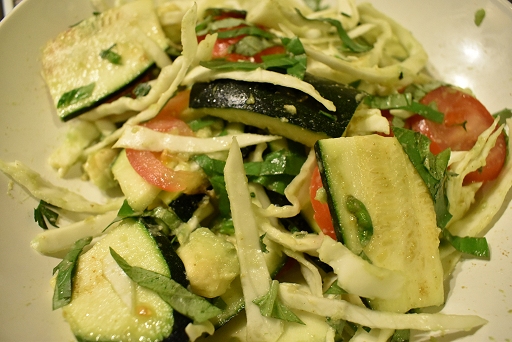 White cabbage and courgette (recipe from "The Groundnut Cookbook" by Duval Timothy, Jacob Fodio Todd and Folayemi Brown)
I'll put my hand up and say I was a bit worried going into this dish. A raw cabbage and raw courgette salad sounds unendingly boring and very woody. I was imagining lots of fibre and not much else, so I was surprised to find it was actually really tasty! The tomatoes, herbs and dressing add a lot of flavour and the avocado makes it nice and creamy. I'd never eaten raw courgette before (I hadn't even known it was possible) but it's actually pleasantly soft and pillowy. 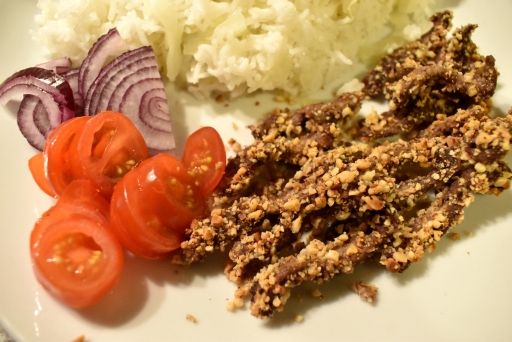 Beef suya (recipe from "The Groundnut Cookbook" by Duval Timothy, Jacob Fodio Todd and Folayemi Brown)
Suya is a very popular street food in Nigeria and other parts of West Africa. It seems like there are many ways to make the spice mix you coat the grilled meat with, but if they are all as tasty as this version I can see why the dish is as popular as it is. The recipe says that ideally you should add Selim pepper to the spice mix but as I couldn't find that I used the recipe's suggested substitution of black pepper and a pinch of nutmeg. I also couldn't find roasted peanuts to add to the spice mix (my supermarket had run out) so I bought blanched peanuts and toasted them in a pan. The recipe said to grind the peanuts and spices together in a blender; I don't have a blender and didn't feel like getting out a food processor so I just ground mine in a pestle and mortar instead. Something about the spice mix with the peanuts is so moreish and goes really well with the beef. It's traditional to serve the meat with tomatoes and raw onion, which the recipe does, but to be honest I would prefer it without. I don't really like raw onion anyway, and I found the taste of the onion and tomatoes strong enough that I couldn't taste the delicious spiced beef as much as I wanted to (and I wanted to taste it very much; it was so good). 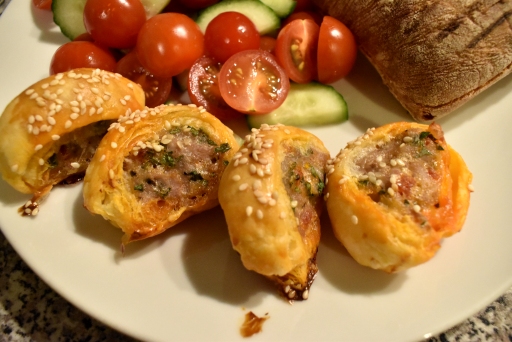 Chorizo sausage rolls
This is the only recipe this time not to come from "The Groundnut Cookbook"! I have made chorizo sausage rolls before from a different recipe (Waitrose website) and wanted to see how the two recipes compared. This Tesco recipe is certainly easier than the previous one because you don't have to make your own puff pastry. They are tasty and crispy too. However, I think I preferred the Waitrose recipe slightly more because that contained chipotle paste and so the sausage rolls were more flavoursome. With the Waitrose recipe I can remember blanking out when I had to do the maths to work out how to slice up the pastry. This time I didn't blank out but my sausage rolls came out very thin. The recipe says to make the pastry 35cm long, then slice it into 15-17 pieces, each about 3cm wide. Dear recipe, that's physically impossible. 3cm multiplied by 15 is 45cm! So I made 15 thin ones instead. You were given a choice of making large or small sausage rolls; both were the same width but the large ones had more filling. I'm glad I went with small because the large ones would have been so big and thin they would have looked like weird meat cookies. 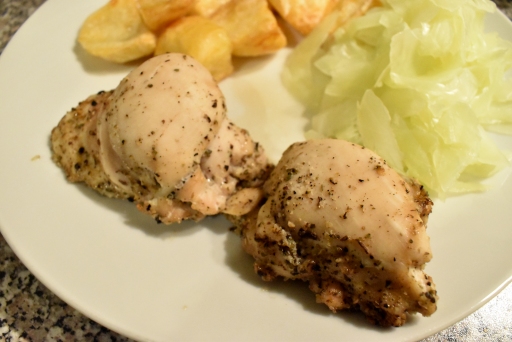 Red rub (recipe from "The Groundnut Cookbook" by Duval Timothy, Jacob Fodio Todd and Folayemi Brown)
This recipe is for a dry rub. It doesn't say how to use the dry rub at all, which left me a bit confused because I've not really used one before. I decided to put mine on chicken thighs because chicken thighs were on offer that week. The recipe doesn't mention how much rub to put on how much meat. In the end I put half the rub (they say the whole amount of rub you make is about 140g) on 1kg chicken thighs. I was worried that half wouldn't be enough but actually it came out just right. The chicken doesn't look very coated but the flavours were still nice and punchy. Actually the flavours were really good: salty and savoury and super tasty. Alas, the only problem was that my supermarket had run out of sumac, which is a key ingredient. I substituted lemon juice instead. Hopefully the substitution didn't affect the flavour too much but it certainly made my rub less dry and not red at all. So if you ignore the fact that my version wasn't red and wasn't really a rub, it was still a great success. I'm looking forward to using the other half that I've set aside.