Hello! I'm back with another food post! This one is way overdue, but doesn't contain too many recipes because I took an extended break from cooking exciting things over January. Basically, my fridge died at Christmas, so I suffered through a tinned food ordeal for a month until my new fridge arrived (despite the name of this blog, tinned food is not my favourite thing in the world). I was so happy when I got a working fridge again, you have no idea! 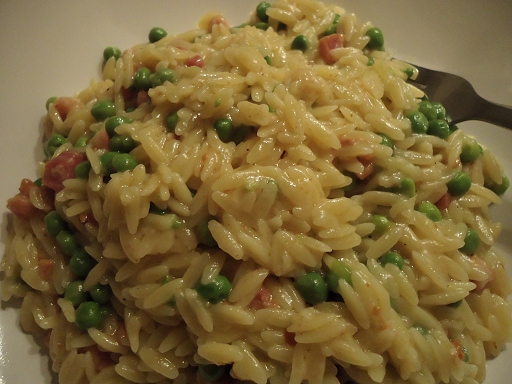 Pasta risotto with peas and pancetta (recipe from "Nigellissima: Instant Italian Inspiration" by Nigella Lawson)
This recipe used orzo, the rice-shaped pasta, to make a fake risotto. I'm not a fan of peas, so I was originally a bit hesitant, but I had no need to be. Do you see how glossy this was? It had a lot of butter and Parmesan in it so it was all oozy and rich. You make it just like a real risotto, only you don't have to stir the pasta nearly as much as you have to stir the rice. Tasty success! Well done, Nigella. 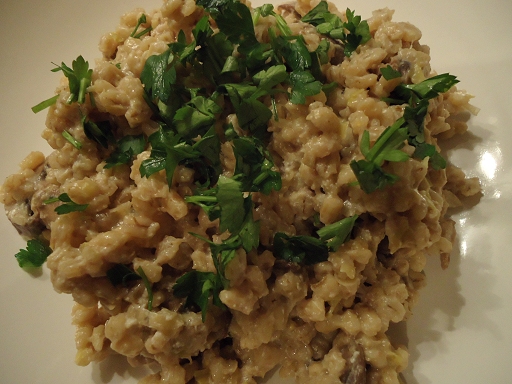 Pearl barley risotto with mushrooms (recipe from "Nigellissima: Instant Italian Inspiration" by Nigella Lawson)
Flush with my recent fake risotto success, I was confident going into this one. Nigella actually makes a farro risotto here, but suggests you can use pearl barley instead if you can't find any farro (I couldn't find any farro). I cooked it for 15 minutes longer than Nigella suggested because the pearl barley took a while to soften up. The only other change I made was in leaving out the Marsala. Mistake? Maybe. Because good God this was awful! Do you see how it looks like a big pile of stodge in this photo? It tasted like a big pile of stodge too! (It was actually hard to dish this up because it kept sticking to the spoon D:) The taste was earthy and bland. I always find mushrooms a little bland, and I don't think the pearl barley helped. Where was the taste of the leaks, garlic, cheese and everything else I put into this? Who knows? Nigella said this made 4-6 servings. I originally tried to split it into four servings, but had to give up eating as I was halfway through the first bowl because I got too bored. You don't know how disappointed I was as I re-portioned this out, realising I'd have to eat it for another five nights. Christ. 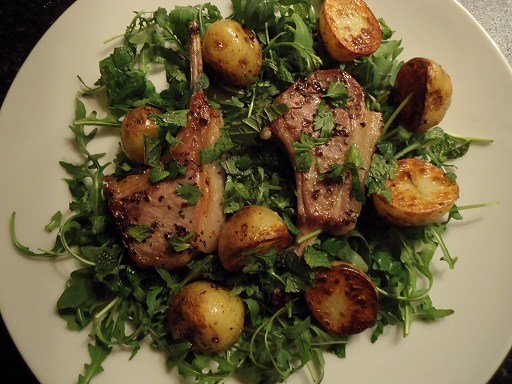 Lamb cutlets with mint, chilli and golden potatoes (recipe from "Nigellissima: Instant Italian Inspiration" by Nigella Lawson)
I was understandably more nervous going into this one ("once bitten, twice shy" and all that). For a start, I had no idea what a cutlet was; cue frantic YouTubing to find out. Also, I know that lamb is supposed to be best pink, but I am such a heathen when it comes to meat. I LIKE IT WELL-DONE I'M SO SORRY. Pre-performance nerves aside, this recipe was gorgeous! I cooked the lamb as per the instructions and it came out a perfect pink inside. I was still a little squeamish about that, but the more I eat it the more I'll get used to it. The taste was salty and minty and yummy (and not too hot from the chilli flakes at all). And those potatoes that you fry off in the fat from the lamb? Wow, man. Wow. 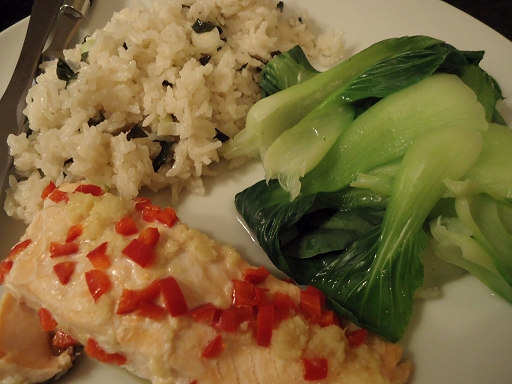 Thai salmon with coconut rice
Do you know what? I was worried that the chillies in this dish would be too strong. (I am a wimp who can't handle too much heat.) Turns out that it wasn't too hot for me at all. There was something else I should have been worried about instead though! This was...hm. The first few mouthfuls were really nice. My problem, though, was the rice. Rice cooked with coconut milk is really sweet, creamy and rich. It would be lovely as a desert, but I'm really not good with overly-sweet or overly-rich foods in my savoury dishes. It made me feel a bit ill, all in all. I mean, when you're using mouthfuls of salmon to try to cleanse your palate and remove some of the richness, you know something's gone wrong. In small amounts, taste-wise, this dish was lovely. In dinner-sized amounts, it was too much for me. 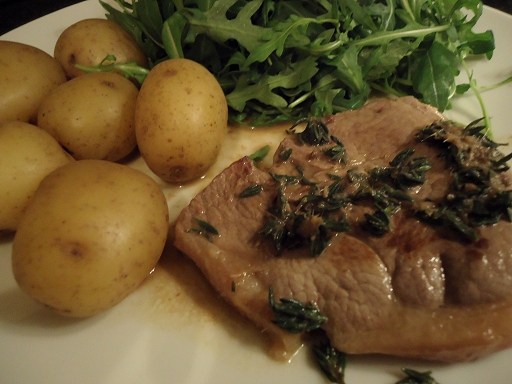 Lamb steaks with anchovies and thyme (recipe from "Nigellissima: Instant Italian Inspiration" by Nigella Lawson)
Once again, I was nervous going into this one. I am not the world's largest fan of anchovies, and the thought of pairing them with meat just seemed weird. Also, I decided to leave out the wine again. Was this a disaster waiting to happen? Cooking-wise, things weren't quite perfect. I don't know what I did wrong, but the steaks seemed more raw inside than nicely pink (maybe I should have let them come to room temperature before cooking?) Other than that, this was a major success! The anchovies didn't make the dish weird at all; together with the thyme they made a really salty, punchy sauce. It worked really well with the lamb. I can see why Nigella recommended to have bread with this one, so you can sop up all the tasty juices, but the dish worked pretty nicely with potatoes too. It was salty enough that I felt like I'd buttered the potatoes, even when I hadn't! 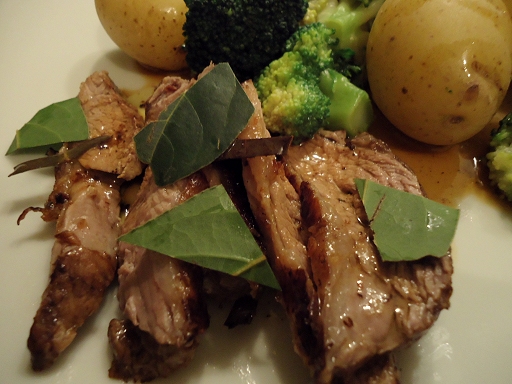 Butterflied leg of lamb with bay leaves and balsamic vinegar (recipe from "Nigellissima: Instant Italian Inspiration" by Nigella Lawson)
With two tasty lamb recipes from Nigella under my belt, I felt pretty confidant that this was going to go well. I really do like lamb, after all. The result, though, was nothing special. In fact, the first time I ate it, it seemed overly salty (I didn't have that problem on reheating the lamb though, so who knows what was going on there). Once again, the lamb came out nicely pink (it was so cold that day, that getting the lamb to room temperature before cooking was difficult, but my joint was a little smaller than Nigella's suggestion, so it all seemed to work out ok; also, you can't see the pinkness in this photo, but that's because I was eating the end of the joint here). But there was just something that wasn't amazing about this dish. It could have been the fact that the lamb had the skin on, and I normally find skin to be overly-rich for me, but I just couldn't taste the lamb itself as much as I wanted to. I mean, this dish was fine, sure, but it wasn't as great as I was expecting. (Plus, I had to majorly clean the oven afterwards because all that olive oil on the lamb went everywhere.) 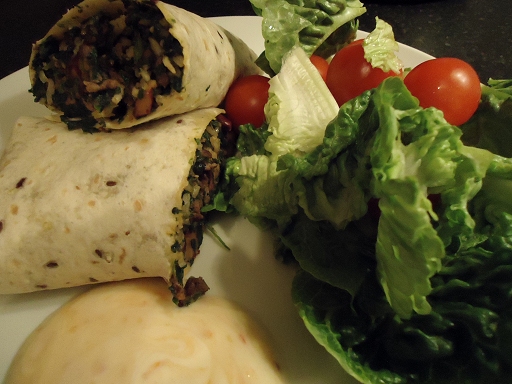 Beef and spinach burritos
This was my first ever attempt at making burritos. The taste of these was quite earthy with all the brown rice and spinach in there. On their own the burritos were ok, but nothing very exciting. But, man, that mixture of sweet chilli sauce with yoghurt is the best idea ever! Putting it on the burritos really made them sing. I bet it would make anything sing! In summary: ok dish; super great condiment. 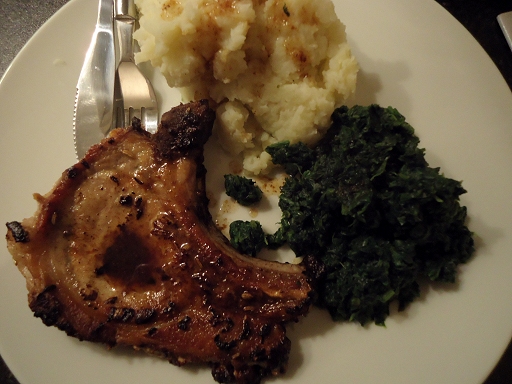 Pork chops with fennel seeds and allspice (recipe from "Nigellissima: Instant Italian Inspiration" by Nigella Lawson)
I've had such ups and downs with Nigella that I had no idea what to expect going into this one. I didn't add the Marsala that Nigella suggests, but I did add everything else. The mixture of the spices, with cloves in there too, sounded like it would be pretty old-school (like, you know, 17th Century old-school), and I know that pork chops aren't my favourite, because I prefer my pork in the cured variety. Intrigued, I gave it a go. AND I AM SO GLAD I DID. This dish is wonderful! You mix the spices with flour, which you use to cover the chops, and so when the chops are fried in the olive oil, the flour goes all crispy on the outside of them. When you bite into the crispy exterior, if you have a little fat underneath, the pork chop just melts in the mouth. Oh God oh God. And cooking it makes your kitchen smell wonderful (porky and spicey!) I was actually gnawing at the bones at the end of this one, because I wanted to eat up every little bit I could. Well done, Nigella. Well done.

I’m glad that you had some successes bab. I have the same thing when I try out new recipes. Some are nice. Some are bland. It’s the way of life.

And what have you got against marsala? I think you can take it.

The ups and downs of trying out a new recipe! It’s one of the things that makes it so exciting. This week I cooked a dish that I thought was going to be a full-on down (the cooking experience went from bad to worse) but when I tasted it, it turned out to be an up! More on that story in the next food post.

As for Marsala, I’m not that keen on buying a whole bottle of stuff that I’m never going to use up.