It's been ages since the last food post! Basically, for the last part of 2013 I didn't cook anything exciting at all. It was perhaps the hardest thing to give up during my studies. I'm so glad to be back on the cooking-wagon again :D 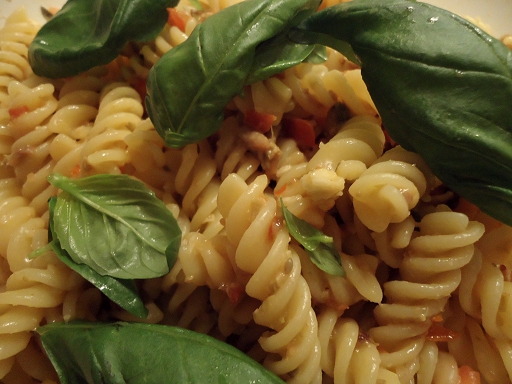 Sicilian pasta with tomatoes, garlic and almonds (recipe from Nigellissima: Instant Italian Inspiration by Nigella Lawson, which Claire got me for my birthday last year)
I made this in September, so apologies if my description is a little vague. This recipe, which is essentially a type of pesto, contains anchovies among other things. I'm not keen on anchovies so I wasn't sure if I would like this. But it was nice! It packs quite a punch with the flavours: tangy and sweet and basil-y. Just slightly too much on the sweet side for me though; there are sultanas in the pesto, and having sweet in my savoury is not something I'm good at. (Oh yeah, and Nigella said this dish works well with fusilli lunghi pasta. Could I find any in my supermarket? Not on your nellie!) 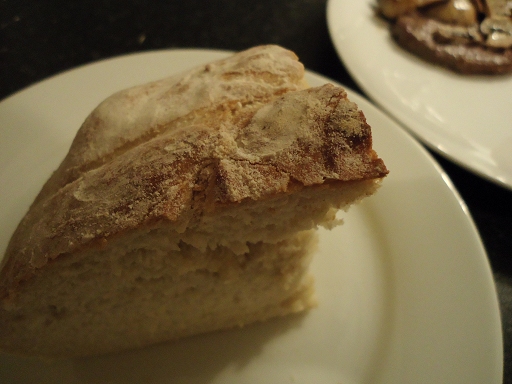 Farmhouse loaf
This was the very last thing I tried out last year before my course. Looks quite nice, doesn't it? Don't be fooled! It was horrible! Ok, so not horrible, but it definitely wasn't good bread. Problem one: I didn't get the rise I wanted. It can't have been down to my new yeast, so either I didn't prove the dough in a warm enough spot (possible) or my kneading technique lacks something (also possible). This was dense, claggy bread. Problem two: I didn't add enough salt so it didn't taste right either. Have you ever eaten bread without enough salt in? It's not a pleasant experience. 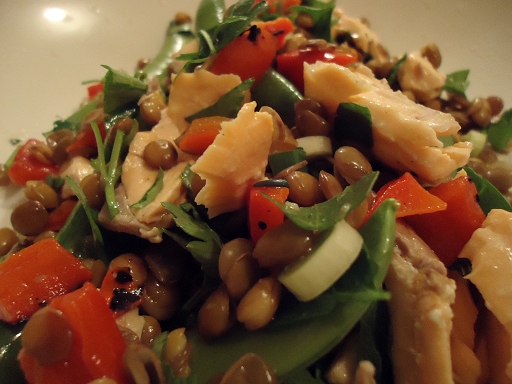 Lentil salad with flaked salmon and sugar snap peas
My first recipe tried out in 2014! This salad can be made with edamame beans instead of sugar snap peas, but I couldn't find any edamame for love nor money in my supermarket. Be that as it may, this was a real tasty salad. Tangy, sweet and punchy, and great for toning down the richness of the salmon. Super easy to make too. 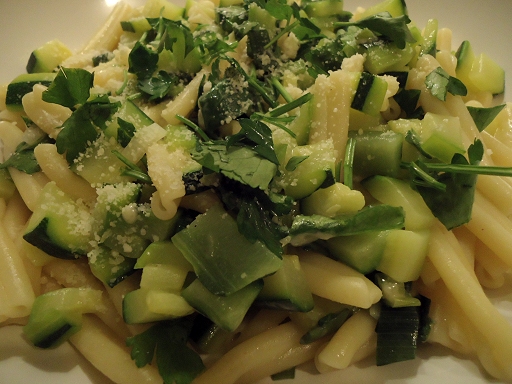 Pasta with courgettes (recipe from Nigellissima: Instant Italian Inspiration by Nigella Lawson)
I don't have cooking wine, so I left out the wine that's meant to be in this recipe. Perhaps the taste was lacking something because of that. Although, actually, I think I know what happened; I added too much water to my sauce, which meant that all the buttery, garlicky, cheesey goodness didn't really stick to my pasta very well. The result? It was a pleasant enough dish, but not super amazing. 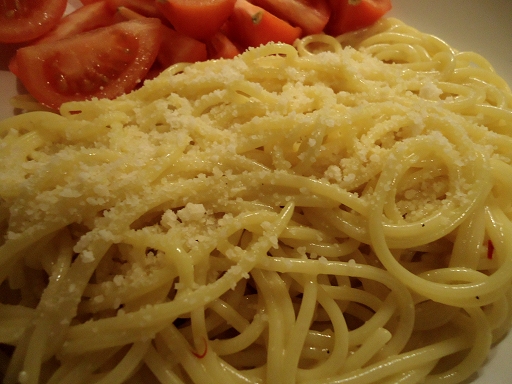 Yellow spaghetti (recipe from Nigellissima: Instant Italian Inspiration by Nigella Lawson)
Once again, I left the wine out of this recipe. Sorry, Nigella, but wine just isn't my bag. This recipe contains a raw egg in the sauce, amongst other ingredients, which you slather on the pasta just before serving. I wasn't too sure about that because eggs really aren't my favourite thing, especially not raw, slimy ones. Luckily though, this sauce wasn't that slimy and the eggy taste wasn't too noticeable either. In fact, the taste of this recipe reminded me of a nice carbonara without the bacon. Not too bad, but I think I'm still too squeamish about raw eggs to make this frequently.

Mushroom and parmesan risotto
We could call this block of recipes 'Janine cooks Italian food but leaves out the wine'. Here's another recipe where I did just that. I didn't find this dish lacking for it though. Oh man, I didn't. Let's get this first thing straight, shall we? I love risotto. I bloody love a good risotto. So this recipe was right up my street. I personally found that the taste of the dried mushrooms was a little too overpowering for my liking, but other than that, I would call this a super nice dish. If only risottos didn't take such multi-tasking to make. It's tiring stuff! 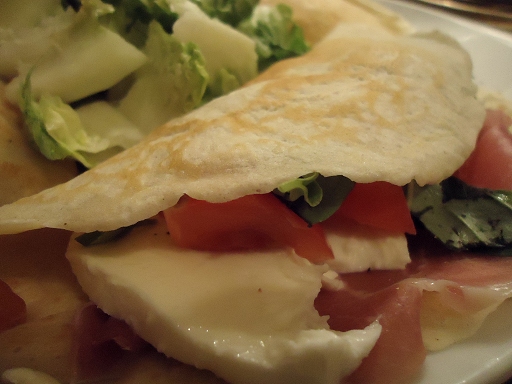 Pancakes filled with tomato, basil, mozarella and prosciutto (recipe for the pancakes taken from Sainsbury's Live Well for Less magazine, issue 2; and inspiration for the filling taken and modified from here)
Did you know that this is the first pancake day I decided to make pancakes all by myself? I've always found them a little daunting in the past, but I decided to buck my ideas up give it a go this time. The pancake recipe made loads of pancakes so I decided to have a savoury pancake course before moving onto the sweet. And this filling? It was really really nice. If I didn't find pancakes slightly too rich for me, I would have eaten loads of these. 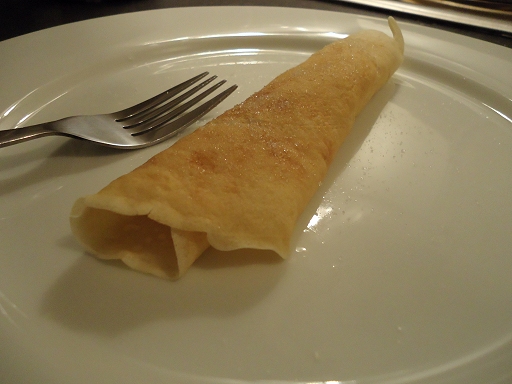 Pancakes with lemon and sugar (recipe for the pancakes taken from Sainsbury's Live Well for Less magazine, issue 2)
Same pancakes as above, but a sweet version. I've tried all sorts of combinations of chocolate and ice-cream and fruit with my pancakes in the past, but nothing beats lemon and sugar for me. Did I mention that I find pancakes slightly on the rich side? Lemon juice always cuts through that richness wonderfully. You may note that my plate is looking kinda empty here. There were initially meant to be more sweet pancakes, but what I learned that evening was that if you make enough pancakes to feed a family of four, surprisingly, one person can't eat them all in one sitting. 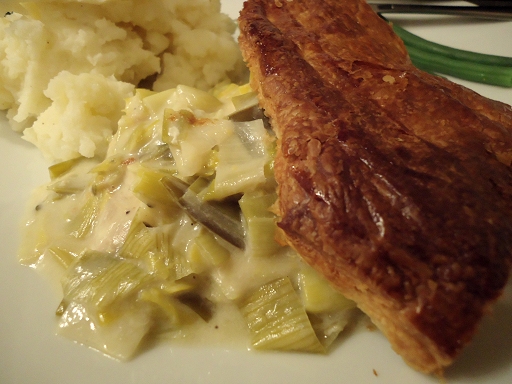 Chicken, leek and lemon pie
This recipe sounds nice but I think it's been given the wrong name. Instead it should be called 'lemon, lemon, lemon, lemon, lemon, with a bit of chicken and leek' pie. It's a really lemony pie! Once you get used to that though, it's kinda nice. And you do get the pride of having made a whole pie yourself, even if the pastry is shop-bought. We'll forget the part where the chicken didn't cook enough when boiling so I overcooked it and the leeks afterwards to make up for it; a minor inconvenience. 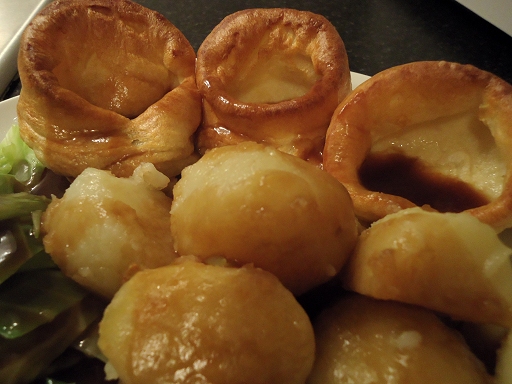 Yorkshire pudding
I'd never made Yorkshire puddings on their own before. Having now done so, I feel like I have passed some sort of test of adulthood. Well done me! Ok, so the rest of the roast was rather poorly done, but you win some you lose some. These Yorkshire puddings tasted like, well, like Yorkshire puddings. Some of them grew really massive; they took on a life of their own and started climbing out of the tins. I had to relegate the really sprawled, ugly ones to the fridge for later consumption. The one warning I would give about this recipe is that it says it feeds three people. The recipe makes TWELVE YORKSHIRE PUDDINGS (If you don't overfill the tins like I did). Unless you are going to eat four individual Yorshires with each dinner, you will have far more Yorkshire puddings than just feeds three. You can see from this photo that I tried to eat three Yorkshire puddings in one sitting. I was very full after that sitting.

Sorry to hear about your Yorkshire difficulties. If it helps, I’m pretty sure that when I was younger my Mum used to make Yorkshire puddings and pancakes (i.e. crepes) from the same batter. So you could always attempt both at the same time if you ever feel up to it!
(Although, to be honest, torn-up envelopes in gravy is pretty much what Yorkshire puddings are supposed to taste like.)

As for risotto, sometimes I like to cheat loads and just throw some cooked long-grain rice into some fried onions and bacon and stir. Nothing like a real risotto, but still tasty if I don’t have much time (and I have just discovered that my supermarket now sell American-style bacon, which makes me so happy).

FOOD POST! Everything looks really good, especially the pasta and the mushroom risotto (sometimes I make lazy risotto with frozen rice, vegetable broth, butter, and parmesan cheese, because: lazy). A long time ago I made Yorkshire puddings with prime rib, and I overcooked the meat and forgot to season the puddings and it tasted like seared fatty shoe with torn-up mailing envelopes in gravy. Sad story.

Also: I would call those pancakes “crepes"! They look very tasty, though. I’ve never eaten them with sugar and lemon. If I ever find that I am workbrickle enough to make crepes, I will definitely try that myself.