I spent this weekend at my cousin Jack's wedding. We didn't go to the actual ceremony, which was a very small affair, but we were invited to the large family dinner and dancing the day afterwards.

The most exciting part of the whole thing was the wedding cake. Here's a photo of it: 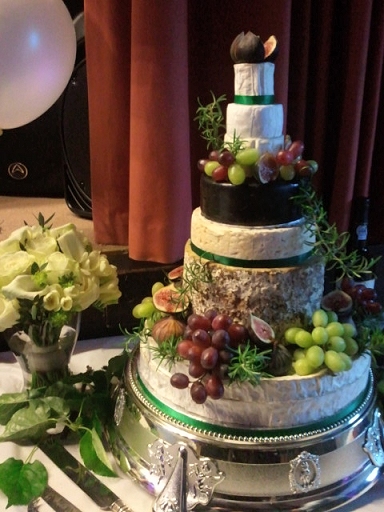 I think I may be very uncultured here, but I've never seen anything like it before :O

Now, I do like me some cheeses. Unfortunately, I don't like blue cheese, and the blue cheeses in this cake were so strong that all the other cheeses got tainted by it. Even the brie :(

That doesn't matter though. Look at it! Go on!

In other news: I tend to consume historical-type stuff on a very frequent basis. Here are a couple of my recent favourites.

The thing is: Roman stuff bores me. My parents go crazy over it but I've never managed to muster up the interest.

I think I have realised why. All the Roman stuff you come across here in the UK is either small country villas, military barracks, or if you're lucky, a bath house. And once you've seen one, it almost feels like you've seen it all. Oh look, underfloor heating. Woo :| Half of a mosiac :| :| This random lump in the grass used to be a temple :| :| :|

The UK was very much an outpost and you get the feeling that things were slightly cobbled together by the Romano-British people trying to live it up all posh like the Romans while actually living somewhere very far away and widely unimportant.

But! This show by Mary Beard! It's not about your everyday British Romans at all. It's about Rome! And not just about politics either but about the everyday lives of normal Roman people, living in the hustle and bustle of the largest city in the world (and there were a million people in that city, guys. That's huge for its time.)

Turns out, Romans in Rome are bloody exciting! The picture she paints is not of an orderly city but of a massive, rambling place that's filthy and noisy and alive, growing almost organically, and far closer to a shambolic medieval city than to the wide, spacious, clean cities of today.

I've got one more episode left to watch. I'm going to watch it with this expression :DDDD

And then I'm going to wish I can go back to Rome on holiday at some point because it is so pretty and so old and the ice-cream is so good.

The Time Traveller's Guide to Medieval England: A Handbook for Visitors to the Fourteenth Century
I didn't mean to read this book, guys. I didn't plan it. What happened was that sneaky Amazon sent me one of those 'You bought this and other people that bought this also bought this other thing, and we thought that if you liked that then you might like this other thing go on buy it go on go on' emails. I fell for it like a kipper. The title looked interesting, so I clicked through to the Amazon page, and then I read the extensive preview chapter, and then I realised that I wouldn't be able to live without this book in my life so I bought the ebook immediately and consumed it over the course of one weekend.

What's good about this book is exactly what's good about the Roman programme I've just talked about, only better. It's about everyday life in medieval England and what it would be like to live there. But not only that; it's written in a very vivid way. The author goes out of his way to describe things with a level of detail that is normally only reserved for fiction. You end up almost feeling like you're there.

From where to stay and what to wear and where to go and what to eat, this book pretends that you are going to visit medieval England and basically tells you what to expect when you arrive.

Let me give you an excerpt:

"It is the cathedral which you will see first. As you journey along the road you come to a break in the trees and there it is, massive and magnificent, cresting the hilltop in the morning sun. Despite the wooden scaffolding at its west end, the long 80ft high, pointed lead roof, with its flying buttresses and colossal towers, is simply the wonder of the region. It is hundreds of times bigger than every other building around it, and dwarfs the stone walls which surround the city. The hundreds of houses appear tiny, all at chaotic angles, and of different shades and hues, as if they were so many stones at the bottom of a stream flowing around the great boulder of the cathedral. The thirty churches - though their low stumpy towers stand out from the mass of roofs - seem humble by comparison."

For a weekend, I was almost there.

If you like history and you like medieval stuff, then go check out the preview pages on Amazon. Go on go on go on. It's fascinating.

The same author has written a similar book about Elizabethan England, which I will doubtless read at some point, but I know less about medieval stuff so I decided to pick up this one first :D

I’m still quite confused about the different e-readers and still uncertain if I want one or not. I think I’ll have to try out my Mum’s new Kindle when I can get a chance.

hey, i stole…er, i mean borrowed a Kobo e-reader from my boyfriend, it’s a great little device. I like that it’s lighter than my nook but it doesn’t have color :p

I think I’ve been so spoiled with this ‘cake’ that any wedding cake I see after this will be a disappointment. Give my apologies to Tran and Heave.

I bought the ebook from Kobo, which meant it was a format that I could only read on a special Kobo app or Adobe reader. Annoying. Still, the Kobo app was free for my phone and not very difficult to use.

That “cake” is crazy. Have also never seen anything like it.