So, I was just watching an old episode of Mock the Week on the BBC iPlayer. One of the panelists was the Irish comedian, Ed Byrne. I haven't seen him on the telly for ages, but there he was, and I suddenly had the realisation that he looked a bit like someone. 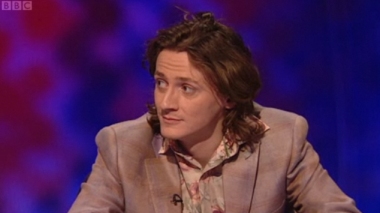 Lockon, is that you?

But maybe I'm just going crazy because it's Gundam-day and I still haven't watched episode 4 yet D:

And this is the part where I go on to say just how much I love the BBC iPlayer. I forget it exists, so I don't watch it enough, but I think it's great. No more having to sit through boring shows, I get to watch something that's interesting whenever I want. Golly, it's just like the rest of the internet, only legal d^_^