So it seems that the Gundam00 merchandise machine has given us a halloween picture! Hahaha; so Lockon's been drinking again? It sure looks like it. Also worthy of note is the fact that Tieria is actually WEARING A DRESS, but despite this fact, he still insists on wearing that damn cardigan underneath. Oh Tieria, will you ever learn? I think he needs an appointment with Trinny and Susanna.

So, I was a little disappointed with this episode; mostly because I had already found out about Lockon being alive and getting an eyepatch, so I wasn't so excited about that. And Lockon's post-trauma talk with Tieria wasn't quite how I'd hoped it would be.

Mostly, there was no hug. TIERIA NEEDS A HUG! Why wasn't there a hug??

So, let's run down the Lockon/Tieria moments in this episode:

1. Lockon refuses to have his eye treated because, he says, he doesn't want to make Tieria worried by staying in intensive care for too long.
2. Tieria spends the whole episode staring out into space and moping. He also cries because he's worried and feeling guilty about Lockon, which is adorable.
3. Tieria, for the first time ever, admits to himself that an actual person (Lockon of course) is more important than his beloved Veda.
4. Tieria, also for the first time ever, APOLOGISES. It's a big step for him. And obviously it's Lockon he apologises to (in this tiny tiny voice).
5. OK so he's been doing it for at least the past two episodes now, but Tieria keeps calling Lockon 'anata' (which, in Japanese, is a word for 'you', but is much more intimate than the translation suggests, and not really something that I'd ever had imagined Tieria calling anybody). 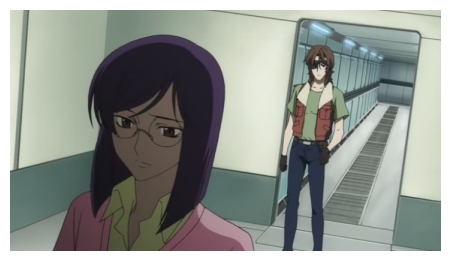 So mostly, everything was from Tieria's side this week, which is a bit disappointing. What I had been wanting, aside from a hug, was for a bit more reassurance from Lockon. I mean, sure, he tells Tieria that he doesn't need Veda to keep fighting so stop worrying about it, but it didn't really feel like enough. He accepts Tieria's apology with a 'well, you're human, you're bound to make mistakes now and then', rather than with a 'no, it was my fault, because I chose to risk my life to protect you', which really means that Tieria's going to keep blaming himself for what happened, when it wasn't really his fault at all.

Anyway, Lockon comes across as being a bit brash and a bit of an arse all episode. I'm not quite sure what to make of it; he comes across as being very manipulative all of a sudden, and it's not something that we've really seen before. Throughout the episode you can see him, effectively, pulling all the strings to try to make everybody get out there and start fighting again as soon as possible. I'm wondering why he's suddenly become so proactive. There could be two reasons:
a) Being in a life-threatening situation has given him a new sense of urgency to finish what they've started before they all die.
b) He's got some ulterior motive, that we've yet to find out.

And suddenly I'm suspicious because:
- why and how does Lockon know everybody else's secrets that no-one else knows?
- what really is the deal with him and his twin brother?
- no-one ever suspects the nice ones

So um, I am full of paranoia now, but mostly I think it's just because Lockon thinks that getting everybody back fighting in giant robots is more important than HUGS TIEM.

But Lockon's eyepatch is testimony to the fact that he cares enough about Tieria to risk his life for him, and Tieria is slowly working his way towards the conclusion that Lockon is important to him. (And I have to say that Tieria's personal growth and slow understanding of 'what makes humans tick' is a joy to watch. Tieria <3)

2/3 of Trinity die. I'm not sad at all. I didn't like Trinity because they were introduced once I'd gotten attached to the original characters, and then they were nasty to everyone. The only thing I'm sad about is that they didn't kill Nena off too.
Also, I love it that Ali was the one to kill them. Ali is a brilliant villain. You love to hate him, or just love him, really. I wish I knew what his motives are, because I'm sure there's more to it than just 'I LOVE WAR!!!!!1'

Also, Alejandro finally shows himself to be one of the badguys too. I wasn't sure if he was one or not (and I'm still not sure to by honest), but if shooting an old guy in the head about 10 times and laughing about it for a full five minutes non-stop isn't something a badguy would do, then I don't know what is.

Gundam00 aside: Oh my, I've got so much work to do today and I haven't even started. *panic panic panic*