Hi! I said I owed you a massive Christmas post, so here it is.

I hope you all had a good Christmas and a happy new year! Mine was good, although it was subdued a little due to two deaths in my extended extended family. I only met them both once or twice and they both had good innings at around 80 years old, but it still hit a lot of my family quite hard. It just goes to show how important it is to have a celebration at this time of year. You can only imagine what it must have been like thousands of years ago when these traditions first started. Winter is hard as anything, so it's good to have something to look forward to. Christmas and other mid-winter festivals are basically humanity's way of saying 'Keep Calm and Carry On'.

For me, this year, Christmas started when Nick, Steve and Heather came to London and we all stayed with James and Eppa for some fun times.

On one of the days, we went on a nice walk through South East London. It was meant to be a 'transport tour' but this is the only piece of transport we encountered all day. 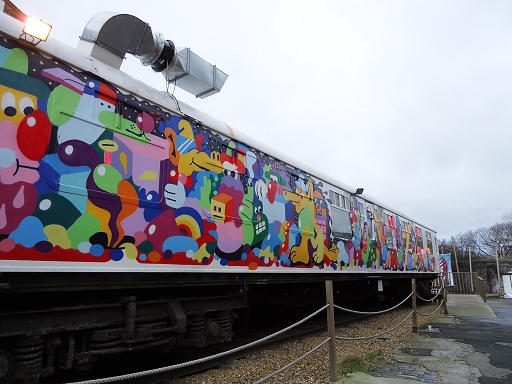 It's a train carriage and also a cafe. Apparently. After walking all the way to Deptford to find it, we realised that the cafe was closed for the day. Also, the weather was rainy and horrible and we had some really disappointing soup in another cafe, but other than that it was really good, guys! 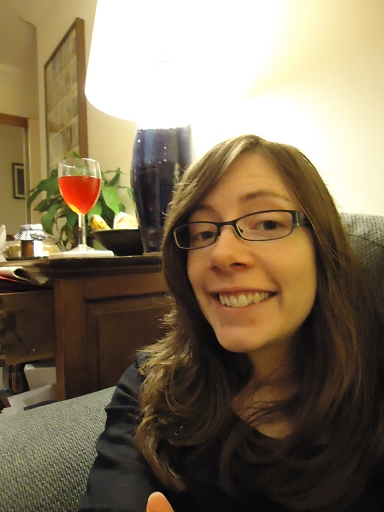 Chilling in James and Eppa's place afterwards. We all drank lots of cranberry juice because apparently it's healthy for your fanny.

Then we had a cheese evening. 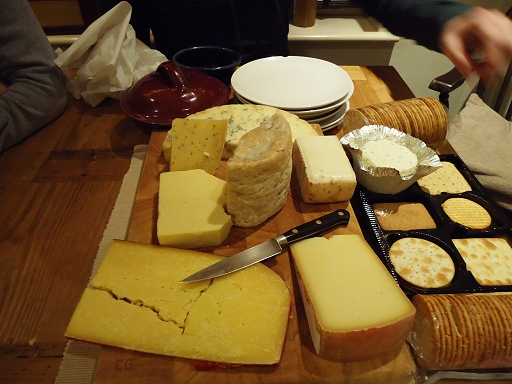 Here's the spread. Quite impressive, I think you'll agree. What this photo doesn't show is the pièce de résistance, which was a Camembert that had been baked in the oven. Dipping apple slices into that was heavenly. I still think back on it with fond memories. 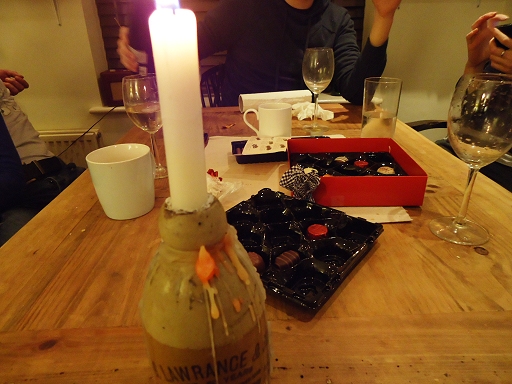 The remains, once we'd gorged ourselves.

Post-cheese, there was much karaoke-ing. This was massively fun for Nick and I, and massively annoying for everyone else. (Sorry guys, but I was having too much fun to shut up.)

Then, somehow, it was Christmas eve. I packed up all my stuff and took the train back to my home-town to go stay with my parents for a week.

It was nice to be back. After moving out of my home-town earlier this year, I hadn't been to visit for about 4 months. I got to catch up with some old work friends too, which was good.

Also, there was much visiting of family. I have a pretty large family of various grandparents and aunts and uncles and cousins, so this took up a fair amount of time. One of the days involved a family walk through the cold countryside. 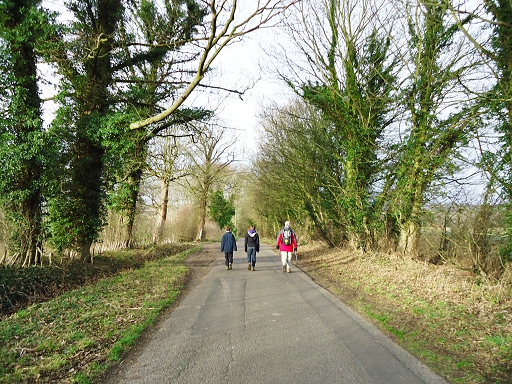 My Granddad (on my Mum's side) with two of my cousins. 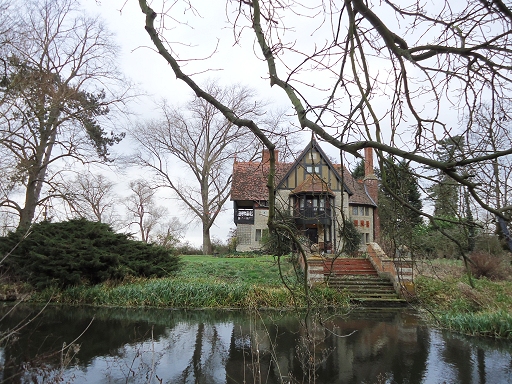 This house that we came across looked rather fabulous. I loved the way those steps suddenly stop at the water. I don't know if the water is meant to come up that far, but I think it gives the place a rather run-down, romantic look.

The rest of the time at home was spent with my parents watching a glut of Christmas TV. Some of the highlights included:
- Tony Robinson's Gods and Monsters - This was a little unnecessary in parts (like forcing Tony to sit in a bath of entrails in order to imagine what it would have been like for some Celts) but it was still interesting. I love learning about old folklores and customs. The part about corpse mutilation to stop bodies coming back from the dead was particularly fascinating.
- Great Expectations - This new adaptation from the BBC was really good. I read the book a couple of years ago and I think it was captured very well and very faithfully here. It's a great story. Oh, and it looked gorgeous too. There's not much I like better on my screen than some old-school costumes. Ohoho.
- Royal Institution Christmas Lectures - I watch these every year with my parents. Despite the fact that they're aimed at children, they are always interesting for a more mature audience as well. This year we learnt a little about how brains work. Brilliant.
- Still Ringing After All These Years: A Short History of Bells - Ok. So I watched this one slightly before Christmas, but I want to talk about it anyway. Over the past year or so, I have come to realise that anything presented by Richard Taylor will be fascinating. This show was no exception. A history of bells might not be everyone's cup of tea, but it was mine. He talked about how bells used to serve a very religious purpose before gaining other uses, so they're still seen as being quite mystical. And their magical properties are so ingrained in our culture that, even today, if you hear a lone bell tolling it can be really quite spooky.

There were more programmes, of course, like Downton Abbey and Doctor Who and something about some sort of private detective and his doctor friend having adventures across London (I forget the name) but if I listed everything I watched over the Christmas period, we'd be here for hours.

Christmas over, I headed back to London for New Year's Eve. I'm afraid I didn't take any photos of this, so you're going to have to put up with text text text :D

I went to see Deborah, and together with a large number of her friends, we went to the flat of another of her friends in Dalston. The flat was new and really nice. As a bonus, it had a roof terrace, which meant that we all piled out there to watch the fireworks at midnight. It was a great view, but we came to discover that there are problems with being so high up on New Year's Eve. Namely, flying Chinese lanterns. I didn't realise they were dangerous until we had a run in with two of them. If the night is slightly windy, they don't just go straight up, they also go across and down and all over the place. One came careering right towards my head D: If I was a couple of inches taller I think I could have some nasty burns right now. Of course, it's only after the event that you stop and think, 'Hold on, that was actually quite dangerous'. At the time, I was fine. After midnight we headed back down into the flat and celebrated the new year with some 90s dance tunes. (As you do when you're well into the second decade of the 21st century. We're so down with the kids. Rock on.)

Incidentally, you know those times when you instigate a huge Whigfield dance-off only to realise, after a few minutes, that only two of you are dancing and everybody else is watching with a vague mix of admiration and horror? What do you do??? Keep on dancing until the speakers break! That's what you do!

Once again, Maryia outdid herself with a parcel of lovely things. Here are just a couple of them: 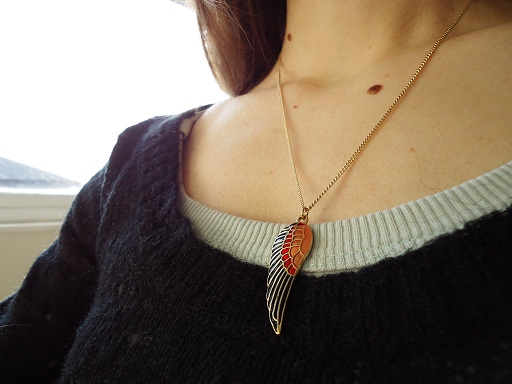 This necklace is quite rock-chick, I think. I like to wear it with my big leather belt and some knee-high boots. 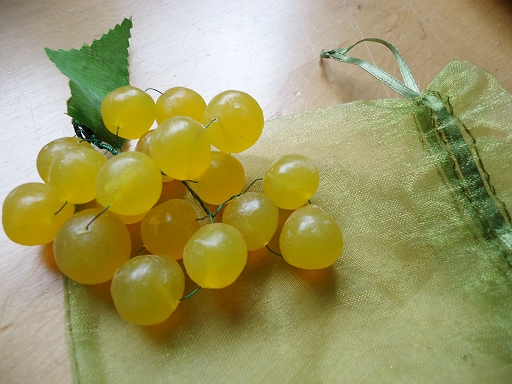 This is lots of fun. It looks like a bunch of grapes but they're actually made of soap! Very cute, and they smell lovely too. 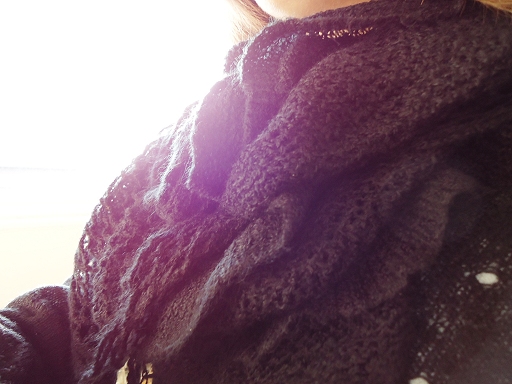 This may look like a big, black scarf, but it is, in fact, a snood. I love it to pieces. It's warm and looks great and I've already worn it more times than I can count. 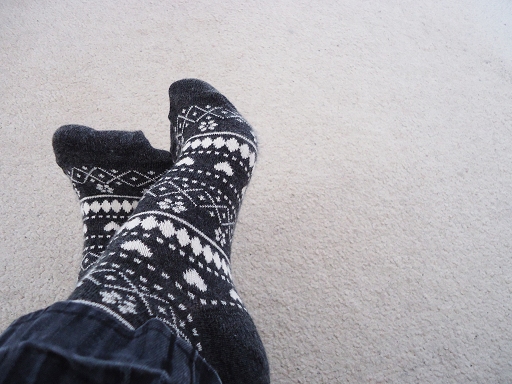 Who's rocking the house with Sarah Lund inspired socks? I am! Seriously, I am going to solve so many crimes in these socks. Watch me go! 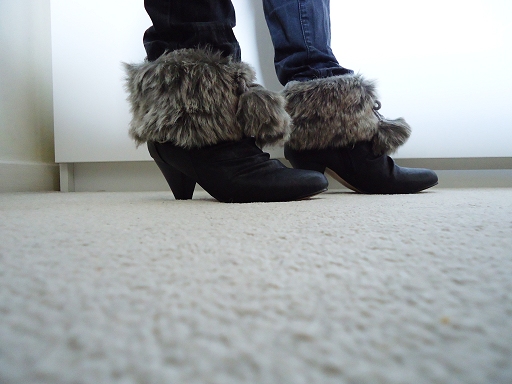 I bought these boots in the new year sales, but they're not what I want to show off. Those fluffy bits on top? They're detachable! Another present from my parents, these. They fit on any boots and instantly make them five times more fabulous. 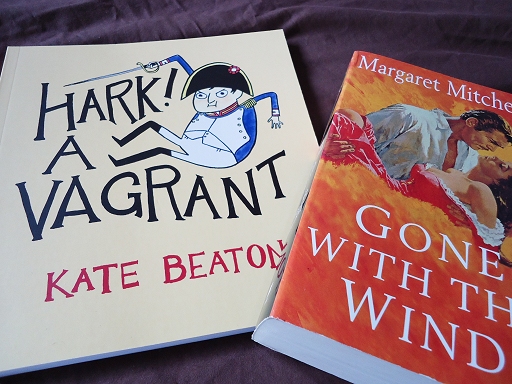 In other news, I got some books! I've never read Gone With the Wind or seen the film, so that should be something to look forward to (I'm assuming it's good otherwise it wouldn't be so famous).

The Hark a Vagrant book is possibly one of my most favourite things right now. Jokes and history and comics = all my favourite things! I particularly enjoy the Nancy Drew comics. This Nancy will stop at nothing to solve mysteries, even if they're all in her head. I love how, with each set of comics, Nancy grows more delusional.

So, that's it. The first week back at work is over, and it's already getting stressful! But that doesn't matter, because there are good things too. Like arranging a holiday to go to Frankfurt later in the year (so excited!) and more Sherlock and a literal video version of The Hobbit trailer and this: 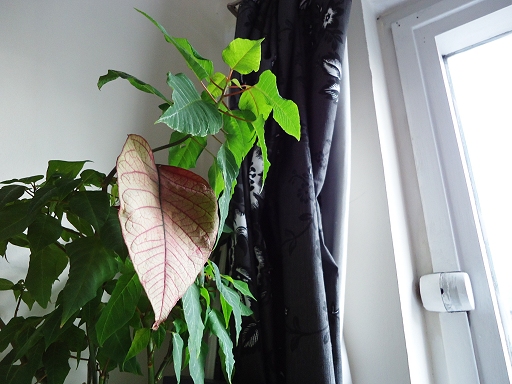 This is my poinsettia. I bought it for Christmas last year. They normally only last for about a month, and any plants in my care normally last less than that. But look! It's still going! It's about a year and a month old and it's still alive! It even survived the move to London :D

Maybe we can go crazy and use them when you are over.
No.

I was telling somebody (maybe you) how Chinese lanterns are BANNED in Germany. Apparently they brought down a plan or something. I have two in my flat though. Maybe we can go crazy and use them when you are over.

That snood is sexy, but everything is topped by those fur things for boots! That is some crazy, funky shit!!!