Do you remember I said that a load of people were going to rickroll Liverpool Street Station yesterday? Well, they did it. If you're looking for a better video, because the one on the bbc is pretty rubbish: this is the only one with good audio that I could find, and this montage captures the event quite nicely. It looks like it was pretty fun; I'm almost sad that I was too lazy to go along.
Oh, and I love the quote in the BBC article from the policewoman:
"We monitored the incident. There were no problems, no arrests. They did what they had to do and then left."
Hahaha. Sounds like someone didn't like getting rickrolled!

The whole thing amuses me no end. The power of an internet meme to bring so many people together for such a strange purpose is both exciting and utterly terrifying. God I love the internet.

In short Gundam00 news, because I have to talk about it, even if the show is over for the moment. It seems that there is plenty of information circulating about Tieria at the moment.

Interesting point I: He wears glasses to protect his eyes, which he needs to access Veda.
Well, that makes sense I suppose. Tieria's glasses always confused me a lot, because, as I became more and more sure that he'd been engineered in some way, I couldn't understand why they would engineer him with bad eyesight. So, the question now is: was he genetically engineered, or built from technological components? Hmm. But there's no way that I believe he was born and raised in the normal way.

Leading on from that:
Interesting point II: He has a birthday, which is in December, and a blood type (which I forget).
So, he does have blood in there at least. I get the feeling that, despite all the computery hints, he must be mostly human in his make-up. After all, Lockon kept insisting that he was human like the rest of them, and Lockon seemed to know. And birthday: is that the day he was born, or just switched on? Haha. No clues on an age though. I like to think that his age is much younger than we would think. He doesn't seem settled like a person that has had time to grow up and learn about the world and about people. I'm thinking he's around 4 years old or something. Am I crazy?

Interesting point III: He has gained weight (2kg) during the series.
I have no idea what this means. Someone mentioned that maybe he has grown breasts? OMG. I'm not sure I like the sound of that. I mean, I don't mind if Tieria turns out to be female, but there's no way he's allowed to have bigger boobs than me. Don't make me jealous T-chan!

Hmmm...at the moment I seem to be spending about 85% of the time thinking about Gundam00 and 0.5% of the time doing my coursework. (The other 14.5% is taken up with eating and dancing to The Twelves' remixes. Not at the same time, I might add.)

Anyway let's talk about Tsubasa chapter 187. Not really spoilers (it's the splash page) but I'll hide it anyway.

Golly I haven't talked about Tsubasa in ages! Don't worry, I'm still following it, but it hasn't captured my imagination recently. (I think it's a case of Fay not being the center of attention anymore, and the complete lack of Subaru showing up for ages.)

Anyway, the splash page for chapter 187 nearly remedied that. 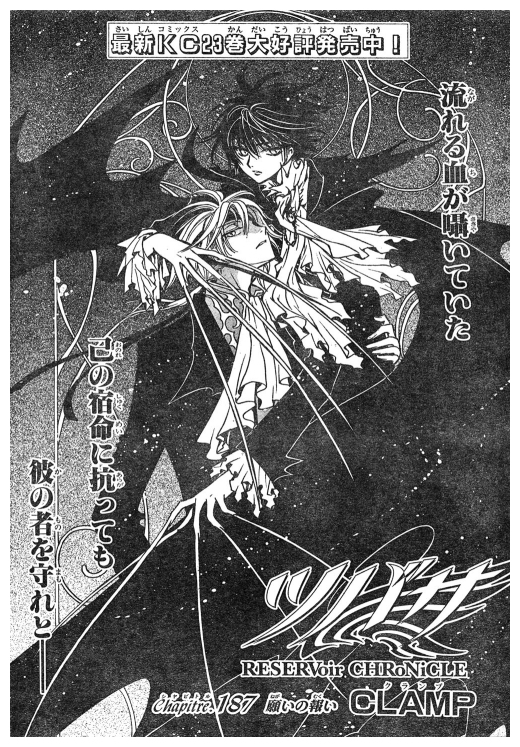 OMG. Fay! And Kamui! Good lord, what a beautiful illustration. I can't stop staring at it. All they'd need to do is throw an Ashura in there and asdfgasdfgasdfgfs I don't know what I'd do with myself.
And I love how the nails of Kamui's lower hand look like the finger bones in bats' wings. I wonder if they did it on purpose? Everything CLAMP does is on purpose.