I'm going to start this post with a heads up: I might not be around much for the next few months. I'm going to be doing some extracurricular work stuff, which is going to take up a lot of my time, so don't be surprised if things around here get a little slow (slower than normal, that is). At the moment I don't know how long it'll take, but I should be back to normal come autumn at the latest.

For now though, it's food post time! Because I have so many food photos that it's getting ridiculous. 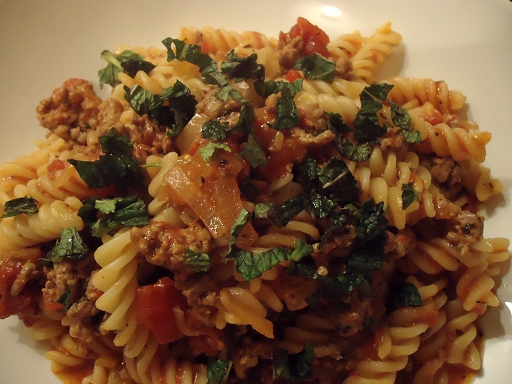 Pasta with lamb ragù (recipe from Nigellissima: Instant Italian Inspiration by Nigella Lawson)
This recipe was meant to be made with mafaldine or pappardelle pasta. I couldn't find either so I made do with the fusilli I had in my cupboard. But the shape of the pasta doesn't really matter because this recipe is gorgeous! It's the first recipe from this Nigella cookbook that I've really enjoyed. Lamb is lovely anyway, as is lamb and mint, and when you add in the sweet tomato sauce. Oh man. I could happily eat loads of this. Note to self: make it again sometime. 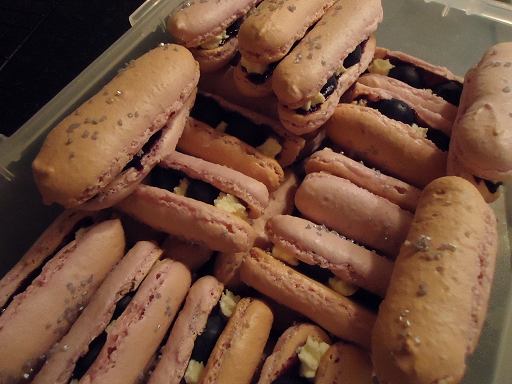 Blueberry & vanilla macarons (recipe from Mother's Little Book of Home-Baked Treats)
Once again I have discovered that macarons are not for the faint-hearted. At so many points did I think 'oh wow, this recipe needs a skill-set that I just don't possess'. But the only way to learn is to practice! The recipe called for purple sugar sprinkles. I could only find blue (I wanted gluten-free sprinkles so a colleague of mine could eat them). The colour of the sprinkles was the least of my worries, though.
1. Keep an eye on your macarons in the oven. The recipe says bake for 10 minutes at 170°C but I found that my macarons were turning from purple to brown in about 8 minutes. Oops. Macarons really aren't meant to be brown, and with the purple food-colouring added in, you get the strange pink colour that you can see in this photo.
2. The recipe calls on you to make your own blueberry jam. Mine wasn't anyway near thick enough.
3. The vanilla cream didn't go well. I over-whipped mine and then didn't pipe enough of it onto the macaron shells, which meant that none of the shells stayed sandwiched together. Also, I had to prepare these the night before, because I wouldn't have had time in the morning, which meant that my cream had kind of dried out by the time I took them into work. They didn't look the most appetising.
But! All problems aside, these tasted really nice! The sharpness of the fresh blueberries works great against the sweetness of the macarons. Oh, and unlike the last time I made macarons, the texture of these came out right: soft but a little crispy on the outside. The recipe said it made about 20 macarons; I got 30-ish out of the mixture. And when you consider how much macarons cost to buy in a shop, having a box of 30 macarons makes you feel proud no matter how they look. All in all, I'd count this as a success. And hopefully my next attempt will be even better. 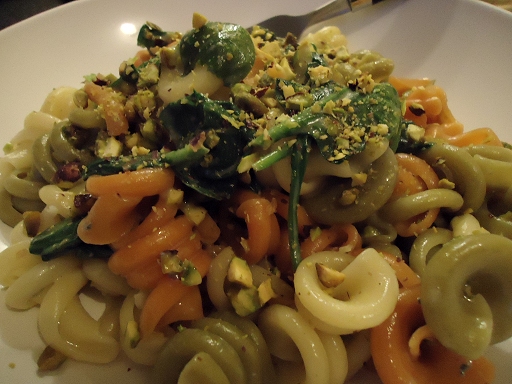 Tricolore pasta with blue cheese (recipe from Nigellissima: Instant Italian Inspiration by Nigella Lawson)
This recipe was meant to have all-green trottole pasta but I could only find the tricolore version. What can you do. Other than that, I don't think I liked this recipe so much. Granted, I liked it more than I thought I would. I am not a blue cheese fan, but the Gorgonzola piccante in the sauce just tasted cheesey rather than too tart and stinky. But, with the 125g of pasta per person, this is a massive portion. Far more than I can stomach. The pistachios are rich, the cheesey pasta is super-filling and the spinach is just sour. Hm. Edible, but not great. 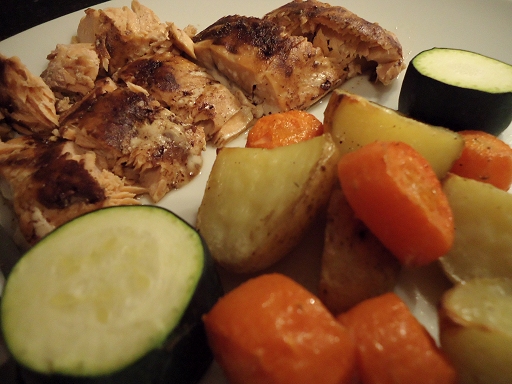 Maple-glazed roast salmon
I couldn't find a 1kg side of salmon, so instead I roasted a load of salmon fillets together. I also wasn't sure that they were defrosted properly when I put them in the oven so I made sure to cook them for longer. What I'm saying is that I'm pretty sure my salmon was overcooked and dry because of it, but personally I don't really mind that. Overall, the sweet glaze made the salmon taste really nice. My only problem was that 300g of potatoes between four people makes for a very small portion size; at least, I think so. More potatoes please. 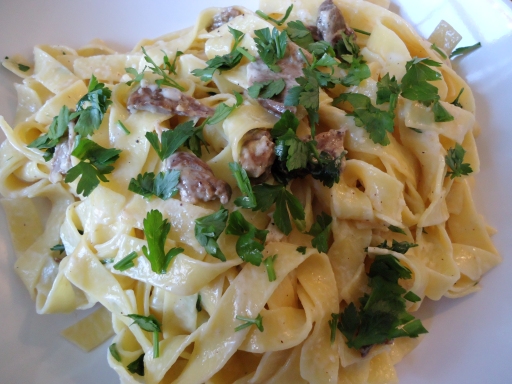 Fettuccine with mushrooms and mascarpone (recipe from Nigellissima: Instant Italian Inspiration by Nigella Lawson)
This recipe was meant to include marsala, but I didn't add it in because that's my bag. As a result, I think the taste was missing something. In my opinion, it was a nice dish, but not amazing. Dried mushrooms aren't my favourite thing in the world, and once again Nigella hits you with 125g pasta per person. That's really too much for my stomach. I felt bloated all evening. 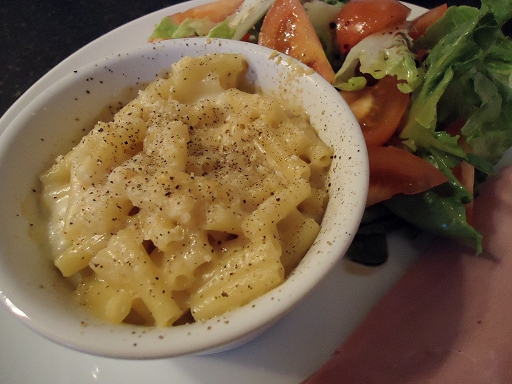 Mini macaroni cheese all'Italiana (recipe from Nigellissima: Instant Italian Inspiration by Nigella Lawson)
And once again, I didn't add the vermouth to this recipe. This time, though I don't think I lost too much. Also, Nigella recommended using pennette or chifferi pasta and using freshly ground white pepper on top. I couldn't find any of that so I used macaroni and freshly ground black pepper instead, but I really don't think it made much of a difference. Now, let me confess: I don't really like macaroni cheese. It's very rich and I normally find trudging my way through a bowl of it to be hard going. This recipe though. This recipe! Nigella has got another gem here. Not only was this macaroni cheese nice. It was gorgeous! Firstly, I think the vegetable stock and truffle oil (I had no idea what that tasted like until I tried this dish. I'm a convert. Does this make me middle class now?) both those ingredients really lift the cheese sauce and make it sing. The four different cheeses give a great rounded taste and the chewy mozarella balls hiding amongst the pasta are a delight. I literally can't praise this recipe enough. I'll be making it for Eppa and James this week because I need to eat it again. (Literally the only problem was that I managed to chip once of my new ramekins when washing it up afterwards. Boo.) Oh yeah, I just remembered. I accidentally added twice as much pasta here as the recipe says to, but I think it worked much better that way. With less pasta the portion size is really small and the sauce is too runny. Sometimes accidents can work in your favour! 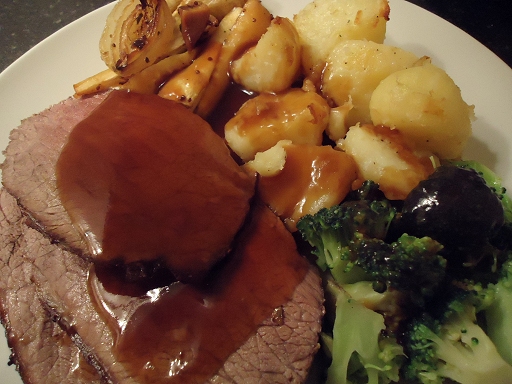 Roast beef with root vegetables
I don't think there was anything about this dish that I enjoyed! The major problem was my fault. I have learnt a big lesson, which is: pay attention to what cuts of meat the recipe asks for. This recipe called for topside beef but I used silverside. I thought it would be the same thing! It wasn't the same thing. Oh God. Silverside should never be eaten medium. The whole thing was tough as old boots! So chewy! I couldn't eat all the meat I'd served here because my jaw got tired half-way through the meal. Oh dear oh dear oh dear. The other faults were as follows:
1. The recipe calls for Elfe potatoes, which I couldn't find (I don't even know what they are) so I used normal white roasters instead and chopped them into roast potato-sized chunks. Whether this was the reason or not, I don't know, but the roast potatoes didn't come out crispy. That always makes me sad :(
2. The honey mustard glaze on the parsnips was far too sweet. Who ever thought putting honey on parsnips was a good idea?
3. The butter and lemon on the broccoli was too rich and just didn't go with the rest of the meal at all.
Overall, this was pretty much a disaster. 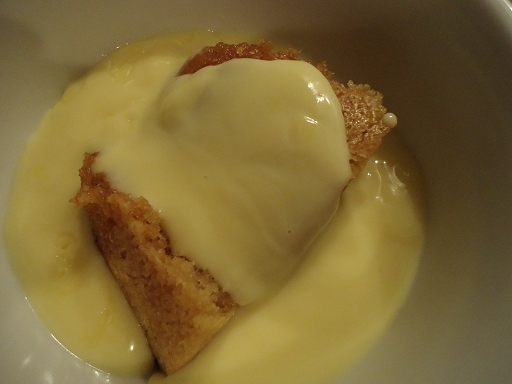 Steamed treacle sponge and proper custard (recipes came with a pudding bowl and jug set that I was given for my birthday last year)
This felt so old-school! I'd never made a steamed pudding or custard before (not even instant custard). Puddings are something that my Mum makes all the time (she doesn't make proper custard though) so I felt like a real grown-up for making these. And how exciting is steaming a pudding? I was terrified that the pan was going to boil dry in the 1hr 45min the pudding had to cook, so I kept running into the kitchen and looking at it. As for the custard, can you say 'scary'? Custard is so scary to make! But mine seemed to turn out ok, with only very minor lumps. (Proper custard is hard work to reheat the next day though; a bain-marie? Give me strength!) The proof of the pudding though, as they say, is in the eating. This pudding was nice, but nothing to write home about. And the custard itself was a little too eggy for my liking. I'm not a fan of eggs, really, and, ok, I'm a Philistine, but my Mum always makes instant custard and that's the version I like. Also, I found that the sponge was a lot tastier the next day after a reheat in the microwave to make the outside crunchy and chewy. I'm sorry; my Mum normally has batches of sponge puddings in the freezer so I've pretty much only ever eaten them reheated in the microwave; to my mind, that's how they're supposed to be. Don't look at me like that.
Overall verdict? These recipes were nice enough, but were a bit too much like hard work for me to want to make them again.

Oh boy, these were some lows! I’ve had another low recently. You’ll have to find out about that in the next food post.

Truffle oil has a very strong smell and taste, so I only use a couple of drops at a time. You could say that it tastes like a savoury, garlicky mushroom. But, to be honest, I’ve worked out what it tastes like: the slightly sour tang of car exhaust. BUT IN A GOOD WAY. It went really nicely with the macaroni cheese so I reckon it’d go well in other cheese sauces. As for other stuff it goes with, idk man, I’m still working it out.

Oh janny, you middle-class foodie. Is nice to see that I’m not the only person to have cooking highs and lows.

I’ve never cooked with truffle oil though. What kind of recipes would you recommend it for? I saw it being criticised on some restaurant show for not being real truffle, but real truffle is upper class. Got to work our way up there.