Here we go with another food post. It's taken me a long time to cook enough dishes to blog about, which has a lot to do with my summer being up and down (as you will have discovered from the last two posts). But it is also because I have been working my way through another jar of Thai shrimp paste instead of cooking new recipes. (Why more shrimp paste? Keep reading, my friends.) 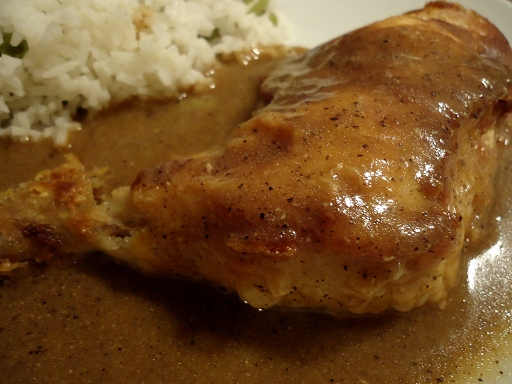 Black pepper fried chicken legs (recipe from "Chicken Leg" by Hoe Yee)
This dish is divine! The sauce is hot with pepper, tangy with Worcestershire sauce, sweet, salty and creamy. Plus the chicken underneath is crispy, so the mix of textures is wonderful. Perhaps I loved this dish so much because it reminded me nostalgically of chip shop curry sauce. Either way, it was a joy to eat. A note on the recipe: I was told to use plain flour, tapioca flour and wheat starch for the batter, but I couldn't find tapioca flour or wheat starch, so I just went with a mixture of plain flour and cornflour. As always, I didn't deep-fry my chicken as I was supposed to, but just shallow-fried it then shoved it in the oven. Also, the recipe tells you to use "a little cornstarch solution" to thicken the sauce, but doesn't say how much. I was maybe a little light-handed with the cornstarch solution, hence why my sauce wasn't quite as thick as it could be. But I don't care; it was yummy yummy yummy. 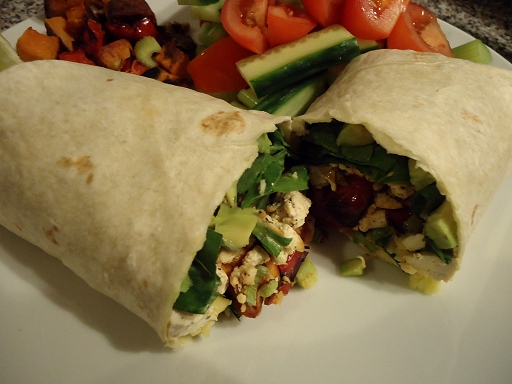 Vegan burrito
I decided to jump on the fashion bandwagon and try a vegan recipe, seeing as they're all the rage nowadays. It looked pretty good, with all the ingredients and flavourings, but there was something about it that wasn't quite right. I mean, there was a lot of flavour, but there was a lack of umami that made it less satisfying than it should be. Does this always happen with vegan food, or is it just this recipe? I could taste lime, onions, and sweetness (from the sweet potatoes and the peppers; in fact, it was too sweet for me; I'm beginning to realise I'm not a sweet potato fan), and the vegan cheese was creamy, but I don't know, it wasn't enough for me. Maybe it's because the tofu wasn't marinated at all, so it tasted unnervingly of wallpaper paste? Who knows? But it wasn't quite my bag. As an aside, the vegan cheese I bought was made of solidified coconut oil; it worked well, grated like this, but a word of warning: don't try to eat up the leftover cheese in thick slices, as you would with normal cheese. IT WAS LIKE EATING SOLID MARGARINE. Another aside: I bought an avocado that refused to ripen. I couldn't mash it and had to slice it instead! Have you ever eaten an unripe avocado? It tastes like sadness. 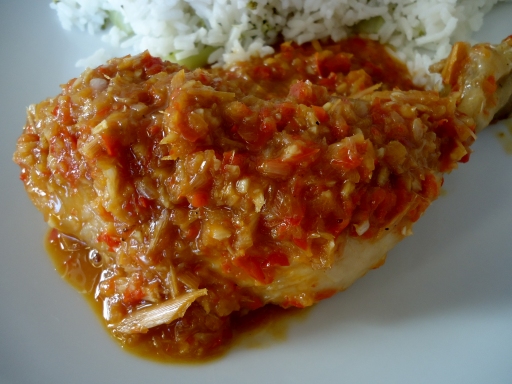 Indonesian chilli chicken legs (recipe from "Chicken Leg" by Hoe Yee)
I'll be the first to admit that this dish doesn't look great. The sauce is actually meant to be a smooth paste, but I used a food processor rather than a blender, hence all the unfortunate chunks. That wasn't what worried me with this recipe though. What worried me was that the ingredients list called for large quantities of chillies as well as dried shrimp paste. Do you remember the last time I made chicken legs with shrimp paste and hated it? Let's do it again, but with more chilli this time! Ignore me, I'm being melodramatic for no reason. It turns out that shrimp paste is pleasant when mixed with chilli, garlic, ginger and all the other stuff in this recipe. Add in the coconut milk too and it almost tasted like a Thai curry. It was hot, yes, but it was also sweet and tasty and the shrimp paste added a nice savoury, salty note to everything; in other words, a success! A caveat though: I'm not quite sure if I was using the correct shrimp paste. The recipe said to use dried shrimp paste, but I could only find the wet stuff, so I toasted it up in a pan until it had dried off (who knows if that was the right thing to do or not?) Also, again, the recipe said to deep-fry the chicken, but I just shallow-fried it then finished it off in the oven. 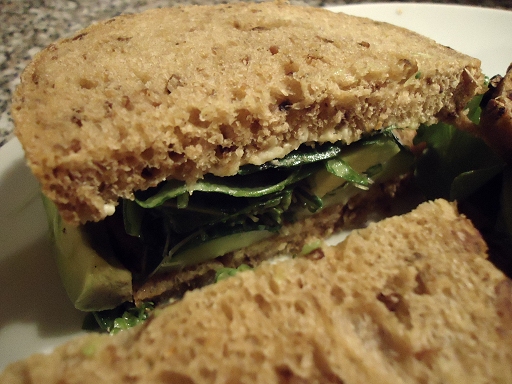 Green goddess sandwich
Now for another fashionable recipe, only this time it's vegetarian rather than vegan (there's blue cheese in there). I doubled the recipe to make two sandwiches, because I was eating this for dinner rather than lunch (turns out it was quite filling though). Despite the photo looking terrible, the sandwich actually looked quite good with all the green fillings (including a ripe avocado this time; I'm crying tears of joy). Alas, it didn't taste very nice. Maybe that's because I couldn't find malted grain bread, which the recipe called for, or rather: I found malted grain bread but it was malted grain sourdough. Did you know that I hadn't ever eaten sourdough before? I didn't actually know that I hadn't had it before, but my ignorance was revealed when I found myself surprised that the bread is as sour as its name suggests (it never occurred to me to expect sourdough to be sour. Stop laughing.) The overarching taste of this sandwich was therefore sour. You have sour lemon juice, sour blue cheese, and sour rocket, all topped off with sourdough bread. I couldn't really taste any of the other ingredients. Disappointing. 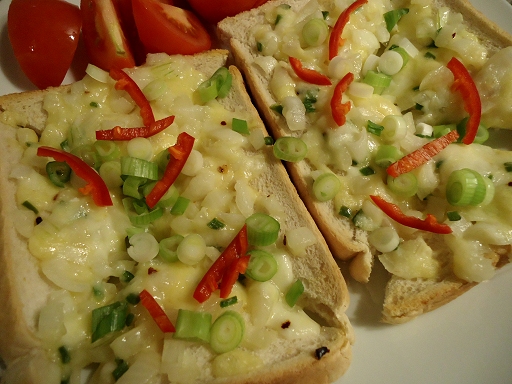 Chilli cheese toast
This recipe really livens up cheese on toast. (Again, I doubled the recipe, because I was eating it for dinner rather than a snack.) I normally find cheese on toast too greasy, so I was happy to try it with some toppings. And it worked! The onions really cut through the grease and made it more palatable. I'm not a fan of raw onion though, so I found the raw spring onions on top a bit much. The chilli was a nice addition but there was so much chilli! I don't know if the recipe is heavy on chilli or if I was just unfortunate enough to buy a very hot red chilli. But I was in pain. In actual pain. My lips stung for about fifteen minutes after this, and they went bright red as if I'd put on lipstick. Not really the result I was going for. But, with some tweaks here and there, this could be a really nice cheese on toast recipe (one tweak would be to toast the bread for a bit longer than I did, because it wasn't quite as crisp as it should have been. ALSO LESS CHILLI.) 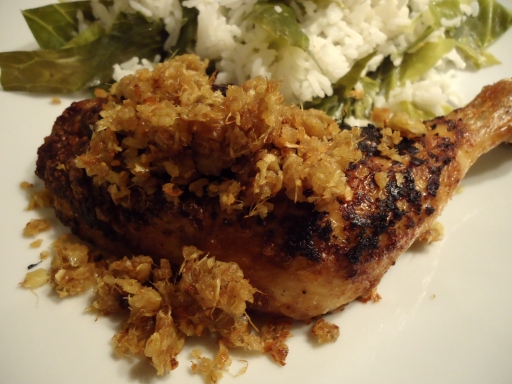 Crispy ginger and shallot chicken leg (recipe from "Chicken Leg" by Hoe Yee)
This dish includes my least-favourite thing: juicing ginger, shallots and garlic ;_; Add to that a marinating time of two hours and this becomes a very time-consuming recipe to make. Don't do what I did and try to make it on a day when you unexpectedly have to do overtime at work, or you'll end up eating at 11pm. Still, for all the juicing, this recipe at least has a solution for what to do with the remnants of the ginger, shallots and garlic once the juice has been squeezed out of them (well done Hoe Yee for resourcefulness). So, the recipe asked for tapioca flour in the marinade, which I can't get, so I used cornflour instead. Also, the recipe wanted the chicken to be deep-fried, but I shallow-fried it then finished it off in the oven. I was supposed to deep-fry the ginger remnants too, but I shallow-fried them. All this shallow-frying was my downfall. The marinade on the outside of the chicken ended up a little burnt (as you can tell from the picture), and I also managed to burn the ginger remnants as well, because I was trying to fry them enough to get crispy. All that burnt flavour (especially because there was garlic in there) left it a little bitter. Even if it wasn't burnt, the fried ginger and shallots had a really strong flavour; they're hot and powerful stuff. Not the best dish I've cooked from this book by a long way.

Well, for some reason the York post commenting form is refusing to load — possibly it realizes what’s going to get thrown at it, and it has wisely elected to opt out of existence in response — so I’ll go here next and try that one again later.

I hate avocados. I think they taste like Vaseline. Just leaving that there.

I think all your chicken legs look amazing, although I can’t help but feel like “frying the fibrous remnants of juiced mirepoix ingredients” is a really bad idea no matter what. I also think British cheese toast is weird and I can’t eat (savory) tofu without marinating it in Worcestershire sauce/Liquid Smoke first. Otherwise, though: STRONG 10/10 FOOD POST!!!!!!!

I had my first avocado as a child and absolutely hated it. You see, I was expecting a fruit, but what I got did not taste fruity. I had my second avocado about 8 years ago when they first started to become fashionable again, and I liked it a lot more. (They do taste like Vaseline though. I hadn’t thought of that before but… you’re right.)

I’m sorry the York post isn’t playing ball. The comment form is loading for me, so perhaps it’s worth trying again. If it still doesn’t work for you, let me know and I’ll go behind the scenes and see if there’s some button I can click to fix it.