Twelfth Night has come and gone, which means, apparently, that you have to STOP celebrating Christmas. That's it. It's OVER. From now on we just have the hard slog of winter to go. So don't go having any more FUN, you understand? It's not seasonal.

But, back when I was still celebrating, I did some things that went a bit like this:

NYE
I went to Steve's in Bristol for New Year's Eve. We were trying to recreate the fun of our student days by cooking ourselves a massive meal. Firstly, we had a food conference to work out what was going down, then we had a trip to buy ingredients, and finally, we had a 10 and a half hour, 11 course, cook-off show-down!

It was lots of fun. The 11 courses were as follows:

There was going to be a cheese and biscuits course before the coffee, but it was 2am by that point, and I don't think any of us could stomach any more food. Especially not huge hunks of cheese!

All the courses were really tasty, but I think one of my favourites were the banoffee pies, because I was dying for something sweet after all those savoury courses (in fact, I found it hard to eat anything savoury for the next two days).

Here's a picture of the banoffee pies in all their glory, as modelled by Steve: 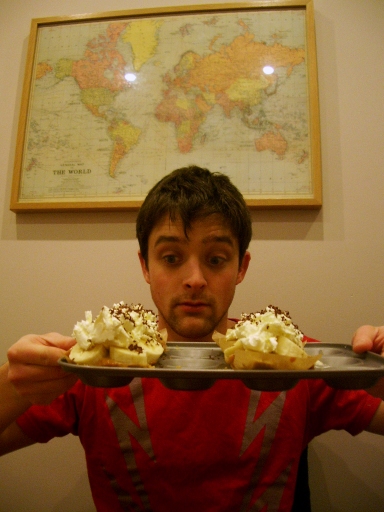 And, because Steve lives on a massive hill, we were able to walk to the end of his garden at midnight and watch the fireworks spread out over the whole of the city. Nice.

More Christmas presents???
A package from Mariya arrived the other day! There were lots of cute presents inside, but one of the cutest was this: 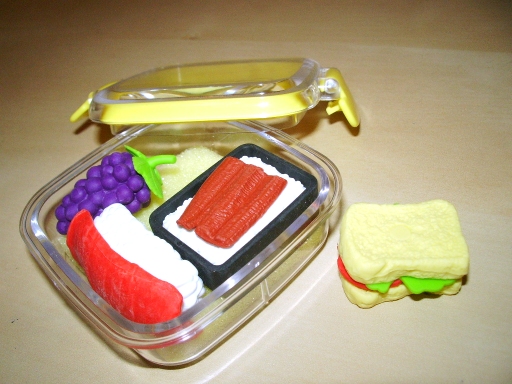 It's a teeny tiny bento box! (The photo is larger than life-size.) It's absolutely adorable.

Mariya also got me the first volume of Black Butler. I've heard of the series before, but I've not seen or read any of it, so it will be interesting to see what it's like.

So far, it seems like the butler, called Sebastian, swans around being a badass mofo, while his master, who's a twelve-year old boy, sits around looking unimpressed.

I shall have to wait and see how it progresses, but I already have a strange urge to draw Sebastian in breeches. That must be a good sign, right?

STARS
This week, the women people of Britain have taken a sudden and intense interest in astronomy, thanks to Professor Brian Cox Live Stargazing Live!

I have to admit, I was expecting it to be a bit boring (oh look, there's the Plough. Big whoop.) But actually (as happened with The Wonders of the Solar System) it was really interesting! Now I have a sudden urge to look up at the stars, whenever the weather decides to stop being cloudy, and see galaxies and all sorts of amazing stuff.

It also helps that co-presenter Dara O'Briain is a very funny man, and Professor Brian Cox is, well... (oh yeah, talk science to me, baby).

Musics
Songs of the moment include:

Yolanda Be Cool vs DCUP - We No Speak Americano - Very pop-y and dance-y, but I love it anyway. It's been out for ages, but I only just learnt its name.
Donna Summer - I Feel Love - Disco fun! I was listening to this mere moments ago, and annoying my neighbours by singing along at the top of my voice.
Lemon Jelly - Space Walk - In honour of SPACE! It's impossible to feel unhappy when listening to this song.

Right, that's it
Time to stop having fun now. Off with you, there's 2011 to be getting on with.

@Mariya: The meal was fun. You should try one yourself! The trick is to make each course quite small and to have large gaps between the courses to let the food go down :D

@Nick: You can’t force these things you know. Singing along to I Feel Love is a natural and delicate process that can’t be hurried along.

I am so honoured that MY course was your favourite. I am such a hobby cook.

Can you do a recording of ‘I Feel Love’ for Tobi? Although I hate to think what he would do while listening to it.

So glad that you liked the stuff :) I feel like such a celebrity, getting featured in a blog! Your New Year meal sounds amazing!!! I want in on the next one :p