So I gave my presentation yesterday. I didn't give it until the afternoon, and throughout the morning I was watching everyone else's and getting progressively more and more terrified and more and more sweaty. I had this feeling that my nerves would really show in my voice, and I hadn't even bothered to make my presentation interesting in any way, so it would be really dry.

But then I got up there and started with the line:
'So I considered giving this presentation as an interpretive dance, but then I figured that powerpoint was probably better.'
And everything just fell into place. I remembered what to say, and I made eye contact with the room, and I got quite a few laughs that I hadn't even expected at all.
Oh man, there is nothing better than the feeling of everyone's attention focused on you, and making a room full of people laugh is the best thing ever. I love giving presentations!
And when I was done my friend asked my how it went, and I said that I wanted to go again, and she said 'yeah, I wanted a second chance too, because I felt mine wasn't good enough', and I was like, 'No, I want to go again because that was really fun!'

Hahaha. I'm such an attention whore. (It does terrify me though.)

And now I've a really boring piece of coursework to do for Tuesday, and it's about management, and it's not a presentation at all, and I don't want to do it.

I did some token work today, so then I rewarded myself with cardigan-chan. 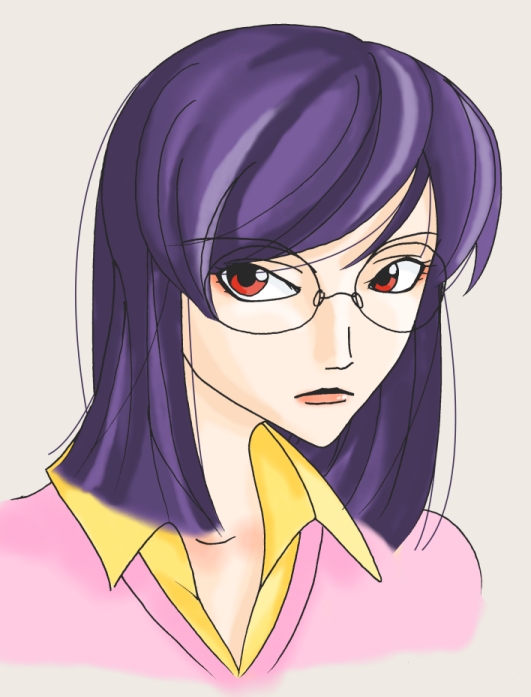 It's a little wonky I know. But what I was trying to get at with this picture, was to try to make him look as much like a girl as possible. I'm very much doubting now that Tieria is actually a girl, because apparently the director has stated that he is male (but I don't know the direct quote, or where it was from, so it's all just hearsay really). Anyway, whether Tieria has man bits or not, what we do know is that he looks like a girl, because he's confused at least two male members of the cast.

All I do know is that he should smile more, and that I should really look my drawings over before I go ahead and colour them.