Man, it feels like Christmas was ages ago. Now all we're left with is cold, wet (and sometimes snowy) January. Oh, and Sherlock is on too. I don't have time to write up my normal Sherlock reviews, so here's a very quick lowdown of series 4:

The first episode was so bad it made me question why I was still watching this show. The second episode was quick and funny and amazing and everything Sherlock does best. So, swings and roundabouts really. Will the final episode in the series be as good as the second? Who knows? But there aren't many more hours until we find out!

Right. Back to my Christmas blog post, which seems to be an annual tradition for me. This year Christmas was good, and was actually relaxing for once! I learned from previous years and made sure not to schedule too much in. I also took myself away from my parents and back to London for a few days in the middle of things, which was a great way to recharge my batteries.

As well as visiting parents and family, I saw a few friends. This included visiting Steve and Heather and William in Bristol for New Year. Almost everyone was there: James and Eppa with Rene and Jack; Nick; and Linda with Alex and Cara. I'd never met Cara before! She is tiny and cute (and was well-behaved). It was lovely to have everyone together, even if Linda and I only crossed paths for 45 minutes. Smooches to you all!

That was the people-side of things. When it comes to the materialistic-side, we have the following: 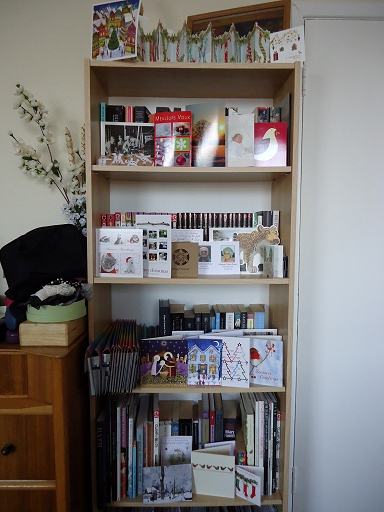 Christmas cards. I seemed to receive a lot of cards this year. It was difficult to fit them all on the bookshelf! 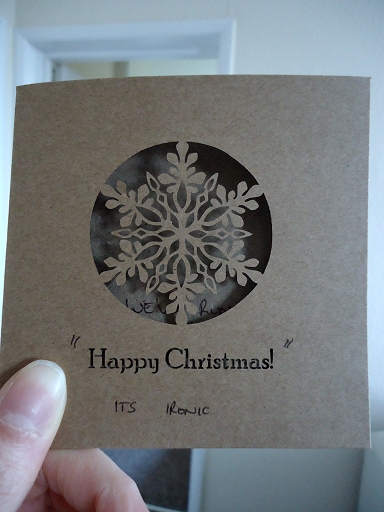 A special card mention this year goes to Steve and Heather and William for another very stylish hand-made card. Also, it's not ironic; I don't believe you. 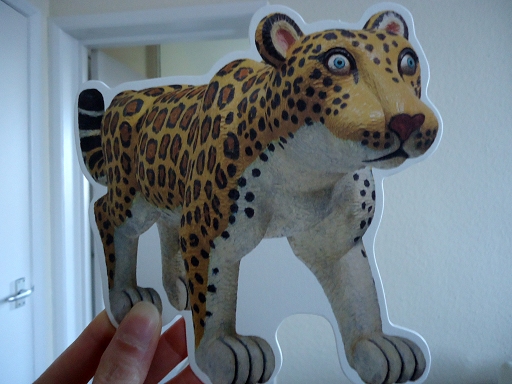 A second card mention goes to Mariya for this staring leopard. Yeah. That's how I feel when Christmas is over too. 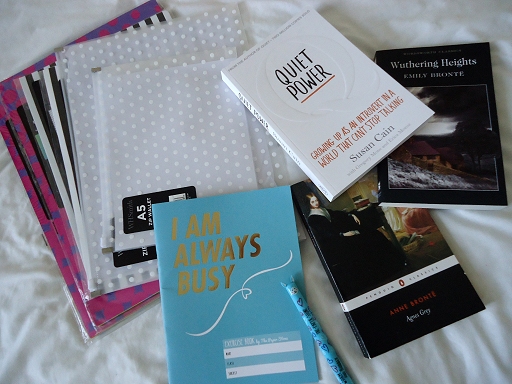 On the present-front, first up is books and stationery. One of my resolutions is to tidy up my filing system. Hopefully these folders from my parents will help.

The cute notebook and pen are from Mariya and will help me feel busy and important at all times.

As for the books, I read Jane Eyre last year and enjoyed it, so for Christmas I requested that my parents get me MORE BRONTËS. I didn't actually watch that drama about them that was on over Christmas. Did any of you folks watch it and was it any good?

Oh, and I requested Quiet Power from my parents too. I didn't realise that all it is is a rehash of Susan Cain's first book, but for a YA market. Useful for some, I'm sure, but I wouldn't recommended it if "speaking up more in class" and "working out what you want to do with your life" aren't on your radar. 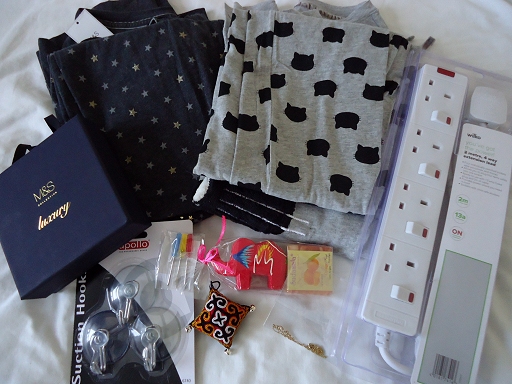 Next up is the clothing, accessories and housewares section. (Shut up, it doesn't have to make sense.) Pyjamas from my parents, including cute cat pyjamas :D and Mariya continued on the cat theme with a tiny, adorable cat necklace (which I'm wearing right now).

There's also a soap from Mariya from Bali, various housewares, and the box that says "luxury" on it contains a purse from my parents. 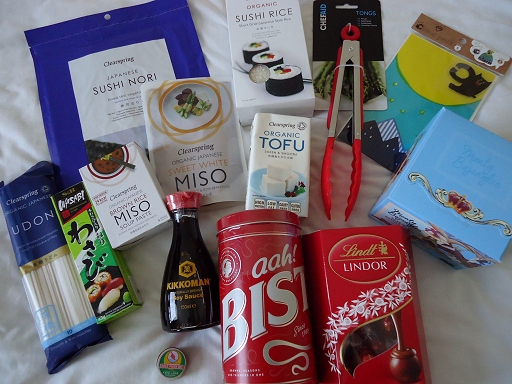 And then we have the cooking and food section, featuring CHOCOLATES from my parents and from Asia, some plastic bags with slightly scary cat-shaped ties from Mariya, and powdered Bali vanilla from Mariya too (I've been putting it in my hot chocolate!)

Also pictured is a tonne of Japanese ingredients from my secret santa. Thank you, secret santa, whoever you are! (Because you are totally still secret of course.) I have been cooking a lot of things with them, the results of which you'll see in my upcoming food post (whenever I write it, which will hopefully be soon). 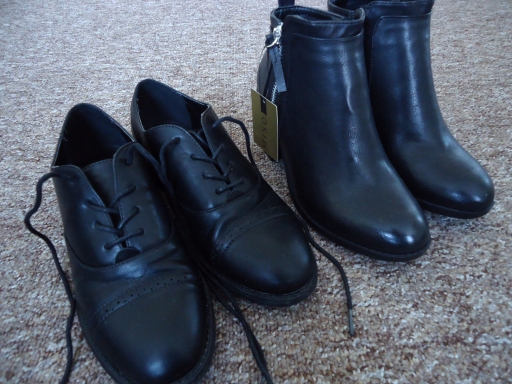 Finally, I did the same thing I did on my birthday, which is that I indulged in buying some shoes for myself, and later received money from my Nan to help cover some of the cost. Thanks, Nan!

That's it for present-talk, but not for grandparent-talk. If you have been following my blog posts you will have read that I lost two grandparents this year (leaving me now with one only; she of the shoes). 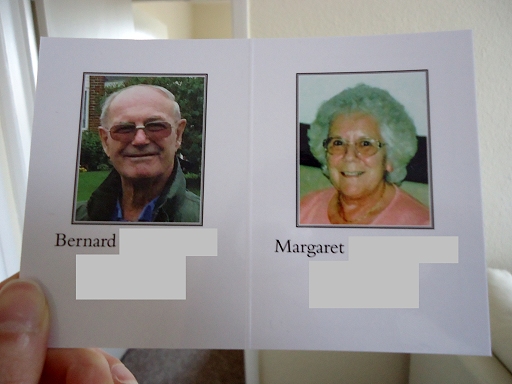 The two grandparents I lost were my Mum's parents. My Nan died in the spring and my Granddad lasted only six months without her. One of my aunts sent this memorial card in with her Christmas card to me. Apparently it's a normal custom in Ireland. I think it's absolutely lovely.

These two folks meant a lot to me. They looked after me a lot when I was a child so they were always close to my heart. Just recently, I've been wondering what I inherited from them, and I think it was a lot:

- The ability to sleep easily (thanks, Grandpa Bernard)
- Appearance (both of them, including shortness (Nan) and glasses (Granddad))
- Stoicism and patience (thanks, Nanny Margaret)
- A love of maps and history (thanks, Grandpa Bernard)
- A knack for science (thanks, Nanny Margaret)
- The ability to organise things well (I don't know who this comes from, but MY GOD it's gone through the whole family. We are punctual to a fault. Turning up on time to a family gathering, rather than turning up at least five minutes early, is seen as almost as bad as turning up half an hour late.)
- A love of walking and the countryside (both of them, very much so)

And because the love of walking has also gone through the whole family, we went for a family walk at Christmas to give them both a good send off and to scatter my Nan's ashes (my Granddad was buried rather than cremated, so scattering him would have been rather difficult).

The walk chosen was a favourite of my grandparents'. My Granddad had already chosen it and started making arrangements when he passed away (this was at least three months before the event; I told you we were good at organising.) On the day we finally went, it was cold and rather misty, which made it very atmospheric. Let me leave you with some photos: 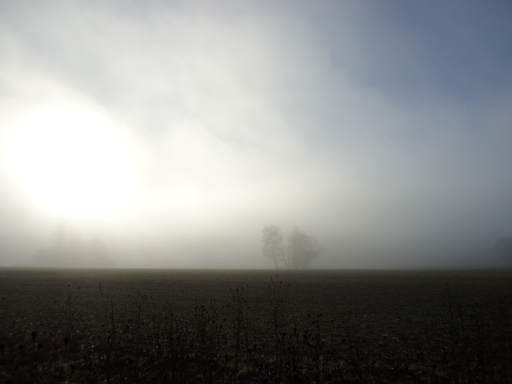 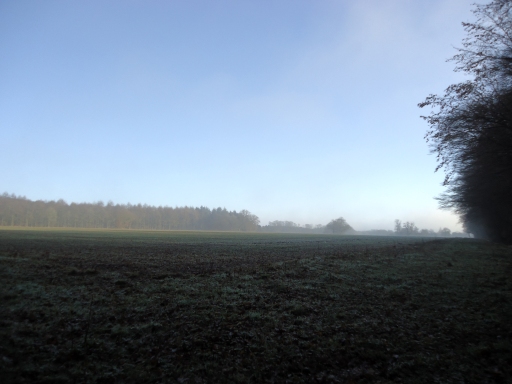 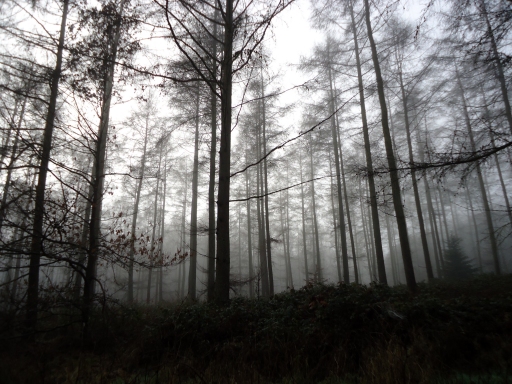 Your grandma sounds like she was someone with a wonderful sense of humour.
That is certainly one way of thinking about my grandmother!

‘Taboo’ is airing on FX in this country, and I’ve been meaning to catch it on-demand, but my internet/electricity situation has been dicey. Jesus, that sounds terrible. “THE GUV’MINT DON’T GET NO ‘LECTRIC DOWN HERE IN THE HOLLER, HYUCK!” It don’t, though! I have nothing whatever to watch right now (one can only go through so many episodes of ‘QI’ per day), so I will check it out soon. I didn’t know Edward Hogg was in it! Bonus content.

But I’m sure Kate Beaton’s “Dude watchin’ with the Brontës” mostly covers it.

They wrote such terrible dudes to be love objects, didn’t they! If I’m going to construct a man out of whole cloth, he’s gonna have an irrepressible need to do housework and tell me I’m perfect ten times a day.

Fingers crossed that your electricity situation improves! You must have the patience of a saint to put up with all that.

Well, I’m sorry I missed the Christmas post by such a long distance! Better late than later, probably.

First of all, I’m so, so sorry, again, about your grandparents. They seem like they were really lovely people; I think you look a bit like both of them. I also love it that you chose to remember them by identifying all the things about yourself that they contributed to creating. That’s just the sweetest and most wonderful thing ever! It’s so sweet! That’s how you do it. I also think that taking a walk to honor/remember them is a beautiful idea. My grandmother asked that her ashes be scattered on our family farm — which is now a fracking-water treatment plant. My mother and I had to scuttle into the parking lot during the lunch hour last summer, scatter some ashes (which I got in my mouth and eyes), and burn rubber out of there like the Dukes of Hazzard before security noticed us. “She did that on purpose!” my mother said, hunched over the steering wheel and driving 87 mph down a rural blacktop road that would’ve been narrow for a horse. It was, on balance, perfectly appropriate.

Yours is better, though.

Those photographs are also incredibly gorgeous. You have a real photographer’s gift for suggesting emotion within the confines of the frame’s edges. I still think you should enter a photography contest somewhere.

Your presents all look great, too! The boots and cat pj’s are too cute. And that die-cut card is also really awesome.

Speaking of cutting things — I recently read Wuthering Heights, myself, because I am steeped in self-hatred. It caused me to experience many disturbing revelations, including the forced acknowledgement that every single fictional character I have ever had a crush on throughout my whole life has been a slightly nicer version of Heathcliff.

I didn’t actually watch that drama about them that was on over Christmas. Did any of you folks watch it and was it any good?
I heard that Level 11 Anglo Dreamboat James Norton played the Duke of Wellington (!) in some kind of flashback or something (?), but I haven’t watched anything on teevee for six moths besides Charlie Brooker and old episodes of QI. Don’t laugh, I’m fragile.

That is a great ashes-scattering story. It’s certainly something you’ll never forget! Your grandma sounds like she was someone with a wonderful sense of humour. I would like to be remembered in an equally-difficult way when I go.

Thanks for the comments on the photos! Oh man. I wish I could say I was thinking of emotion when I was taking them. But mostly my thought process was: “Ooh, pretty mist. Oh shit everyone’s walking off without me. Quick! Quick!” followed by frantically trying to put my camera away with freezing cold fingers whilst running. (What you don’t see are all the photos that didn’t make the cut to go online!)

I will let you know how I get on with “Wuthering Heights"! I am still on my reread of “The Name of the Rose” at the moment, and am beginning to wonder why I thought that would be a good thing to do. (Turns out it’s still on the dry side, even the second time around.)

I never did get around to watching the Brontë drama. But I’m sure Kate Beaton’s “Dude watchin’ with the Brontës” mostly covers it.

Speaking of alcoholic dickbags I have taken up watching Tom Hardy’s “Taboo". It is ridiculous and compelling in equal measure. As you might guess from the name, it is trying to be as dark and as gritty as possible, and is doing it to laughable excess. But at the same time, it is made well and the acting is top-notch. In essence, it’s worth watching if you like: Tom Hardy frequently naked, Edward Hogg playing Godfrey aka the most darling muffin since John Segundus. (Godfrey must be protected at all costs.)
Here’s a trailer: https://youtu.be/rmg8RDntkLc
Probably not the sort of show to watch if you’re being kind to yourself, though. I’d stick to “QI” for that. (And maybe the “Great British Bake Off” if you have a way to watch it.)