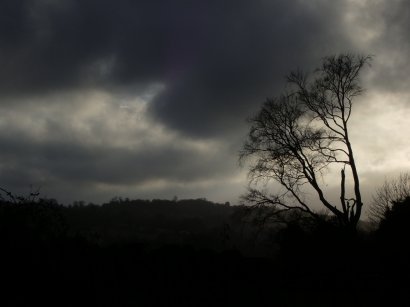 Hahaha! Did you think I was lying? Nah, I'm just mixing things up a bit. I did take the photo today, but the weather was nice. Alright, it was a bit rainy, but once the rain had gone it was so warm! I didn't have to wear my gloves or anything! You know, the more I describe the weather, the less nice it sounds, so I think I'll leave it there. It was nice though. Spring's on its merry way, I can feel it it my fingers, I feel it in my toes. Woah! Wet Wet Wet joke there! Coming at ya, be careful! Ow!

So I went to visit the masonic temple yesterday evening. It was so interesting! The whole place was packed full of masonic imagery and symbols. Dear lord, the curiosity beast had me by the ankles and was swinging me round. The building itself is interesting; I saw some 400 year old bits of wood. They had a room out the back for the knights templar. There's not much that perks up my interest more than mentioning the knights templar (I blame it entirely on the Borken Sword computer game of my youth). But, by crikey, I felt embarrassed when I admitted to reading the Da Vinci code! We weren't allowed to take photos, because they're worried that someone might go and spread them about, like putting them on the internets or something >_>
So. Much. Nonsensical. Tradition! I love it! The actual reality of being a mason sounds a bit boring though, unless you want to spend your nights sitting around with a bunch of conservative old men in aprons.

Went to Nando's for lunch today. I'm full of chicken now, like Bernard Matthews (shut up I know he does turkey).