If you are wondering, the title to today's post is a punchline from Black Books that has kept me grinning to myself all day when I remembered it. I even had to stop what I was doing for a few minutes at one point to have a little laugh to myself. If you can remember the scence from which this comes, then well done to you.

Speaking of comedy programmes; while my parents were here I watched a little TV in their hotel room. I don't have a TV myself, so I've seen very very little American TV (yes I know, I'm rubbish). So we were watching MTV and saw this programme that was really quite funny. I later found out that this was called the Andy Milonakis show. So yay for that, I wonder if I'll ever get to see it again.

My parents have gone home now. Yesterday I was upset about this, but today I am better. I think I may be swayed by my hormones at the moment, but it's hard to tell.

I had a good birthday. It wasn't a big fancy do like most people have for their 21st, but then I never wanted a big thing. It turns out that I had my parents here with me, and that's just what I wanted.

We did stuff while they were here. You know, New York stuff. I think they liked it.

We also went to see Charlie and the Chocolate Factory. It wasn't superfantasmic like I was half hoping it would be, but it was good. It was also better than the first film, although I may just think this because I saw the first one when I was young and impressionable and it freaked me out. I am very glad that the oompa loompas are different, they amused me this time. I realised while watching it, that all the good parts of the film come from the book. This is slightly dissapointing in some ways, but very good for a book purist like myself. It is nice that the good Roald Dahl stuff shines through.
It was odd when I would recognise sentences that had word for word come from the book. Now this I would expect from myself about LOTR, but Charlie and the Chocolate Factory? It seems that I know the book better than I thought. And now that I think about it, it is perhaps the only Roald Dahl book that I owned and didn't borrow from the library, and I can remember many times when I felt bored and just re-read the book (it's odd how this fact had completely skipped my mind). I think I was a fair Roald Dahl fan back in the day, but I never really considered it because, well, wasn't everyone? Seriously though, those are some good children's books there.
One theme I've noticed in all his books, and in the film a well, is that of relishing the imagination of children. So many times, the sensible adults are seen as dull, boring, and often, bad people. It seems that Willy Wonka is almost a personification of this childish fancy. Many of the things in his factory, don't make sense and would not work in the real world. The adults, and many of the children, call him up on this, stating that these things are stupid or impossible, but he just avoids or dismisses their questions. Of course these things can't be impossible, because they are there in his factory, and it is this kind of twisted logic that makes the factory what it is. We, the readers (and watchers) are being asked to suspend disbelief and just enjoy the fantasy. And this is what Roald Dahl tries to get across in so many of his books; imagination should be cherished rather than discouraged, and if people manage to keep hold of their imagination, then they will be all the better for it.
I must have been quite the fan when I was younger, as I seem to have taken this message to heart somewhere along the line.
So...the film was good but not great, and anyone who hasn't, should go read the book, and any others by Roald Dahl (the Witches was a favourite of mine).

I also went to the hello kitty store and bought myself a new bag. 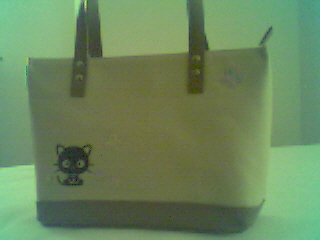 It is excruciatingly cute. I love it.

And that is all of note that I wanted to tell to you today.