So I went to see Sherlock Holmes: A Game of Shadows today. And I was planning to write a review about it and the explosions and the japes and the Stephen Frycroft etc etc

But then I got home and discovered that ALL THE THINGS HAVE HAPPENED.

But, while that is exciting, look look over here!

Four new trailers for the second series of Sherlock!
Oh, be still my beating heart! LOOK AT ALL OF IT. Ahhhhhh. I can't believe I have to wait for over a week before the first episode airs. The agony!
Molly Hooper's blog has updated too!
And apparently The Science of Deduction has also updated, although I can't actually see any updates myself. I am so excited I must have gone blind!

Also also, I had my last day at work today and Nick, Steve and Heather are coming to visit tomorrow and I'm really looking forward to it!

Sherlock advent drabbles :D (I know I'm a little late today. Shhh. I won't mention it if you don't.)

Here's the thing. I really dislike spoilers. Really really. Which means that I try to stay away from anything spoilery as much as is humanly possible.

But then there were these short clips released from Sherlock - A Scandal in Belgravia and they were released as teasers by the BBC media team so I figured they wouldn't be too bad to watch (and they're not, I don't think?)

And now I'm all excited :D If you don't mind watching them either, they can be found here. (I have deliberately stayed away from the YouTube comments though, so I have no idea if any of those are more spoilery or not. I'd rather not risk it, to be honest.)

But if you can't bring yourself to watch it. Have a spoiler-free summary:
Oh, it's fun! And I'm humming the theme tune already and LATERS! and, my, that is a lot of clavicle.

Another thing I have just watched is the ending of the second series of The Killing, The Killiinnng, der der de der derrrr derrrr derrrr derrrr. The spoiler-free summary of this is as follows:
Man, this was as tense and exciting as the first series. Maybe even more-so because they packed it all into ten episodes. I think I was actually laughing with joy at the end there. (Not because it had jokes in, mind, but dramatic and tense scenes tend to make me laugh in a 'wow, I am enjoying this a lot' kind of a way.)

And now I'm trying to work out who would win in a fight between Sherlock Holmes and Sarah Lund and I honestly don't know. All I know is that I kind of want one of Lund's jumpers because then I could feel like a tough, no-nonsense, slightly-unhinged police lady.

Laters, guys! (God, I'm going to be unbearable for the next few weeks. I apologise in advance.)

And the countdown to Christmas begins!

I feel like I really need a Christmas holiday this year. Work has been fairly stressful recently and home-life has been a little stressful too, so I think I need some time to wind down.

On a positive note, writing these advent drabbles has been so much fun (for me, at least, maybe not for you :D) even if somedays it takes me a while to work out what to write. Currently, I'm looking at today's prompt and making a :/ face.

Also, last weekend, I went to visit Deborah and we tried out her new chocolate fountain! 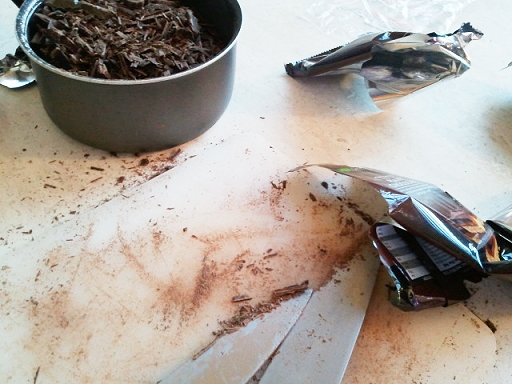 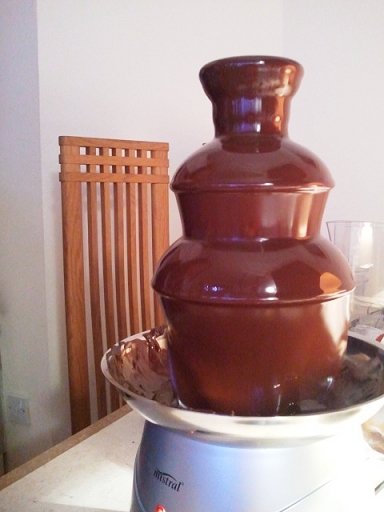 Oddly enough, it doesn't taste as great as it looks, but it is ridiculous amounts of fun. That is, until you've both eaten far too much and have to lie on the sofa groaning. Good times.

I hope you're all having good pre-Christmas weeks! I always prefer the build-up to Christmas to the big day itself. And don't listen to too much Slade, now, will you? It's not good for you in large quantities but can be enjoyable as part of a varied diet.