I've accumulated a million more food photos (ok, eight). Let's get on with it! 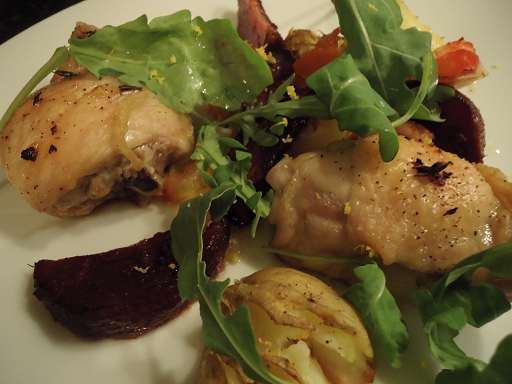 Lemon thyme chicken with roasted balsamic beetroot
This recipe was nice, but nothing spectacular. You go to some effort to put balsamic vinegar on the beetroot, and lemon and thyme on everything else, but mostly it just tastes like roast chicken and potatoes. I certainly wasn't getting much balsamic vinegar or thyme when I was eating it. Thankfully I like roast chicken and potatoes quite a lot, so it went down well. The main problem was that the portions were tiny! Two new potatoes per person (or thereabouts) does not a dinner make! 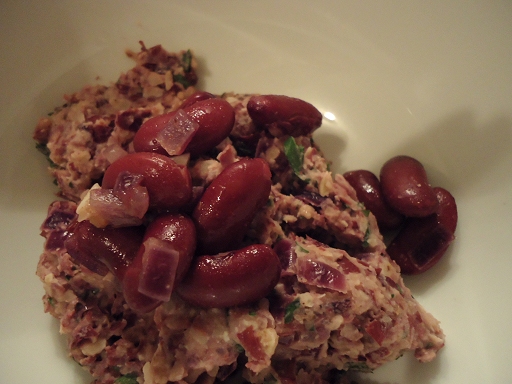 Lobio (nutty bean dip)
I hadn't heard of lobio before I tried to cook it, so I had no idea what I was going to end up with. Turns out it's this! Texture wise it was, admittedly, more of a spread than a dip, but I think that's because I cut down the quantities in the recipe and so the reduced amount of liquid boiled away too quickly. Regardless, this was tasty. The spice gave it a warm flavour I wasn't used to and the onions were slightly sweet. Not super amazing, but it went down pretty easily! 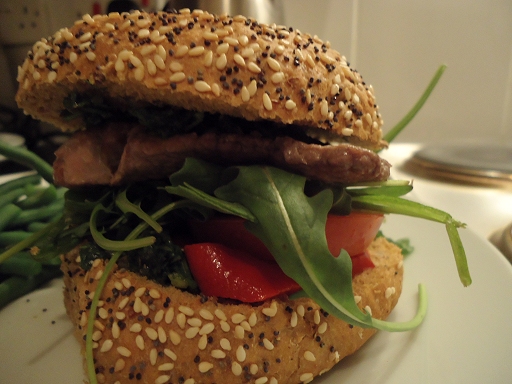 Chimichurri sandwich
Next up was chimichurri. I'd actually heard of chimichurri before, although I had no idea what it was. It is, it turns out, a sauce made from lots of fresh herbs, garlic and chilli. And it is absolutely delicious! The actual steak part of this sandwich was less good. More of a disaster, actually. The recipe asks for 'sizzle steaks'. I have no idea what 'sizzle steaks' are, but I thought that thin sandwich steaks would do. THIN SANDWICH STEAKS WOULD NOT DO. It seems that the steaks I bought needed much more cooking than two minutes in a pan. Oh, they tasted fine, sure, if you like a nice taste that accompanies the texture of shoe leather! Pretty much the whole sandwich (bun and all) fell apart as I was trying to bite through this steak, which left me holding onto nothing more than a piece of meat in my bare hands and gnawing away like my jaw was going to fall off. In summary: don't use sandwich steaks, but do make chimichurri sauce. It's got a sharp, fresh taste that goes really well with beef. I bet it'd be great on a burger. 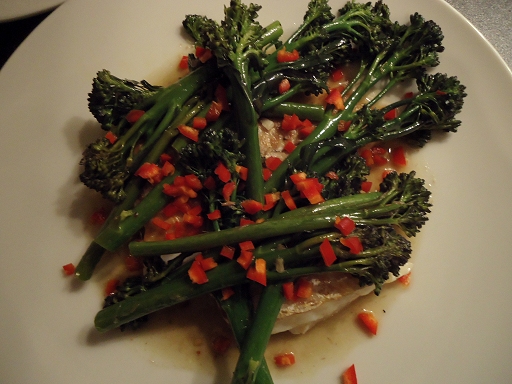 Cod with broccoli and chilli (recipe from "Nigellissima: Instant Italian Inspiration" by Nigella Lawson)
Nigella really sang the praises of the broccoli when introducing this one. Apparently, broccoli is amazing in this garlic, chilli, anchovy sauce. Personally, I found that the broccoli tasted like broccoli and not like amazing! broccoli. (Maybe it's because I left out the Vermouth?) To be honest, though, I prefer my broccoli more well done than this. That said, the sauce goes amazingly with the fish! Really salty and nice. And I had never in my whole life pan-fried cod before. It turns out that pan-fried cod is super easy and super tasty. It has since been added to my repertoire (the pan-fried white fish part, not the broccoli and anchovy sauce part). Oh, I tell you what though: Nigella recommended fresh red chilli as a garnish, but I think I went a bit overboard with mine. The whole dish was uncomfortably hot (which, come to think of it, is maybe why I wasn't so enthused with the broccoli). 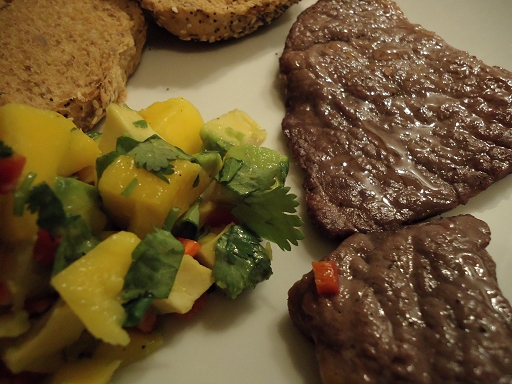 Grilled steak with lime and mango salsa
I tried out this recipe as a way of using up my sandwich steaks and my fresh chilli. You're meant to barbecue the steak, but since I don't have a barbecue (and it's autumn!) I shoved them under the grill instead. I did grill them for longer than was suggested in the recipe, but it wasn't long enough because they were still kinda tough (I think I may have just bought really bad steaks). Also the marinade on the steaks tasted mostly like nothing? The steaks were most definitely not the greatest thing in the world. The mango salsa, though, was really nice. I think perhaps I just love anything that contains mango and/or coriander. It made the steaks a lot more bearable. The only issue with the salsa was that it had too much chilli for my liking; it was uncomfortably hot again. I don't know why I'm surprised about any of this. 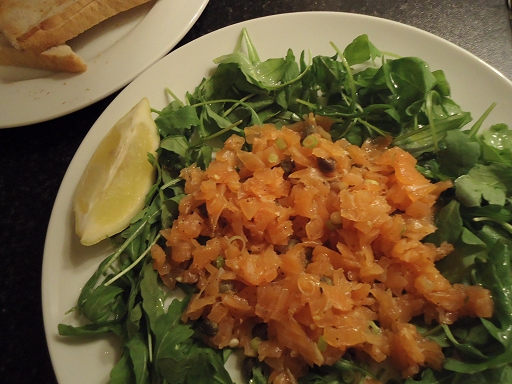 Tuscan smoked salmon tartare (recipe from "Nigellissima: Instant Italian Inspiration" by Nigella Lawson)
Ok. This is perhaps the stupidest thing I have ever made. And I am not blaming Nigella; this one is all my fault. You see, Nigella's recipe is for Tuscan tuna tartare, not smoked salmon. I mean, can you even call it 'tartare' if smoked salmon is involved? (Answer: just don't try making this and you won't have that problem. Seriously: don't make this.) But my supermarket doesn't sell tuna that's good enough to eat raw, and I am far too lazy to go to one of the multiple fishmongers in the city that would sell me decent tuna. Hmm, thought I, what fish can I eat that's kinda raw? I know! Smoked salmon! And the thing is: this dish was really nice with the smoked salmon. Like, really tasty. I bet it's gorgeous with some proper tuna, and you feel so sophisticated if you eat it with the little bits of toast that Nigella recommends! It is good! It is also incredibly salty! Jesus Christ! I only normally eat smoked salmon at Christmas, and I had utterly forgotten that it has lots of added salt. So I blithely added the capers and the extra salt in the recipe (which would be a lot of salt, even for fresh tuna, I reckon). So salty. So saltyyyyy! Thus began the period of Great Dryness in my life, in which I spent about four days guzzling water. Even now, I'm not feeling keen about salting food as much as I normally would. My body is just like: nope, nuh-uh, don't need any more right now thank you very much. So. Don't be stupid like I was and make this with smoked salmon. But do make it with tuna, because I reckon it would taste fantastic. 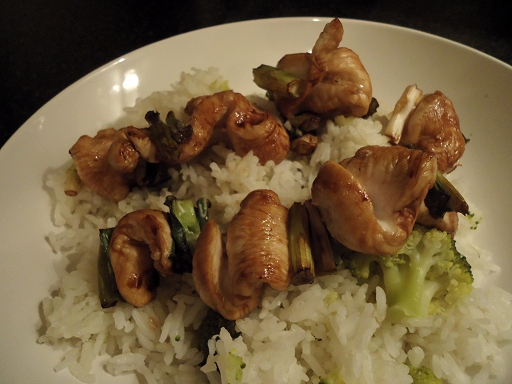 Yakitori
I couldn't be bothered to buy any mirin for this, so my yakitori was a bit bland as a result (it tasted like chicken and soy sauce and spring onions). I couldn't be bothered to buy bamboo skewers either and just used my normal metal ones. That said, I tried this again the next day and cooked the skewers for longer and they turned out much better. The sauce got all caramelised and chewy with the longer cooking, and that was rather nice, especially with the spring onions which had turned rather sweet themselves. 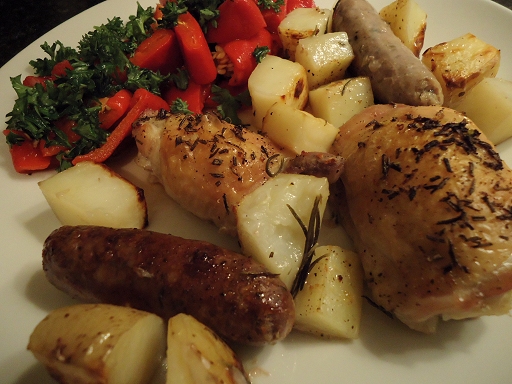 Italian traybake (recipe from "Nigellissima: Instant Italian Inspiration" by Nigella Lawson)
Well done to Nigella for this one. It's really easy and really nice. You basically throw chicken thighs and some sausages together with lemon, rosemary and olive oil, then bung it in the oven for an hour. Job done! It comes out really nice and brown, with plenty of juices that leave everything moist and tasty. There's a lot of meat in this, which is rather indulgent, so it's filling even if there aren't as many potatoes as I'd normally eat (well, the recipe was for four to six people, and I gleefully decided on making it do for four). Nigella recommended bread alongside, but I'm glad I didn't bother with that. What Nigella did recommend as a side, though, was roasted peppers with parsley, olive oil and vinegar, which I went for. This was really nice, and helped to counteract and greasiness from the meat. Overall, this dish was filling, tasty and easy-peasy.

I enjoyed this entry! But I won’t be buying sandwich steak!

Sandwich steaks aren’t too bad on other occasions. I’ve bought them before because they’re quite cheap. But they’re definitely too tough to go in a sandwich!