Hey all! I've been mighty busy recently. Mostly I've been getting increasingly tired and then getting ill. Commuting T_T

Oh, I also went to Norwich last weekend to see Theresa and Colin (and Jake) and their house. I saw a tractor and felt like I was well in the country. 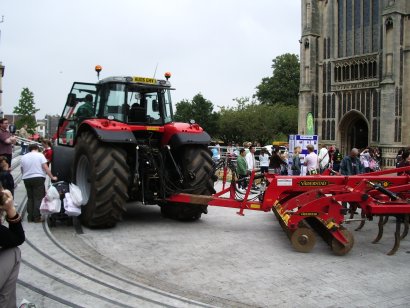 The do was Colin's birthday and he was having a Murder mystery party with his friends. I was there to make up the numbers :D 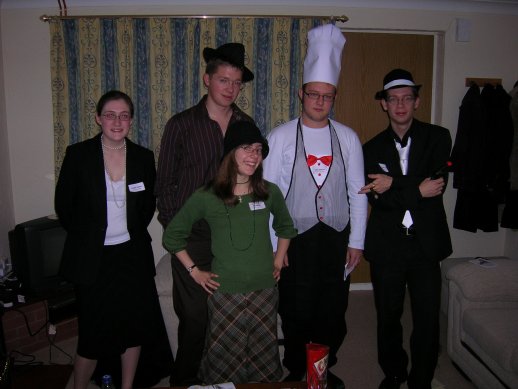 I was playing an Irish hitman, hence the green. I like the fact that even though it wasn't my party, or my house, I didn't even know the majority of people there, I insisted on being centre stage in the photo.
Me: 1 Rest of the world: 0

Seeing as the new anime season started not too long ago, I've taken on a lot of new series to watch. It turns out that most of them are awful. Here is my rundown:

Asatte no Houkou: The character design and story were kinda cute. I don't think it would be too difficult to keep a mild interest in what's going to happen. But I don't feel like target audience enough to enjoy this one, slightly too much fanservice for the male viewers I think. I don't think I'll continue watching.

Bartender: This looked interesting and then turned out to be boring. The first episode was about a man who hated bars, but the amazing bartender made him love them again. WHY AM I SUPPOSED TO CARE? I've watched one episode but no more.

Busou Renkin: This seems to be the easiest to watch of the shounen 'fighting-monsters' animes that I've seen this season. The main character, I forget his name, is quite amusing. The plot, however, doesn't hold my interest at all; I'll probably stop watching it.

Code Geass: I've only watched one episode so far. I'm not normally a fan of mecha at all. But the animation in this one is nice and I have to keep watching it because the character design has CLAMP all over it. Pretty pretty characters! I can see two Fay lookalikes, one Syaoran lookalike and the main character has Kamui written all over him, he even has the cape!

Death Note: As I've said before. This is briliant! I've watched the first three episodes now and I'm loving it. I love the tension and the suspense that is as much due to the background music as it is to the good animation. I'm very intersted to see where the plot will go, I also love the fact that Light is completely mental. (Although hearing Light with Tamaki from Ouran's voice is slightly disconcerting.) I can't wait to see more of this.

D.Gray-man: Another monster fighting shounen series. As such, the plot isn't doing much for me. The character design and animation quality are ok, but historical inacuracies are annoying me. WHY IS THE GIRL WEARING A MINI-SKIRT BEFORE THEY'VE EVEN BEEN INVENTED? OH GOD! I think the only reason to keep watching this would be for the guy in charge at the organisation, because he seems a little deranged, in an amusing way; I don't really think that's reason enough.

Ghost hunt: I don't really know where to place this one. I think I'm watching it because the character design is ok. The plot may turn out to be interesting too. Hmm...I've only watched one episode, so I'll watch another and see.

La Corda D'Oro: I think this is the kind of series that Ouran High School Host Club was parodying. Girl sees fairy, fairy gives girl a magic violin, girl has to compete in music competition with a group of bishounen from her school. I'm betting that they all fall in love with her...but who will she choose? Haha, the concept is laughable, but the character design is kinda nice, and I might continue watching it for a bit because I'm a loser.

Le Chevalier D'Eon: I've been watching this one for a number of weeks now. I am completely unable to understand what's going on with the plot; the animation quality is often less than nice; and D'Eon, despite looing like a lady, is kind of annoying. But I do like the more realistic character designs; and I adore the pretend historical accuracy that they're going with in the ending credits. I'm going to keep watching it.

Nana: Still watching this one. I am sort of embarrassed that I'm enjoying an anime with so much shoujo drama, but I do enjoy it! I don't really care about Nana's lovelife, but both Nanas are quite endearing, and I do enjoy a story about making a new life in the big city, seeing as that's how my life is headed right now.

Red Garden: This one is really weird. The character design is unusual, and by unusual I mean ugly. The story seems kind of harrowing in a tiring way, and what's with the singing in each episode??? I may watch a bit more of this just to see where the plot is trying to go, I'm not sure.

Shounen Onmyouji: As soon as I saw the name of this show I thought of Subaru ^^;; I wish this show was about Subaru, it would be better. The character design didn't look to bad for this one. The plot looks kind of like uninspiring shounen fair though. Hmm...I've only watched the first episode, so I'll watch one more before I pass judgement.

Tenpo Ibun Ayakashi Ayashi: This one looks like it might be ok. I think I'll have to watch a little more to see.

Yamato Nadeshiko Shichi Henge: Watched the first two episodes. This is a rather manic, unfunny comedy. Even four 'bishounen' won't get me to watch any more of this.

So, the ones I'm definately going to keep watching.
- Nana
- Le Chevalier D'Eon
- Death Note
- Code Geass
- The last few episodes of Tsubasa Chronicle (even though I'm aghast that they travelled from Rekord country into filler episodes)

No, they’re steps. There are no trams in Norwich; I mean, they only got electricity five years ago. HARHARHAR. (How to make the people of Norwich hate you with one easy sentence.)